The Australian anti-abortion movement wants to learn from and replicate the campaign to overturn Roe vs Wade. 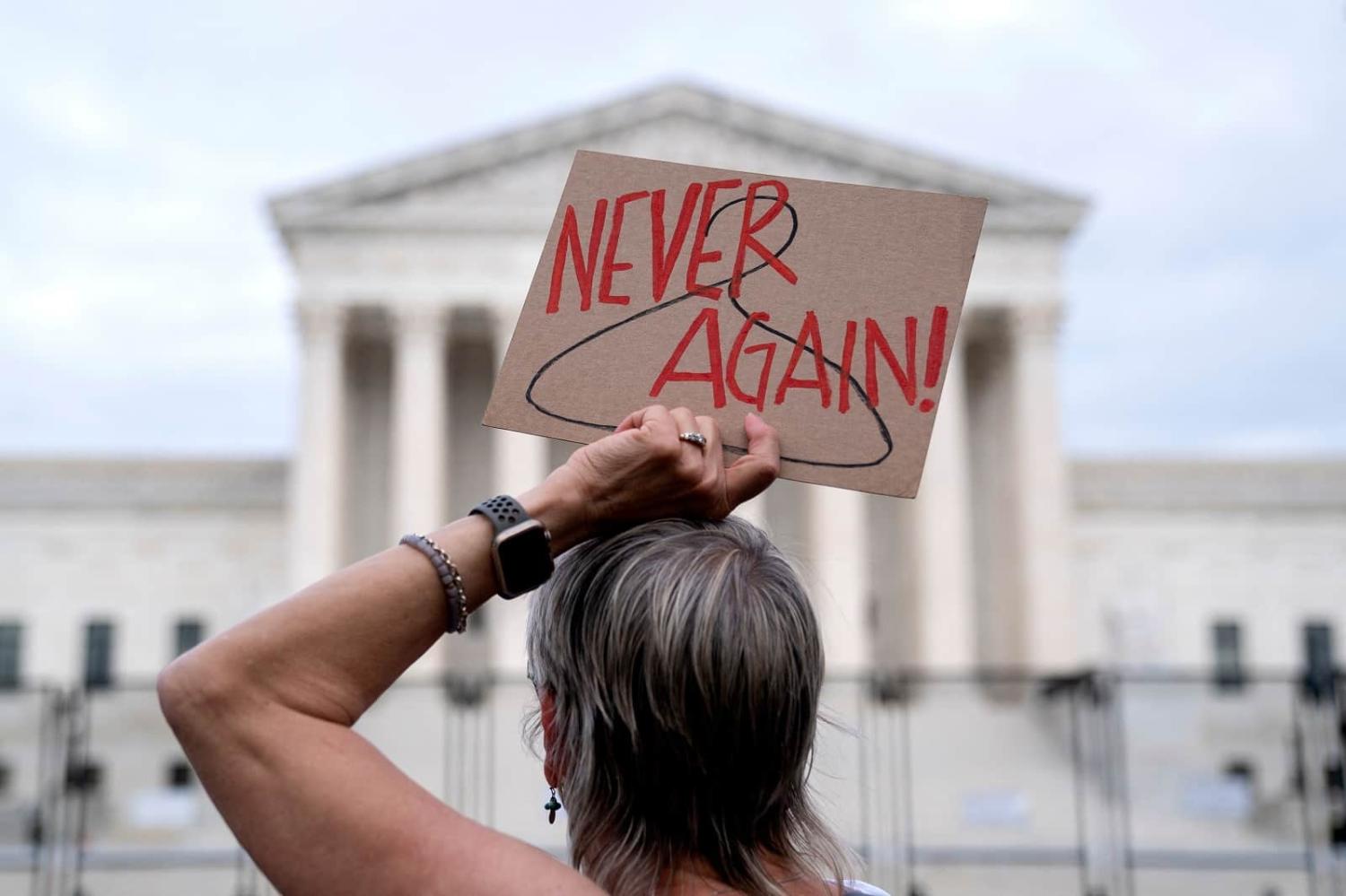 A pro-choice demonstrator outside the US Supreme Court in Washington, DC, on 11 May 2022 (Stefani Reynolds/AFP via Getty Images)
Published 2 Aug 2022

The US Supreme Court’s decision to overturn Roe vs Wade has unleashed a frenzy of misogynistic lawmaking, with abortion bans now enacted or soon to be enacted in more than half US states.

Abortion bans will compel women and girls to give birth against their will and irrespective of their life circumstances. Within this febrile legislative setting, Republican lawmakers have dismissed exceptions in cases of rape as a rationale for women to avoid accountability and have not shied away from condemning a doctor who provided medical abortion care to a ten-year-old girl who had been raped.

The Australian anti-abortion movement has looked to its US counterpart for support and strategic guidance since the 1970s and replicated its discourses and tactics.

In a nation with poor maternal healthcare outcomes, where Black women are at heightened risk of pregnancy-related complications and death, doctors have declined to provide lifesaving healthcare due to fear of prosecution under the bans now in place. Access to medical treatment for autoimmune disorders has been denied due to the potential for inducing miscarriage. Treatment for miscarriage and ectopic pregnancy has been delayed and women placed at risk of life-threatening complications, including sepsis and rupture of the fallopian tube. Doctors have warned that many women, particularly those who experience intersectional disadvantage, will die.

Australia may appear worlds away from the state-sanctioned violence spreading in the United States. Australia’s National Women’s Health Strategy 2020–30, devised at a bipartisan summit in 2018, counts equitable access to pregnancy termination services as one of its measures of success. Like the United States, the regulation of abortion has always been a matter dealt with primarily by the states. But Australian abortion law has charted a trajectory of liberalisation.

The Australian anti-abortion movement has looked to its US counterpart for support and strategic guidance since the 1970s and replicated its discourses and tactics. Debates around the decriminalisation of abortion in Australia have not been free of the misinformation and stigmatising narratives that are proliferating in America.

Days after laws decriminalising abortion took effect in South Australia, a representative of the anti-abortion group Enid Lyons List asserted that a number of parliamentarians had pledged to “take forward” legislation being drafted by the group only for the claim to be denied.

A growing religious right in Australia is positioning itself to capitalise on the emboldening of the anti-abortion movement following the US Supreme Court’s overturning of Roe vs Wade. The Australian Christian Lobby declared the court’s ruling a “tremendous victory in the fight to protect unborn lives!”, “just the beginning” and called for supporters to “get active” with a “new, young pro-life generation … rising up!”

What is unfolding in the United States and the type of measures that the anti-abortion movement in Australia would seek to import should be the focus of alarm. In a healthcare context in which violence has been used as a deliberate tactic to reduce and eliminate abortion access, the overturning of Roe vs Wade has seen an increase in assaults, barricades and suspicious packages outside abortion clinics, and escalating threats of violence towards providers of abortion care. The targeting of abortion providers has been incentivised by vigilante laws that now operate in five states, deputising individuals to seek financial gain by bringing legal proceedings against doctors and anyone else who helps a person obtain an abortion. Republican lawmakers in Tennessee have conceded that vigilante laws may allow for the perpetrators of rape, or their family and friends, to sue for damages if a resulting pregnancy is terminated and the assault is not reported to police.

The abortion bans now spreading throughout large swathes of the United States are not only a vehicle for violence perpetrated by the state, but make women vulnerable to gender-based violence.

Beyond deputising private citizens, the enforcement of post-Roe bans will see the heightened state surveillance and criminalisation of pregnant people, particularly those in communities that are already subject to high levels of policing. Miscarriages and stillbirths will raise suspicion and some will lead to criminal investigation and prosecution.

Abortion bans now in force demonstrate that US states are willing to exercise state-sanctioned violence to target, coerce and control significant segments of the population. The criminalisation of abortion and mistreatment of women and girls seeking reproductive healthcare have been recognised by international human rights bodies as a form of gender-based violence, sometimes described as reproductive violence, state structural violence and violence against reproductive freedom. Forced birth is a form of gender-based violence that constitutes cruel, inhuman and degrading treatment or torture.

The abortion bans now spreading throughout large swathes of the United States are not only a vehicle for violence perpetrated by the state, but make women vulnerable to gender-based violence, such as coercive control, at the hands of private actors. In erasing reproductive autonomy, the bans will render women unable to end abusive relationships, and endanger the lives and safety of women and their children. These laws empower the state, healthcare providers and individuals to exercise reproductive coercion and control the reproductive choices of others.

Under international law, states have an obligation to eliminate and end impunity for acts of gender-based violence perpetrated by the state and private actors. The obligation arises under human rights treaties such as the Convention against Torture and Other Cruel, Inhuman or Degrading Treatment and customary international law. But addressing gender-based violence is not a priority right now.

It’s a reminder of words attributed to third US President Thomas Jefferson that are apt to the challenge of maintaining hard-won reproductive rights: the price of freedom is eternal vigilance.

Progress of women in diplomacy a point of pride for DFAT

More women than ever are in key diplomatic positions for Australia.
Harriet Smith 30 Nov 2016 17:31