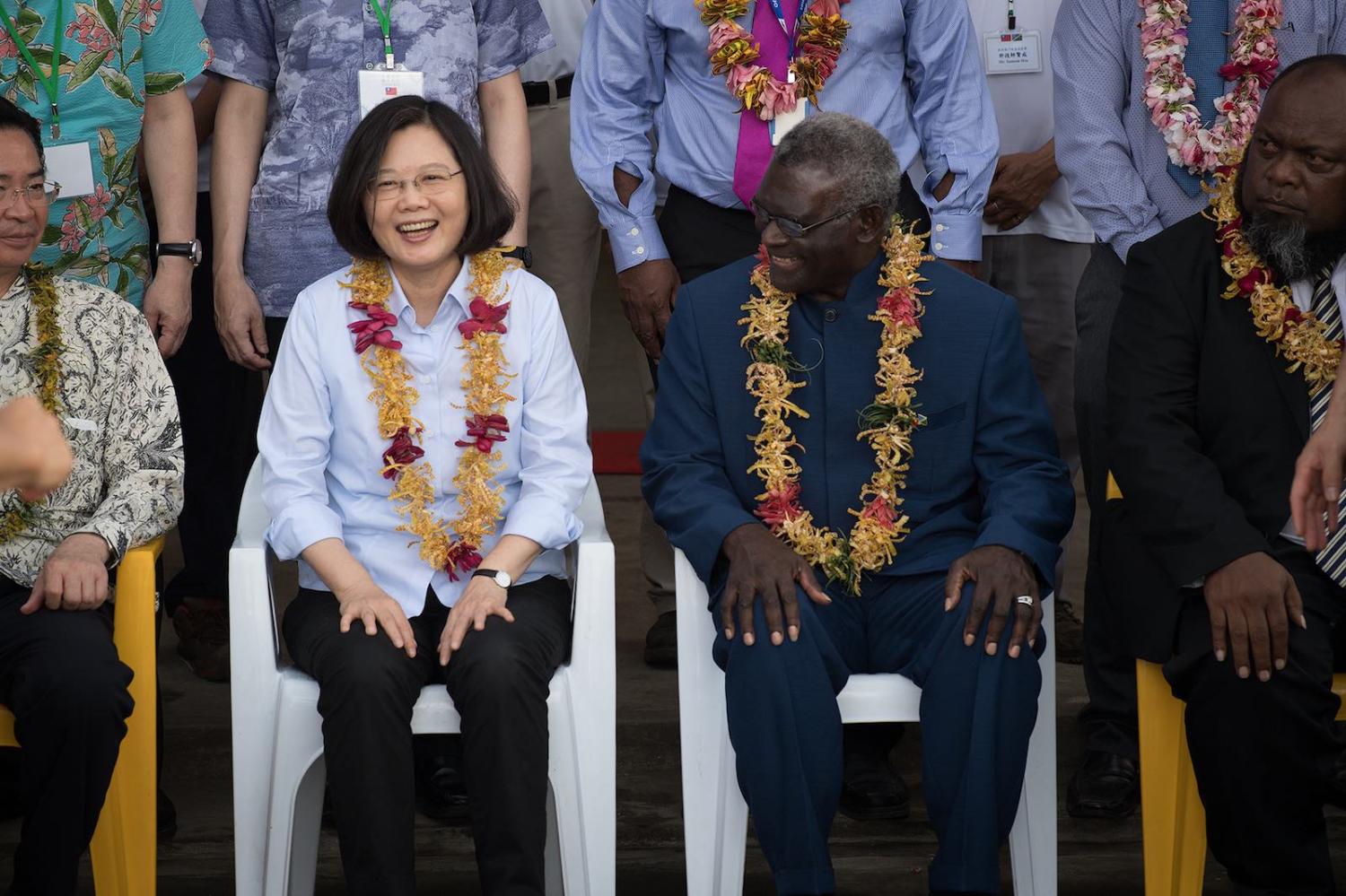 This article is based on the Little Red Podcast episode “Should I Stay or Should I Go Now? Inside the Solomons’ Big Switch.”

Taiwan’s relations with Solomon Islands started by chance, and now hang on chance. Within the next few weeks, the island nation will decide on whether to switch recognition from Taiwan to China, depending on the wishes of a few undecided MPs. Ashley Wickham, former head of Solomon Islands Broadcasting Corporation, explained why Solomons initially chose Taipei over Beijing. His story begins with a delegation from the Solomons visiting Beijing in 1983:

They were there to negotiate an agreement to put to Cabinet and then sign off. But everybody got quite angry about [China’s] rocket test into the Pacific. They were recalled, came back, and that was the end of it. We went with Taiwan.

These funds are notorious as a vote-buying scheme. Ruth Liloqula of Transparency International described a system where MPs use these funds to lock up votes:

In the last election some members of parliament did not campaign at all. They took their supporters to secluded places and campaigned there. Nobody else is allowed in. But they’re still winning.

It had been assumed Taiwan’s willingness to provide funds for this corrupt scheme would assure Solomons’ loyalty, but two things militate against this. The scheme has proved so popular among MPs that the Solomons government now contributes 80% of these funds, and Chinese officials have indicated they are willing to match Taiwan’s support for a “transition period”.

The geopolitical downside of staying with Taiwan was made clear by Solomon Islands Prime Minister Manasseh Sogavare:

When it comes to economics and politics, Taiwan is completely useless to us. I sent 40 police officers to go and train in Taiwan. That’s when RAMSI is already in this country. And you know what Australia did? The Foreign Affairs Minister himself went to Taiwan and says stop the training. That area is ours. And so they stop that. If this was China, they wouldn’t give a damn [about] Alexander Downer. They’d say get the hell out of here. This is a sovereign decision made by a sovereign government. And we can enter into military arrangements; get China to help us to establish a military force. You can’t do that with Taiwan.

The example set by PNG and Fiji in using China to leverage diplomatic partners – or as Sogavare puts it, “You behave yourself; I have another friend here” – has appeal on both sides of the debate. Despite his remarks, the Prime Minister is pro-Taiwan, and he couched Solomons’ historical loyalty to Taiwan in terms of shared values around democracy and human rights. He likened Taiwan to West Papua.

We can stand on the podium and make the United Nations look foolish. We talk about all these values and principles and whatever. But we don’t really believe in them. Just look at West Papua. It’s been around for 50 years. Their rights are basically suppressed because somebody’s economic interests must be protected. They’re very selective in exercising and implementing the values and principles that we believe they should as United Nations. And so I think there’s a very strong point for us [in staying with Taiwan].

Pro-China MPs in Solomons painted a less rosy picture of Taiwan’s democratic values. Some had experienced Taiwan’s meddling in local politics, particularly in fisheries. Others pointed to the dilapidated state of Taiwan’s flagship aid project, the National Referral Hospital, with one minister saying it was “Like a refugee camp, not a hospital. It’s a mockery to Taiwan.” There was a perception that Taiwan had been “playing hooky” and could do more.

The hypocrisy of the US threatening to punish small countries for adopting a diplomatic position identical to their own annoyed many. One interviewee recalled a recent Australian prime minister personally urging the Solomons to switch. How times have changed. If Honiara does stay with Taipei, it will be down to what Oliver Liao, Taiwan’s Deputy Head of Mission, described as “the democratic bloc”. The White House is on the phone to Honiara every week, urging against the switch and promising to reopen its embassy. Japan – and more quietly Australia, New Zealand, and France – are also in Taiwan’s corner.

If they are to match China’s infrastructure bid, they have a price tag to match. Several sources confirmed the regional manager of China Civil Engineering Construction Corporation (CCECC) directly pitched a US$500 million package of loans and grants to the prime minister, making clear what needed to be done before the company drafted an MOU.

A concern on all sides was the capacity of Solomon Islands institutions to manage the intensity of relations with China. As Pro-Vice Chancellor of Solomon Islands National University Jack Maebuta, who was working with CCECC on the company’s first major infrastructure project in Solomon Islands, explained:

Politically I don’t think [we are ready]. I think they cannot play with them. Instead of them playing on a level playing field, if the switch is going to happen, Solomon Islands Government will be on a silent mode, and China will run what they want to run with.

Previous Article
Not such a great game
Next Article
Will Israeli voters give Bibi a “get out of jail” card?

Australia's criticism of Beijing could be seen as an attack on Pacific nations themselves.
Rodger Shanahan 24 Jan 2017 16:25

I knew before coming to Sri Lanka on holidays that cricket was in season, but I never guessed that my sporting nirvana would be realised in South Asia.
The Interpreter 24 Dec 2021 09:00

As vaccines rolled out, hope that pandemic lockdowns would end proved short-lived as variants took hold.