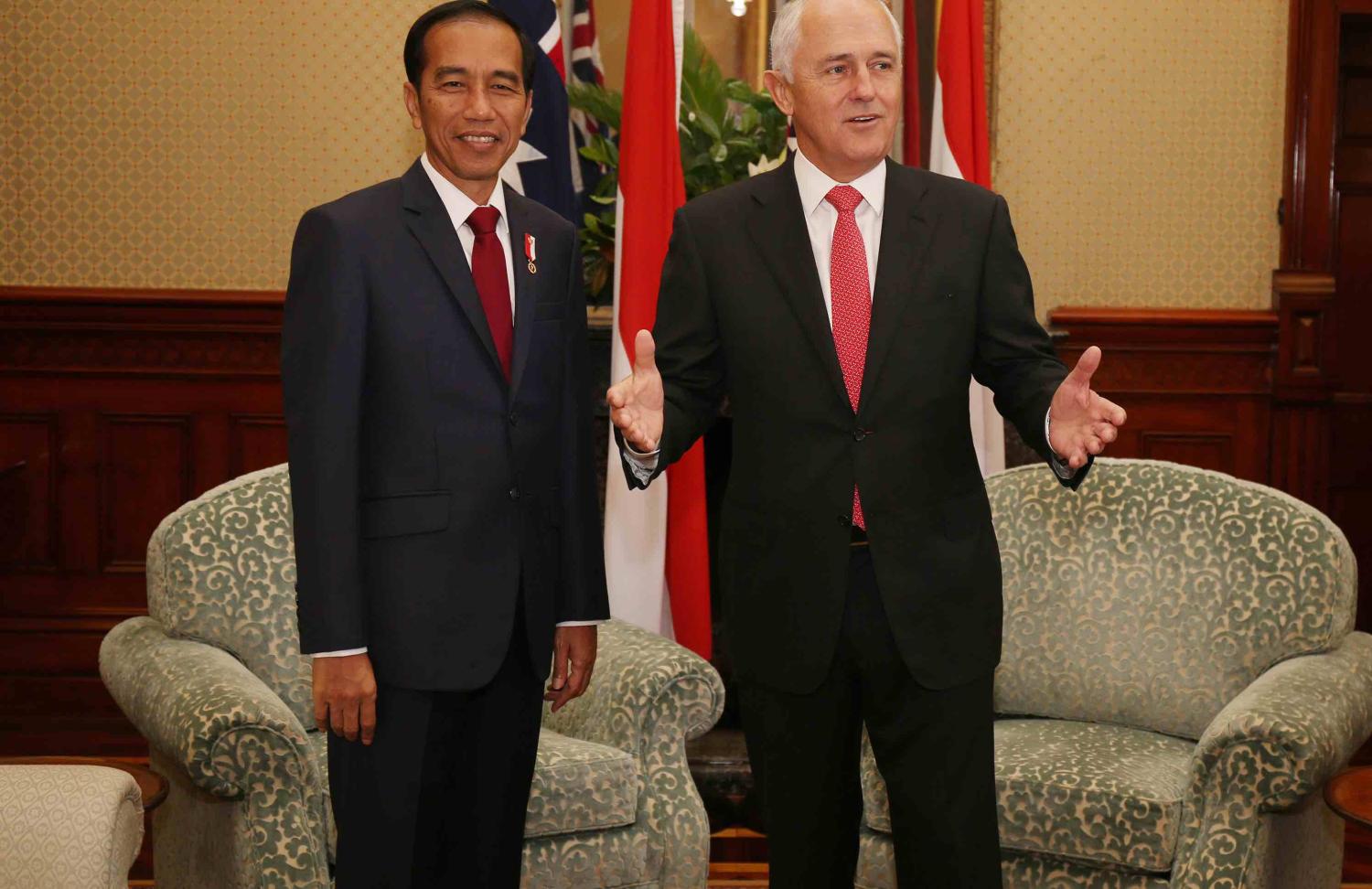 At the weekend, Prime Minister Malcolm Turnbull will meet with President of Indonesia Joko Widodo (Jokowi) on the margins of the Australia-ASEAN Special Summit. Although Turnbull seems to have built the positive personal relationship with Jokowi that eluded Tony Abbott, managing the bilateral relationship won’t be any easier for Turnbull than his predecessor.

The fate of the Indonesia-Australia Comprehensive Economic Partnership Agreement (IA-CEPA) illustrates the difficulties Turnbull faces. The signing of this agreement, under negotiation for almost a decade, was originally expected to provide the fresh “announceable” development that such meetings between leaders demand.

Although the signing may still happen, its likelihood has been descreasing for some months, all the more so as senior Indonesian ministers told the press on Tuesday that talks remain deadlocked.

Even if a deal is finally signed off, implementing it will be just as hard as its negotiation – maybe even more so. For all Jokowi’s repeated rhetoric of Indonesia being “open for business”, in reality his country remains strongly protectionist.

In part this is due to a tradition of populist mistrust of foreign capital, stoked by increased nationalism since the presidential elections of 2014. It is also partly because of a too-often corrupt and obstructionist bureaucracy, and a result of wealthy oligarchs’ capturing much of the political process and a good slice of the media too.

Jokowi’s promises count for little if these oligarchs choose to stymie deregulatory reform. The gap between his reformist policy announcements and the wicked problems foreign investors still face on the ground remains enormous.

Of course, the difficulty of developing bilateral economic ties cannot solely be attributed to Indonesia’s challenging business environment. Australia’s business underperformance in Indonesia is also a result of the persistent popular misunderstandings of the country that led Australians to ignore our shared geography and miss out on the benefits of Indonesia’s 5% growth and much-predicted boom.

This creates a vicious circle. As Dave McRae and Diane Zhang argue in their contribution to our newly published volume on Australia–Indonesia relations, Strangers Next Door?: Indonesia and Australia in the Asian Century, Australia’s shallow economic ties with Indonesia leave nothing to counterbalance popular security fears about Indonesia. The Indonesian diaspora in Australia is surprisingly tiny given their home country’s enormous size and close proximity.

Popular anxiety about Indonesia in Australia was also aggravated by the rise of racial and religious identity politics evident in the Jakarta gubernatorial election last year, which saw the Christian ethnic Chinese incumbent Ahok imprisoned for blasphemy.

In fact, Indonesian Islam’s growing social and moral conservativism could become even more problematic for our relations with Indonesia. Having finally managed to legalise same-sex marriage, Australians will react badly if the Indonesian legislature’s current plans to amend its Criminal Code to criminalise homosexuality are successful. This has the potential to trigger an international tide of criticism against Indonesia, which will probably only strengthen anti-foreigner sentiment.

Fear and anxiety works both ways. Australia’s popular reputation in Indonesia is also often poor. A persistent perception of Australia as firmly “white” feeds nationalist suspicions of its supposed neocolonial motivations in dealing with Indonesia.

Papua will therefore continue to be a major fault line in the relationship, sitting at the intersection of powerful and often conflicting ideas about human rights and national sovereignty in the two countries. Many Australian activists who lobbied for democracy in Indonesia and self-determination for East Timor now see Papuan independence as a similar cause, infuriating Indonesian leaders.

Indonesian suspicions about Australian ambitions also dovetail neatly with nationalist scepticism of Australia’s significance to Indonesia, given the latter’s economic and geopolitical “rise”. This is manifest in the frequent comments of Indonesian opinion-makers to Australians that, “You need us more than we need you,” or, as Indonesia rises, “You need to show us why you matter.” As then DFAT secretary Dennis Richardson wrote in 2012, a wealthier and more confident neighbour makes it “increasingly difficult for Australia to gain the attention of Indonesian decision-makers, to the extent that we think our interests might warrant”.

There are plenty of other human rights and criminal law issues on which Australians and Indonesians frequently do not see eye to eye, including the death penalty and drugs sentencing. Asylum-seeker policy is another obvious fault line.

Amid this turbulence, bilateral ties have grown incrementally broader and, in a range of respects, warmer, since Indonesia democratised in 1998. Turnbull’s regular meetings with Jokowi and the annual “2+2” defence and foreign ministers meeting, which will accompany the ASEAN summit this weekend, are each part of the wide range of government cooperation has developed. Nevertheless, the two-way tensions, fears, and misunderstandings signal that bilateral ties face a bumpy ride ahead.

In fact, there is a real risk that as the Asian Century rolls on, Australia and Indonesia may find themselves largely going their separate ways.

Preventing this from happening, and deriving some benefit for Australia from Indonesia’s fast-moving transformation, will be a huge challenge for Turnbull, regardless of his personal rapport with Joko Widodo. IA-CEPA would be a nice start, but don’t hold your breath.

Tim Lindsey and Dave McRae are the editors of Strangers Next Door?: Indonesia and Australia in the Asian Century, published by Hart Publishing in February.

Tobacco use is cruelling Indonesia’s potential, and anti-smoking education should be a priority for Australian aid.
John Blaxland 1 Mar 2017 16:53

Australia’s F-35s: The beginning of a 5th generation RAAF