B-52 bombers only part of a very long Australian story

A revamp of RAAF Tindal for the nuclear-capable aircraft creates opportunities well beyond military confidence building. 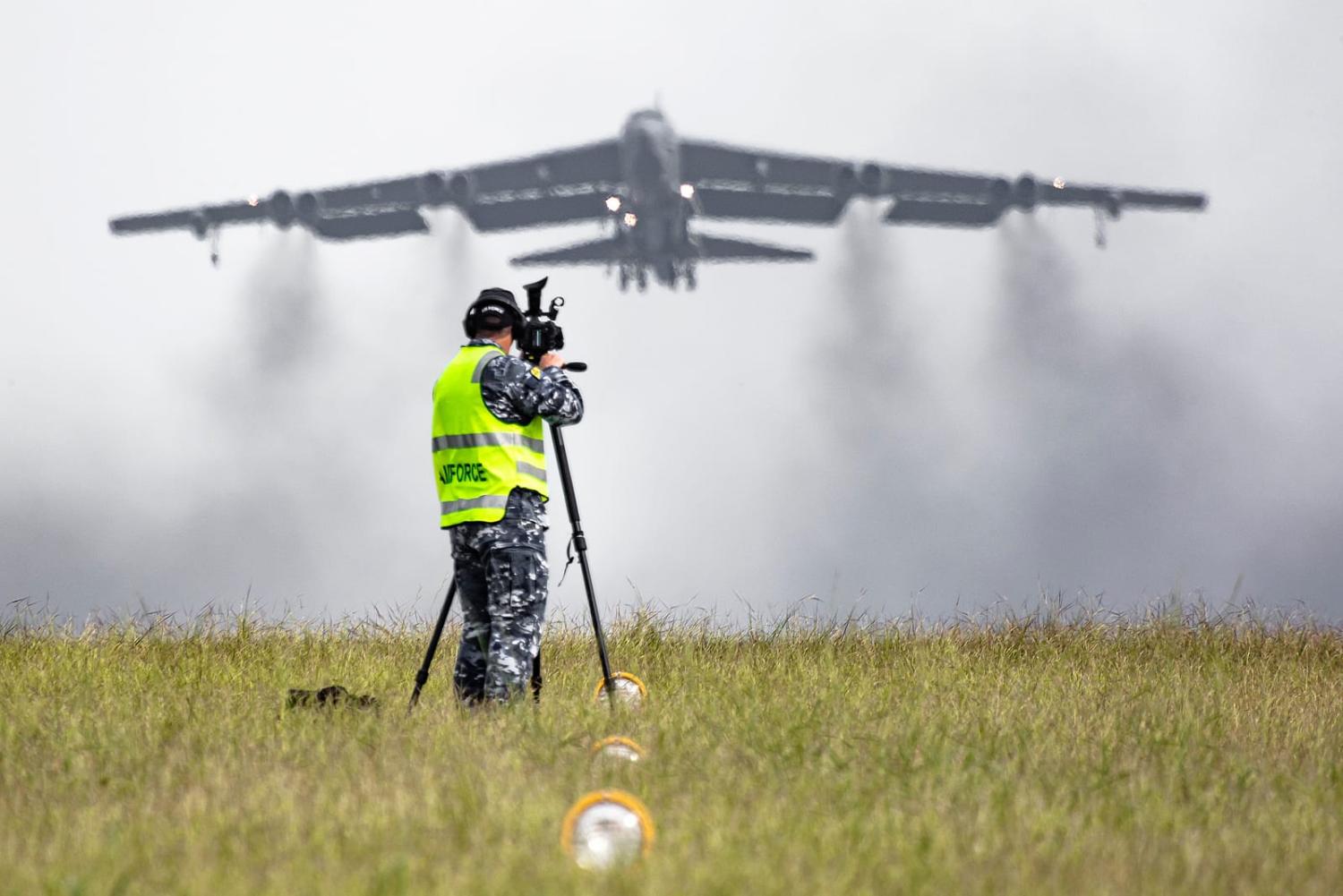 Onlookers should not be surprised to see growing numbers of nuclear-capable B-52 bomber aircraft in Australia’s airspace and territory. B-52s have been flying over the Northern Territory since the 1970s, visiting since the 1980s, training regularly since 2005, and are supported by recent initiatives including the Australia-United States Enhanced Air Cooperation agreement.

Nor is there any need to travel far in Darwin to find the museum housing B52 Stratofortress 92596 – “Darwin’s Pride” – which was a gift to local people from the US air base at Guam. The barrels inside its machine guns have been removed and the plaque inside the bomb bay reads “rest in peace” – a symbolic gesture to mark the end of the Cold War when this particular aircraft was retired.

But strategic circumstances in the modern era have changed. Australia has now welcomed plans for six bombers and American investment for RAAF Base Tindal in the Katherine region.

US bombers have been hosted by supportive states during peacetime for close to 75 years, with politics sometimes ricocheting around their presence. B-52s are regularly involved in training and interoperability exercises with allies and partners across Europe, the Middle East and the Asia-Pacific regions; recently, six B-52s flew over 30 NATO allies on the same day. And the American plans for Australia are in many ways a reflection of “business as usual” for the role of these aircraft to serve a deterrent function.

The message Australia must clarify is under what circumstances, if any, the nuclear-capable bombers would be nuclear-equipped.

It is perhaps understandable, given that these bombers have a nuclear capacity (which may not be present in Australia), and when paired with Australia’s AUKUS announcement about obtaining nuclear-powered submarines, to see the deployment as part of a regional arms race, but that would be more an instance of the “Baader-Meinof phenomenon”, in which something noticed for the first time then seems to appear everywhere.

The rotational presence of the B-52s in Australia instead fits with what has become an established and widely accepted narrative over recent years, to send a visible signal about a joint commitment by Australia with its US ally to deter any power’s desire to conduct military activities in the South China Sea and to enforce the global rules-based order to ensure peace and stability. As much as the Albanese government is rhetorically seeking to change its “tone” towards China, such an approach has only strengthened Australia’s defence posture by serving as a bridge until its own capabilities for future force come to fruition.

But it is important for the Australian government to be clear about the reason for hosting the B-52s and to assure its allies and partners, neighbours, and the Australian public. The B-52s are undoubtedly a potent weapon, able to cover all Australian territories and strike across the Indo-Pacific region. The message from Australia needs to address the different interests of regional states, not only US allies. Non-aligned countries, and Australia’s relations with Indonesia, China and others in the neighbourhood, are likely to be more sensitive now.

The key is to put an emphasis on joint plans for training and exercises that build solidarity and trust, and enhance regional interoperability. RAAF Tindal already hosts major training such as Exercise Pitch Black, which involves India, Japan, France, Germany, South Korea and Indonesia. The upgraded base has already facilitated different aircraft from these and other partners, and it is unlikely that future infrastructure would only be used to host B-52s. Rather, RAAF Tindal can and should play a role in reducing security concerns outside the realm of great power politics alone, and extend into areas such as humanitarian aid, and disaster relief operations, and in support of other military cooperation.

The message Australia must clarify is under what circumstances, if any, the nuclear-capable bombers would be nuclear-equipped, including what this entails. Australia’s neighbours  New Zealand and Pacific Islands countries share little nuclear enthusiasm and Australia would not want to strain those relationships further.

The reassurance is also local. History has demonstrated that despite Australia’s geographic isolation it can be reached. Hosting these planes at RAAF Tindal is intended to reduce the possibility of any conflict, even if raising the spectre of the security dilemma, making the north more prominent as a potential target. The B-52s are one part of a larger upgrade of defence infrastructure in Northern Australia and upgrades to the Pine Gap intelligence base. But for locals in the Northern Territory, these upgrades also address longstanding concerns about insecurities in the north. For the Top End, the experience hosting Marines over the past decade has increasingly put such anxieties to rest.

What is most important for Australia to emphasise is the other side of the debate, the regional contribution Australia is making for security. Australia should focus on the good that can come from the RAAF Tindal revamp in other domains of strategic importance, such as humanitarian aid, and disaster relief operations and military confidence-building. In that fashion, the hope to find peace will not be fraught.

Previous Article
Can the UK stop the boats?
Next Article
Australia must help turn back a regional democratic retreat

Olympics not the only games this year

Beijing boycotts are just the latest in a long line of sports and politics match plays.
James Curran 11 Aug 2017 11:58