The fraught relationship between the United States and China is set to deteriorate further. 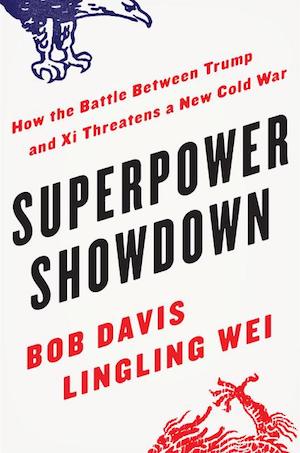 Global relations are undergoing a dramatic shift. China is increasingly assertive internationally and repressive domestically. Examples of its brashness abound, whether in its handling of maritime and border disputes, imposition of new security legislation on Hong Kong, oppression of ethnic Uighurs in Xinjiang, marketing of Huawei’s 5G technology, or sabre-rattling over Taiwan. Deng Xiaoping’s guidance for China to “hide its strength and bide its time” is long forgotten. Party chief Xi Jinping will not wait, and has entrusted the implementation of China’s get-tough approach to its “wolf warrior” diplomats.

The West’s patience with China is wearing thin. The United States has slapped tariffs on a range of Chinese products and accuses China of allowing the Covid-19 virus to spread around the world. The United Kingdom is frustrated with what it considers broken commitments over Hong Kong. Concerned about security and under pressure from the US, it has banned the Chinese telecom company Huawei from developing Britain’s 5G network. Other countries might follow suit. Australian demands for a review of the origins of Covid-19, again, have brought harsh retaliation from China.

Since the 1970s, a principal justification for Western economic cooperation with China has been the assumption that it would lead to economic reforms and political liberalisation. These did not materialise and the notion that the processes are linked is now all but dead. The West’s disengagement from China is gaining momentum.

Superpower Showdown, by Wall Street Journal reporters Bob Davis and Lingling Wei, analyses the emergence of this rift, from Bill Clinton’s administration to the present day. The authors focus on trade negotiations, which are at the heart of the relationship. However, in mapping out how the two parties have moved apart, they highlight the global significance of the chasm.

The Chinese had no idea who was in charge, and neither did Trump. On the Chinese side, Vice Premier Liu He had Xi’s full confidence, but only moderate political clout.

Davis and Wei remind us how poorly prepared the current US administration was to deal with China. To help out President-elect Donald Trump, in December 2016 Henry Kissinger flew to Beijing and got Xi to commit to visiting the US early in the incoming administration’s term. The same day, Trump took a phone call from Taiwan’s president, the first president-elect to speak with a Taiwanese leader since relations with China were normalised in 1979. In doing so, he unwittingly called into question Washington’s acceptance of “one China”, a cornerstone of the relationship. The blunder nearly scuttled Xi’s visit. Aides subsequently informed Trump of the sensitivity of the issue. His response? “I don’t give a shit”.

The authors compare US-China relations to a schoolyard brawl. Trump felt that China had been cheating the US for decades and needed to be smacked down. Xi, again, saw America as a bully and jealous of China’s ascent. It was time to show the bully that China would not back down. While both sides were looking for a quick fix, the conflict continued to escalate. The book helps us to understand their calculations and miscalculations.

Davis and Wei have done their homework. They describe in detail the internal debates within the US political system, and the differing views among China’s leaders. Despite external appearances, China is no monolith. The authors provide valuable insight into its internal workings, reflecting their broad networks and thorough research.

US-China trade negotiations failed in part simply because they were poorly organised. During the George W. Bush administration, the two countries met regularly under the Strategic Economic Dialogue, with the US team carefully coordinated by Treasury Secretary Henry Paulson. The Obama administration emulated this approach, while Trump rejected it, leaving Treasury Secretary Steven Mnuchin, Commerce Secretary Wilbur Ross, Trade Representative Robert Lighthizer and advisor Peter Navarro to thrash out their differences. The Chinese had no idea who was in charge, and neither did Trump. On the Chinese side, Vice Premier Liu He had Xi’s full confidence, but, having risen from the bureaucracy, only moderate political clout.

The real problems run much deeper. The authors detail disputes related to joint ventures, state subsidies, forced technology transfer, intellectual property and patent infringements. In 2018, in frustration with what he saw as political pressure from the US, Xi noted “In the West you have the notion that if somebody hits you on the left cheek, you turn the other cheek. In our culture, we punch back”. American negotiators gave up waiting for promised reforms, and tit-for-tat tariff increases followed. As a result, corporate investment and hiring slowed, impacting the two economies and global GDP.

A first phase trade agreement was signed in January 2020, but driven by the Covid-19 crisis and a slew of other problems, relations have subsequently tanked. In July, Secretary of State Mike Pompeo called for US allies to work together to contain China’s rise. Ultimately, Davis and Wei point out, the dispute is about China’s state-led system challenging the Western economic and political model.

Previous Article
COVIDcast: Looking at China from the grassroots, with Dexter Roberts
Next Article
Brunei, ASEAN and the South China Sea

Books for quarantine: Hugh White suggests, plus a time for classics

More reader responses to the call for books to collect for social isolation.
Crispin Rovere 4 Jul 2017 09:28

Allison methodically dismantles the idea that China will become a 'responsible stakeholder'. China seeks the expulsion of the US from Asia.
Ben Rich 6 Dec 2016 15:47

The volume provides an understanding of the inner structures guiding Riyadh’s decision making on the global stage.