By asking “What do Republicans stand for?” the president can bring his own domestic and foreign priorities into focus. 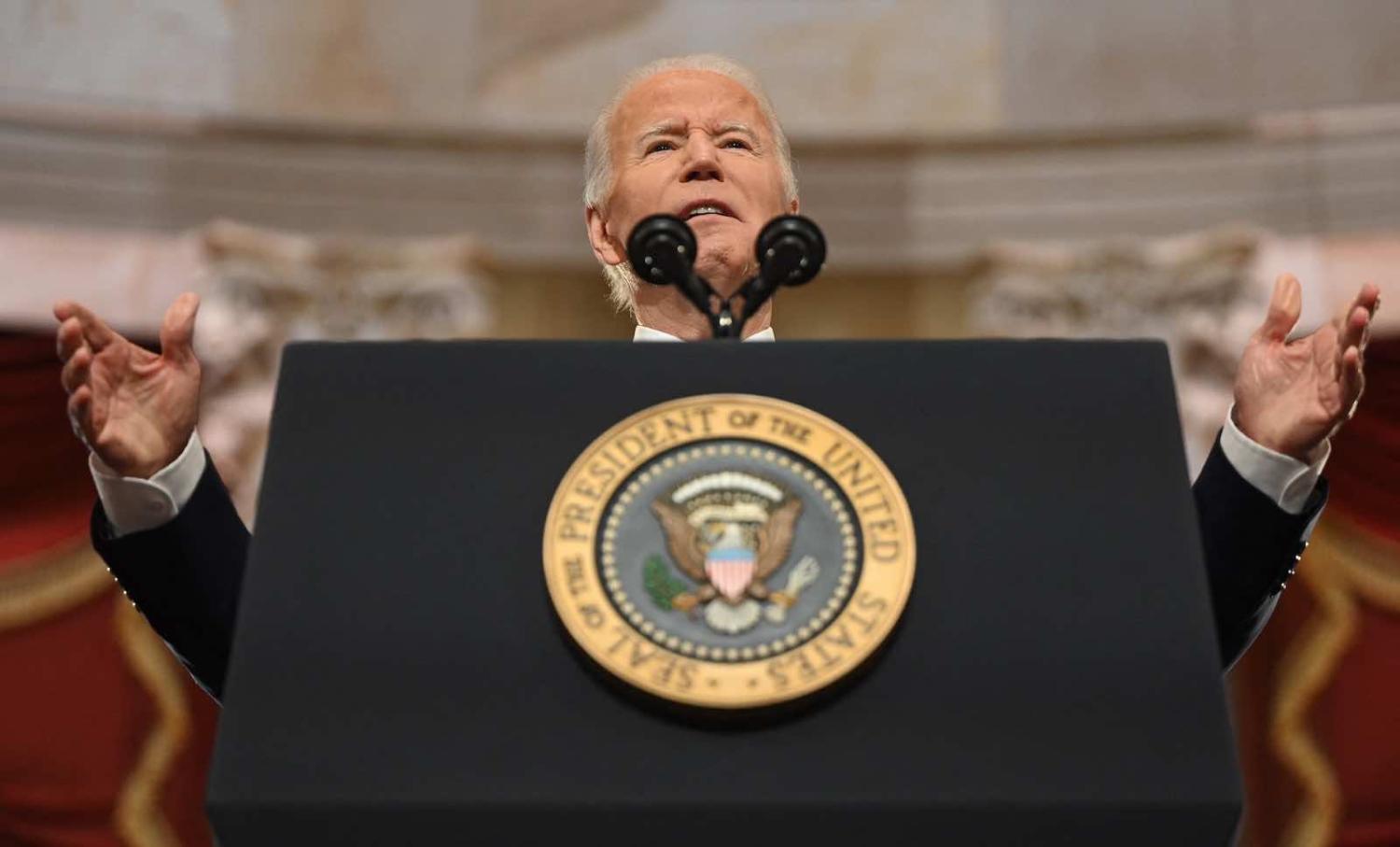 US President Joe Biden’s regrettable and somewhat rambling comments on the tense situation in Ukraine during a 19 January press conference understandably drew the attention of America’s allies and foreign policy analysts. But for those of us with the patience to listen to two hours of “pure, unplugged Joe Biden”, that press conference was also a great opportunity to gain some insight into how Biden views his first year, and what to expect from him moving forward in domestic and foreign policy.

Taken as a whole, what was most striking about the 19 January question and answer session was how upbeat Biden appeared. One reporter after another laid out the disappointments of Biden’s first year in office, focusing primarily on domestic policy: Biden’s major social spending program – Build Back Better – is stalled in Congress. Voting rights legislation was poised to fail in the Senate. Inflation is high. Covid continues. And the country is more polarised than ever. Had Biden overpromised? How would he course correct?

Most politicians in Biden’s position would be inclined to attempt a reframing of these disappointments, but it’s difficult to maintain that posture over two hours. Standing at the podium for 111 minutes, smiling and occasionally apologising for going on too long, Biden seemed to have fully embraced the poet Robert Browning’s sentiment that of course a man’s reach should exceed his grasp.

However, Biden’s behaviour reflected more than his ambition; he seemed certain that he had been largely successful in the first year.

There’s reason to hope that 2022 will bring increased bandwidth for the administration to focus on foreign policy.

I’ve written in these pages before about Biden’s domestic agenda representing a philosophical break with the limited government and neoliberal economic policies that have dominated White House thinking since the election of Ronald Reagan; a break that involves prioritising the concerns of working-class Americans who comprise two-thirds of the adult American population.

Despite Biden’s deep interest and experience in foreign policy, it was clear that this domestic priority, alongside the pandemic, was where Biden would invest the most of himself and his White House in the first year. Watching this news conference in mid-January 2022, separated from the noise of last year’s drumbeat of coverage on Democratic infighting and congressional obstruction, Biden’s claims about success in the context of his priorities rang at least partly true.

In 2021, the Biden administration significantly improved conditions for working-class Americans. The US$1.9 trillion “American Rescue Plan” lifted the wages and overall wealth of working-class people, a phenomenon that has been moving in the opposite direction for decades. Further, the bipartisan infrastructure bill that passed in September, and represents the biggest investment in America’s infrastructure since the 1960s, will produce half a million jobs in the construction, manufacturing, and service industries by 2024.

Because Biden was unable to garner support from Democratic Senators Joe Manchin and Kyrsten Sinema for passing a broader social spending bill via a process that required only Democratic votes, many of the gains made in 2021 in terms of wage growth and wealth are not secure.

However, all is not lost. The Build Back Better bill was way too big to garner any Republican support (and by extension Manchin and Sinema’s support). But if it’s broken apart and Republicans are engaged in rewriting, key pieces may win passage. For example, the child tax credit, piloted through one-year funding in the American Rescue Plan, demonstrated that it was possible to cut child poverty by 30 per cent in one year. Republican Senator Mitt Romney has proposed a similar bill, and a credible case can be made that his bill is a better long-term solution.

It was clear from Biden’s responses to reporters that, going into 2022, he understands that playing a visible role in negotiations over domestic policy is likely to be futile and counterproductive to his interests. Biden acknowledged that:

… one thing I haven’t been able to do so far is get my Republican friends to get in the game of making things better in this country … I did not anticipate that there’d be such a stalwart effort to make sure that the most important thing was that President Biden didn’t get anything done. Think about this: What are Republicans for? What are they for? Name me one thing they’re for.

Reporters questioned how the president could have been surprised by Republican intransigence and congressional obstruction given his experience as Barack Obama’s vice president, but it’s clear Biden felt like he had to try, although he’s done trying for now. Biden spoke about getting out of the White House more often to take his case to the American people and spending time campaigning for Democrats running for re-election this year, most likely repeating some version of “What do Republicans stand for?”

With inflation higher than it’s been in 40 years, the politics associated with the 2022 midterms heavily favour the Republicans retaking the House and Senate. This is true despite low unemployment and high levels of economic growth: Americans feel that the economy is still not quite working.

Biden’s betting that inflation declines over the course of the next couple of years as the coronavirus shifts from pandemic to endemic, but whether it does or not, the administration has reached a point where there aren’t a lot of levers left to pull to influence this outcome. Vaccines are widely available to all Americans aged five years and up, and a Pfizer vaccine for children over six months but under five is likely to be approved soon. After some delays, the administration can now guarantee the supply of rapid antigen tests, which help keep schools and workplaces open.

There’s reason to hope that 2022 will bring increased bandwidth for the administration to focus on foreign policy. This is much needed work. Emma Ashford’s recent commentary in Foreign Affairs highlights that while Biden maintains the capacity to be a consequential international leader, his foreign policy has been unclear on key issues, i.e., is American global leadership back or is America focused internally? Are American strategists making big changes to adapt to a new world or is America simply trying to go back to a pre-Trump era?

Biden can point to AUKUS and to the extension of the arms control agreement with Russia as objective foreign policy wins, and to the Afghanistan withdrawal as a promise kept though poorly executed. That, and the Global Posture Review released by the Defence Department in late 2021 disappointed many for failing to link America’s global footprint to a rebalance to the Indo-Pacific, and the Trump-era tariffs that have been kept in place suggest a stay-the-course approach that doesn’t meet the moment.

However, there are built-in opportunities to address these core questions with the planned release of the Biden administration’s National Security Strategy and National Defence Strategy in 2022. Ideally, these documents deliver a greater level of coherence and enable the Biden team to answer, in the realm of foreign policy, what they stand for.

The vague North Korea policy from the White House has left all parties unsure what the United States hopes to achieve.
Aristyo Rizka Darmawan 16 Feb 2022 11:30

Rather than trying to push ASEAN to confront China, the White House has made an important gesture for unity.
William Gourlay 30 Apr 2021 10:00

In acknowledging the Armenian genocide, the US president has created waves with a long-standing ally.