Reshaping policies on the Pacific, Indonesia and domestic manufacturing is already revealing a changing of the guard. 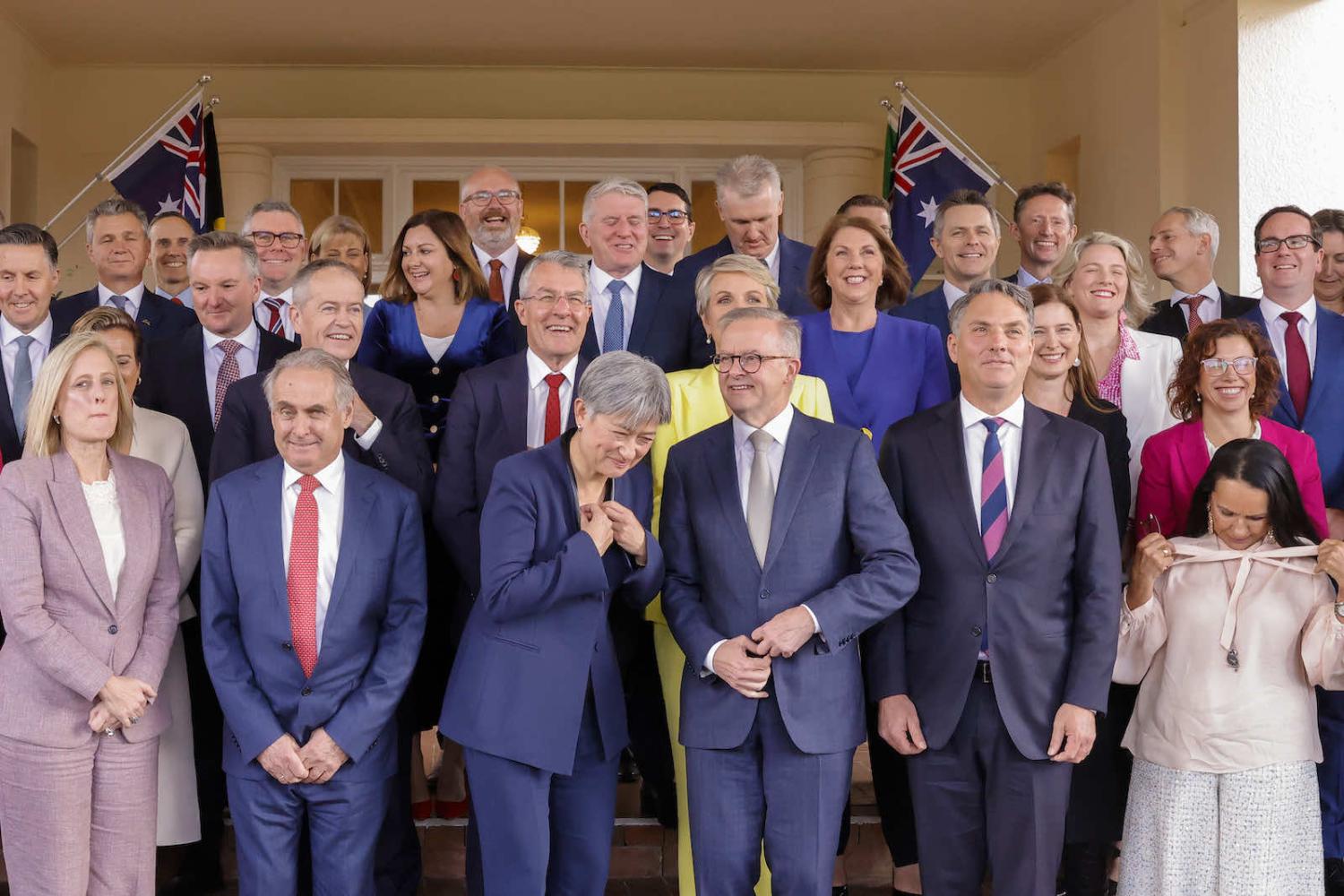 Last month, as Australia’s election got underway, that economic security minister, Kobayashi Takayuki, finally got a law in Japan to strengthen supply chains for key materials, give the government more control over infrastructure, and encourage public/private cooperation on research and technology. Curiously, virtually only the Japan Communist Party argued the government was exerting too much control over private business.

So as a new government takes power in Australia, the country Japan Inc has increasingly turned to for profitable private investments and geo-economic cooperation in recent years, the question arises as to who Kobayashi should call?

Prime Minister Anthony Albanese appointed a new ministerial team this week which contains a better than usual mix of people with previous government experience and diversity. It seems to bode well for a steady start to Albanese’s plan to be in government for at least an orderly two terms, something the Labor Party has rarely done at the national level.

But one area where questions arise is just who will make the running on the issue that Kishida addressed with a minister, the US Treasury Secretary Janet Yellen is calling “friendshoring”, and outgoing Australian government used to call “economic sovereignty”?

There is a bigger question about who will really take up the policy baton on broader international commercial relations in an Australian Labor Party with a union base inclined to protectionism but a proud past government heritage of trade liberalisation – all amid debate over the merits of globalisation.

Trade reform in past Labor governments was often associated with ministers who were not restrained by a long union background such as John Dawkins in the Hawke government and Craig Emerson in the Rudd/Gillard governments. The use of structural adjustment measures to manage industry transformation amid unilateral and multilateral trade barrier reductions is still a standout achievement of the Hawke government, which Albanese regards as his model for success.

Chalmers also says he plans to go to the next Group of Twenty finance ministers meeting in Jakarta in July, suggesting that Australia is supporting Indonesia in the debate about whether Russia should be able to join the G20 year activities hosted by Indonesia.

Albanese has repeatedly said he wants to run a country that does more manufacturing. And his campaign gave much more attention to reshoring production than diversifying exports encapsulated by the campaign launch where he declared: “Are we going to strengthen our skills and training and manufacturing capacity to ensure we’re not left isolated at the end of global supply chains?”

The relatively prestigious Trade Minister’s job has gone to the powerful Labor right wing faction chief and former retail workers union official Don Farrell, who served for a short time in tourism, science and sports roles in the last Labor government in 2007–13.

Deputy Prime Minister and Defence Minister Richard Marles, also a former union official, should be across this as a former employment, skills and national reconstruction spokesman, but he will undoubtedly be busy building a nuclear submarine, among other things.

Treasurer Jim Chalmers likewise will have his hands full dealing with immediate domestic challenges over the budget, inflation and whether to restrict exports of gas to restrain domestic prices and help domestic manufacturers. That decision has interesting economic diplomacy implications for Australia’s reliability as a resource exporter and for its climate change credentials as it tries to balance declining investment in fossil fuel amid the potential “greenflation” from the rising cost of investment in alternatives.

Farrell has a deputy minister in Tim Ayers, who is also usefully deputy manufacturing minister. But Ayers is relatively new to parliament and has a background in the manufacturing workers union. And that led him, in his first speech to parliament, to echo the sort of sentiment heard from within the Biden administration that a decline in manufacturing jobs in Australia was associated with declining trust in democracy. In his first comment on the task ahead this week, Ayers told the ABC “rebuilding Australian manufacturing, making sure that we make things again in Australia, improve our economic diversity and resilience, is a core objective of the government.”

But the minister who has most interesting potential for grappling with the dilemma of maintaining a resilient sovereign manufacturing capacity, in a country that is highly dependent on access to globalised export markets, is the new Industry Minister Ed Husic, who also happens to be part of the new diversity as a Muslim. Husic too is a former union official but, more intriguingly for the purpose of managing a changing digital economy, from the communications division of the electrical union. And he firmly embraced the Hawke record in his 2010 first speech to parliament, declaring:

I recall the economic reforms in years gone by, such as the massive trade liberalisation we undertook 20 years ago. We never waited for trade doors to be opened elsewhere before doing what was right for this country. We made the right call: we set up the Cairns Group, we pushed for APEC and we prosecuted the cause elsewhere. Australia and the world are now better for this.

In his first interview this week, Husic emphasised the role of the government’s planned National Reconstruction Fund in providing cheap capital to supply chain sensitive businesses like the existing Clean Energy Finance Corporation does for renewable energy.

We do need to reconsider what our national manufacturing capability is across sectors and how we replenish and rebuild … there are areas where we can make a difference, resources, agriculture and particularly medical … not just in terms of having export opportunity but being able to meet the needs of businesses here.

So, watch this space if an Albanese government is going to pay more than lip service to its Hawke era aspirations.

Foreign minister Penny Wong has grabbed all the attention in managing Australia’s complex mix of defence, diplomatic and development challenges in the Pacific with her trips to Fiji, Samoa and Tonga so far.

But as Wong’s colleague in charge of Treasury Jim Chalmers talks up a budget hole left behind by the outgoing government, attention will eventually have to return to one of the key dilemmas of making scarce fiscal resources go further in the face of China’s Belt and Road Initiative.

Labor’s commitment to about $1 billion more in cash foreign aid to the Pacific, Southeast Asia and possibly further afield in developing Asia over four years was the big headline campaign item. But the non-cash aid focus in Labor’s aid policy may ultimately be more important. The plan to issue 3000 permanent resident work visas to Pacific citizens could be the first step towards some form of compact with some Pacific countries that was canvassed in the recent report from the Parliament’s Joint Standing Committee on Foreign Affairs, Trade and Defence.

But the aid policy outlined by the new Minister for International Development and the Pacific Pat Conroy, who usefully for strategic coordination purposes still has the Defence Industry Minister role, also placed a big emphasis on “new forms of development finance to complement Australia’s [overseas development assistance].” Conroy plans a Department of Foreign Affairs and Trade review of new options in the areas of lending guarantees, equity stakes and insurance which the last government was already embracing aggressively with initiatives such as backing Telstra’s purchase of Digicel Pacific.

“These are seen as having the potential to boost the effectiveness of grant funding by leveraging investment in development from the private sector, financial institutions and multilateral institutions. Australia must help shape these opportunities,” Conroy said. And Labor has already steamed ahead down this path by slipping its Pacific Climate Infrastructure Financing Partnership into the Australian Infrastructure Financing Partnership for the Pacific, which the outgoing government topped up with and extra $1.5 billion in March.

As Anthony Albanese and Penny Wong travel to Indonesia on the weekend for what has become a rite of passage first visit for incoming Australian prime ministers, Chalmers seems to have already elevated the country’s standing in the new government.

He made his first overseas phone call to his Indonesian counterpart Sri Mulyani Indrawati this week, partly making up for the fact that Albanese has already breached he first visit practice by going to the Quad Summit in Japan in the opening days of his prime ministership.

But more significantly Chalmers also says he plans to go to the next Group of Twenty finance ministers meeting in Jakarta in July, suggesting that Australia is supporting Indonesia in the debate about whether Russia should be able to join the G20 year activities hosted by Indonesia.

US, Canadian and some European finance ministers walked out of the finance ministers meeting hosted by Sri Mulyani in Washington in April and Australian officials participating remotely turned off their screens when a Russian spoke. Former prime minister Scott Morrison had said it would be difficult to attend the G20 if Vladimir Putin was there.

So this could be the first sign of a different approach by the Albanese government to the United States where regional and global interests diverge.

Previous Article
Knowledge is power: A small investment for a big return
Next Article
Labor should create a “Regional Carbon Bank” for ASEAN and the Pacific

Resolving some of the South China Sea’s longest running issues needs a policy toolkit that is customised and diverse.
Greg Earl 25 Mar 2021 15:00

Not-so-negative globalism, the not-so-predictable future of supply chains, and maybe not much change on China.
Robert Ayson 30 Nov 2021 10:30

Wellington has appeared slow to respond to a crisis in Solomon Islands where once it would have been a regional leader.