The language of geopolitics is trickling down to unexpected corners of the economy with wide-ranging long-term impact. 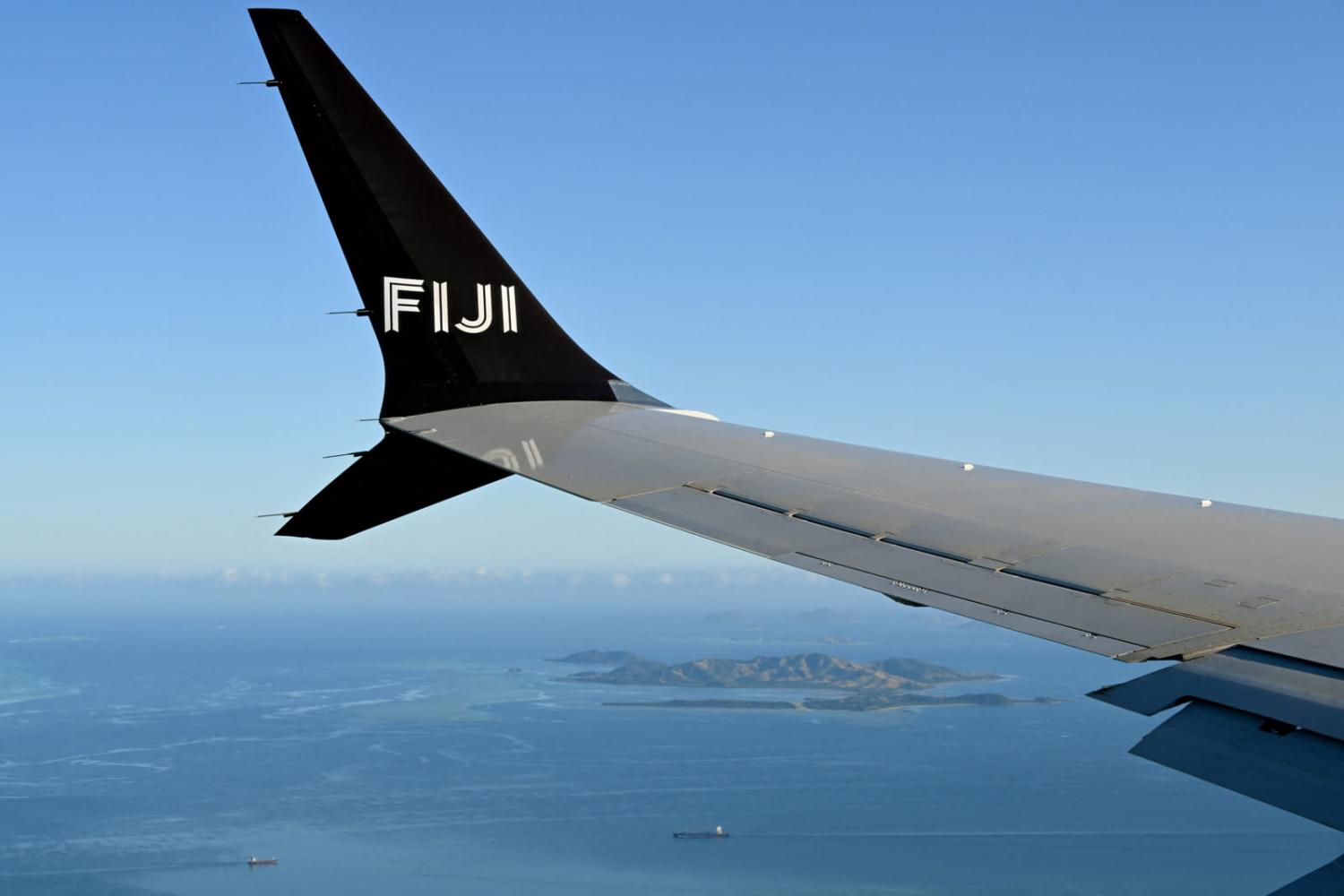 Pacific relations may have been an expected conflict zone at the last federal election but once in office the new Albanese government has doubled down on a big decision of its predecessor.

Amid the backslapping at this month’s Pacific Islands Forum (see the summary by Jessica Collins here), the government finalised its US$1.33 billion support for Telstra’s purchase of Digicel Pacific which sets a new benchmark for a Team Australia approach to economic diplomacy.

And Trade Minister Don Farrell joined the former government in telling business to lift its role in the Pacific Step-up:

This transaction sends a positive signal of business confidence in the Pacific region, and we hope it will encourage further investment in the region from top tier Australian companies.

That’s quite a tall order. Australian banks are pulling back for a range of reasons. Old Australian family businesses in the Pacific are disappearing and often replaced by better connected Malaysian entrepreneurs. Mainland Chinese investment ranges from strategically driven state-owned enterprises to organic corner store operators.

And then there’s the rather generous benchmark for government support embedded in the Telstra deal which other Australian businesses couldn’t be blamed for seeking when they look at Labor government priorities such as the promised climate change infrastructure which will be conveniently funded via the Morrison government’s existing Australian Infrastructure Finance Facility for the Pacific (AIFFP).

As noted here previously Australian investment in the Pacific has stood up quite well during the pandemic compared with other Asian countries, although the situation is not so favourable from a longer term perspective, especially during Fiji’s democracy upheaval.

But there are some positive signs. Amid the warnings from the International Monetary Fund this week of a global recession, the Asian Development Bank has just upgraded its Pacific economic growth outlook from 3.9 per cent to 4.7 per cent largely on the back of a stronger than expected Fiji tourism rebound.

And with good timing Fiji has just been doing its first overseas promotion since the pandemic with officials visiting Australia to promote some interesting economic diversification policies to overcome tourism dependence. They include business process outsourcing, small manufacturing, food processing and healthcare on the back of a more streamlined foreign investment and tax system.

As Reserve Bank of Fiji deputy governor Esala Masitabua explains the country’s development dilemma: “There was only one way to recover (from Covid) and that was tourism and then we can afford the luxury of diversification.” And Invest Fiji chief executive Kamal Chetty told an Australian Fiji Business Forum last week that Australian investment interest remained positive during the Covid shutdown with 33 projects valued at $26 million last year mainly in tourism and services.

That’s a long way from the sort of capital investment needed to pull the region back from the dislocation and poverty caused by the 6 per cent contraction in 2020. But it is a glimmer of hope when Farrell is trying to fashion a business dimension to the government’s much hyped Pacific reset.

The Chinese government’s “Made in China 2025” strategy is better known for sparking fears of global technology bifurcation. But it also contains some practical advice for Chinese offshore investors to “integrate into local culture” and “improve their overseas localisation capabilities”.

How much can Australia’s role as the Pacific’s main development aid donor be offset by a more genuine commercial relationship?

The fact this does not appear to be working so well in places like Papua New Guinea was one of the intriguing insights into the business environment in the Pacific for Australian companies revealed at a University of Sydney Business School workshop on the sidelines of the Fiji forum.*

The workshop was essentially looking at the benchmark for success which Farrell has in effect set: how much can Australia’s role as the Pacific’s main development aid donor be offset by a more genuine commercial relationship? This would involve both Australian investment on the ground and more integration into the Australian economy via, for example, labour movement and remittances.

And the obvious corollary to this is how much some cooperation on aid with China might make it more possible for Australian and Chinese business to develop a more positive relationship in the region. And where might well established other commercial players such as French companies fit into this?

The Albanese government has been non-committal on aid cooperation given the broader debate about Chinese “debt trap diplomacy”, but there appears to be interest in China for building on a joint malaria project in PNG.

But research showing that Chinese companies are struggling to adjust to understanding the operating environment in place such as PNG due to not having sufficiently skilled expatriate or on the other hand trusted local staff suggest that the apparent flood of Chinese money into the region may not such a big obstacle for Australian companies.

While the numbers are vague, it was suggested that real Chinese private investment was in the US$2–3 billion ballpark, which is less than the often-conflated value of floated proposals and official Belt and Road Initiative government directed quasi-aid projects.

So what should Australia do?

There was a common theme that unreliable or inadequate infrastructure in core areas like electricity was the key factor holding back foreign investment in the Pacific in areas such as the food manufacturing being promoted in Fiji’s new diversification plans.  This places a real premium on how Australia allocates the AIFFP money.

It takes 29 pages before a solitary reference to geopolitics can be found in Australia’s 2013 National Security Strategy. And then it is an anodyne observation that rising China’s relations with the United States will “necessarily feature prominently in any consideration of contemporary geopolitics”.

In the new era of economic security, the language of geopolitical risk, national security and deglobalisation has become the boilerplate material for many politician’s speeches. But what is more striking is how it is also moving down the food chain of government agency thinking.

Last year Australia’s sovereign wealth fund made a distinctive deviation into this world declaring that “countries have reasserted national interest, controls over national laws, and domestic focus in preference to the open international system” which would require a new approach to managing money.

And in the past few weeks there have been three equally striking worldview expansions to take account of a changing international order by quite different research, regulatory and oversight agencies underlining how embedded geopolitical thinking now is.

This week the national science agency CSIRO released a ten yearly outlook on megatrends which includes “Geopolitical shifts” along with six other such changes such as “Diving into digital” and “Unlocking the human dimension”. “Geopolitics” didn’t get a mention ten years ago.

Now CSIRO argues the Ukraine war and Asia-Pacific tensions have prompted “record-level defence spending, in Australia and globally, and increasing collaboration and cooperation across matters of security, technology and defence capability.” It highlights, for example, how global collaboration on scientific papers is under pressure and artificial intelligence or autonomous systems may “decrease the usefulness of certain defence equipment and strategies”.

The CSIRO uses the outlook to determine how to allocate its research funding and it points out that the uncertain new world of “geopolitical shifts” contrasts with a world view in 2012, which emphasised “a period of rapid economic growth and urbanisation across Asia and the new demands of the growing middle-class population”.

Meanwhile the markets regulator the Australia Securities and Investments Commission recently issued a new guidance note for companies preparing their accounts for the financial year which ended on June 30. It told directors and managers they needed to take into account a series of “changing circumstances, uncertainties and risks” including pandemic purchasing trends, availability of skilled staff and rising oil prices. But there for the first time was “geopolitical risks, including the Ukraine/Russia conflict”.

And in a quite different part of the bureaucracy, the New South Wales state auditor-general Margaret Crawford has issued a report pointing out that the exposure of NSW universities to students from China has continued to rise over the past two years despite a general drop in overseas students and rising bilateral tensions with China.

Noting that three countries – China, India and Nepal – now pose a concentration risk for the State’s universities, she warned:

Unexpected shifts in demand arising from changes in the geo-political or geo-economic landscape, or from restrictions over visas or travel can impact revenues, operating results and cash flows.

International relations theory can often appear quite rarefied. But when it filters down to the depths of the bureaucracy it can have quite a long-term embedded impact.

* Greg Earl was a participant in the University of Sydney Pacific business workshop.

Previous Article
Australia-China relations: Understanding how we arrived at this point
Next Article
If you had 30 minutes with the PM, what would you ask?

From used-car markets to giant infrastructure projects, Asia’s leading powers see more than a continent in need of aid.
Evan A Laksmana 25 Apr 2022 06:00

Resolving some of the South China Sea’s longest running issues needs a policy toolkit that is customised and diverse.