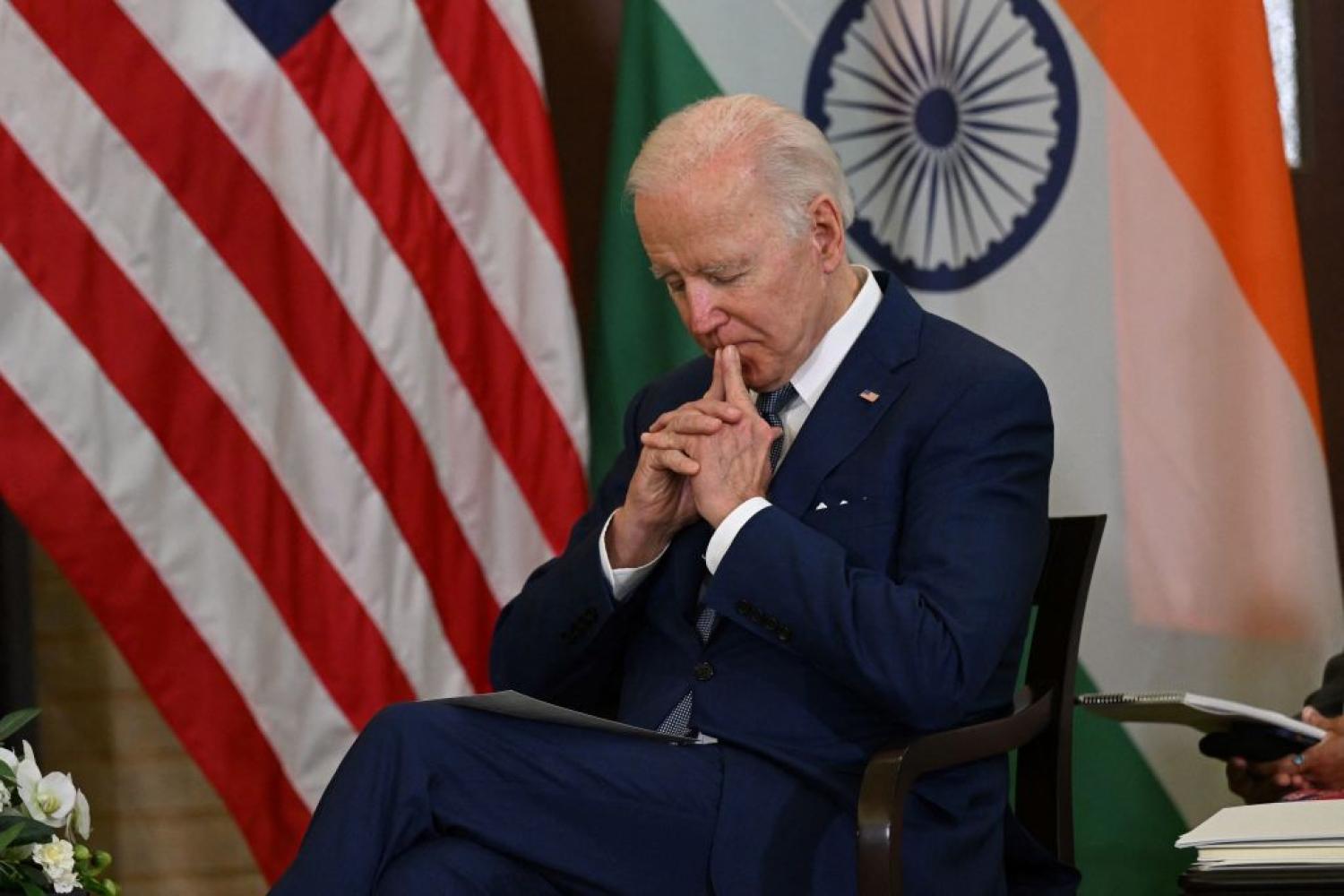 A new horse in the regional race

It is hard to begrudge an ageing father opting for his daughter’s wedding over a leaders’ summit which has lost its early lustre. But Joe Biden’s decision not to attend the Asia Pacific Economic Cooperation (APEC) group meeting in Bangkok on November 19 raises some questions.

When the Biden administration makes such a big deal about talking to partners unlike its predecessor, it is a curious decision for the president not to attend a summit where the United States will takeover as the group’s chair country for 2023. This can only raise new doubts about the value of such meetings in a divided geo-political environment where the United States is trying to fashion non-China alternatives. Will China’s President Xi Jinping attend a Biden hosted APEC next year?

APEC was once the shining light on the Asian diplomatic calendar for bringing together 21 diverse leaders from around the Pacific rim under a more cooperative rubric of economic cooperation rather than trade negotiation. Geopolitical matters could be discussed on the sidelines. China accepted Taiwan in as an economy rather than country. And Australian leaders could conveniently claim parental rights.

Then the East Asia Summit emerged as the powerhouse meeting. Then the region started fragmenting into smaller plurilateral groups from the Trans-Pacific Partnership (TPP) to the Shanghai Cooperation Organisation, to the Quad. The last four APEC summits – in Papua New Guinea, Chile, Malaysia and New Zealand – have been unsettled by diplomatic tension, civil turmoil or the pandemic. Now the United States is trying to set up a new forum in the Indo-Pacific Economic Framework (IPEF), which looks like a modern version of the old APEC but just without China.

Indeed, former United States trade negotiator Wendy Cutler was in Australia recently expressing pessimism about the future of global trade cooperation but talking up IPEF as a good thing because it looked just like APEC. Thai APEC officials have been plugging away this year on an in-person summit that would focus on useful things such as green issues, protecting tourism from future pandemic-style risks and reviving the grand ambition of a Free Trade Area of the Asia Pacific (FTAAP) fashioned from all the other initiatives.

But IPEF is clearly the glittering new thing. Singapore’s ambassador in Washington Ashok Mirpuri told a recent Center for Strategic and International Studies Asian architecture conference that some Asian countries had warmed to the IPEF after ironically being discouraged by the higher standards in the original US-backed TPP. “It seems the demand is there to do something in the region and something that is led by the United States,” he said. And the top American APEC official Matthew Murray said: “We are going to see a lot of things going in the same direction, same objective, but with different mechanisms and different partners.”

This all sounds fine. Except it is 30 years since Bill Clinton held the first then ambitious APEC leaders’ summit (which former Prime Minister Paul Keating says was at his suggestion). Now Clinton’s  political successor has a new horse running and is not even attending the race.

But like a good Singapore diplomat, Mirpuri can back all horses. (It is revealing that this week Singapore inked 19 new economic cooperation agreements with China after merely one with Australia three weeks ago during Prime Minister Lee Hsien Loong’s visit). So, Mirpuri admits that there can be no FTAAP without China and the United States talking to each other. “Politics has intruded more this (APEC) year than in previous years, so we really have to look at that into the future,” he says.

The contours of a new Australian development finance institution (DFI) may have emerged in the Albanese government’s first budget even though there is a review still under way about consolidating the piecemeal initiatives of the past few years.

The decision to transfer $500 million from existing overseas development aid (ODA) over ten years to grant finance under the Australian Infrastructure Financing Facility for the Pacific (AIFFP) suggests that this new arm of economic diplomacy has to operate with a ratio of 25 per cent grants and 75 per cent loans to win hearts and minds in the region.

That’s where it started out when the then Morrison government took the first steps towards an Australian version of China’s Belt and Road Initiative (BRI) by creating the AIFFP with $500 million in grants and $1.5 billion for loans in 2018. But the Coalition’s pre-election budget in March significantly increased the lending envelope by adding another $1.5 billion. This was then described as allowing Australia to “support quality climate-resilient infrastructure in the Pacific without creating debt distress”. But it seemed to imply more lending relative to the grant funding available and perhaps reflected growing confidence about pulling off big infrastructure projects after the government support for the Telstra Digicel purchase.

Now the Labor budget has returned to the original ratio for using grants as the risk reducing sweetener for doing more aid via loans in the Pacific. AIFFP appeared to get off to a slow start by only announcing its first significant venture in June last year, which was to support airport development in Fiji. But the latest budget reveals it has now agreed to 12 infrastructure deals in nine countries valued at about $1.2 billion – including about $900 million in debt. So, the 75:25 ratio seems to be the sweet spot for implementing this new form of aid.

The government now has four consultants’ reports with suggestions or recommendations on how to craft a new lending regime to leverage aid dollars for infrastructure without creating excessive debt burdens in the small Pacific countries. And The Interpreter has hosted its own debate on a new DFI here.

At current stepped up project approval rates Australia could potentially commit (although not dispense) the existing $4 billion AIFFP funding in roughly four years.

The reports tend to support greater alignment between conventional ODA for soft infrastructure and lending for hard infrastructure possibly by a new agency. And they suggest Australia can catalyse essential new projects with equity or grants which can then be taken up by the private sector or governments. The author of the most recent report which seeded the AIFFP idea, John Eyers, returned to the subject here on The Interpreter to point out that the government already has plenty of on the job experience from AIFFP; the revamping of the Export Finance Australia to do more strategic work; and aid work with multilateral development banks.

Eyers notably urged a sort of hasten slowly approach to creating a whole new agency and that seems to be just what the government is doing. It has doubled down on the relatively conservative grant to lending ratio, cannily funded its electorally attractive Pacific Climate Infrastructure Financing Partnership from resources already provided under the Morrison government, and given DFAT an extra $27 million to administer all this (and other) new aid activity in-house.

Meanwhile the 12 AIFFP projects provide a snapshot into what is really the new frontier for Australia aid – alongside the Pacific labour scheme. The grant to lending ratio ranges from a generous roughly 50/50 for a $32 million electricity project in diplomatically sensitive Solomon Islands to a harder-nosed no grant, tiny Australian loan and only a private bank loan guarantee for the Fiji airports. The typical grant is running at around 20 per cent of the project value alongside a relatively cheap commercial loan with a roughly 20-year maturity.

At current stepped up project approval rates Australia could potentially commit (although not dispense) the existing $4 billion AIFFP funding in roughly four years, but won’t have recovered much in repayments by then. That would be a valuable contribution to the Asian Development Bank’s estimated US$30 billion infrastructure deficit in the Pacific through to 2030. But there will still be plenty of projects to go.

Treasurer Jim Chalmers maintains there is more unity in the Australian government than it appears over the need to restrain the skyrocketing domestic gas price in one of the world’s major gas producers.

Time will tell whether that is the case. But given the rising cost of energy is arguably the most existential challenge the new Labor government has faced so far it would not be surprising if the government overturns some economic and diplomatic principles to unify behind a voter friendly interventionist solution.

Kevin Gallagher, chief executive of the leading gas exporter Santos, has rhetorically escalated the diplomatic implications of an intervention to restrict gas exports saying this would take Australia down the “Argentinian road” of sovereign risks. He says:

You only have to look at countries like Argentina to see the impacts of market intervention and price controls – they never work, they kill investment so that supply dries up, they send prices through the roof and ultimately, energy and manufacturing have to be propped up with government subsidies that drive government debt to unsustainable levels.

Such warnings from the energy sector are not surprising given that Industry Minister Ed Husic has described gas exporters as a “swarm of locusts” for taking advantage of the high energy prices since the Ukraine war at the cost of undermining the manufacturing industry revival which the government talked up during the recent election campaign.

But what has been more striking has been the unrelenting campaign of opposition against any interference with gas exports by diplomats and officials from Australia’s closest Asian security partner in Japan. On the eve of Prime Minister Fumio Kishida’s visit last month, officials raised concerns about resource nationalism in Australia and Japanese companies called for more fossil fuel investment despite the new Australian government’s renewable energy focus.

The Japanese sovereign risk campaign against any possible Australian reshoring of gas to help support domestic manufacturers has prompted only reassuring responses from the Australian government. That is quite a contrast to the Australian sovereignty rhetoric not long ago in response to Chinese criticism of adverse foreign investment decisions, such as the case of Mengnui Dairy buying the Lion food products business.

Australia and Japan have talked up supply chain cooperation bilaterally and in the Quad in recent years and a key part of that is the reliable flow of Australian resources to Japan. But Japan arguably also has a broader security interest in Australia having some advanced manufacturing capability in the event of a disruptive regional conflict.

Former competition regulator Rod Sims has argued that Australia can reserve gas for domestic manufacturing by limiting spot market sales rather than interfering with long term contracted sales to the likes of Japan. But this gas export tension between two of Asia’s closest economic partners is going to be an interesting case study in defining the parameters of reshoring and friendshoring.

Australia and China are playing out an aid-funded geostrategic dance, with Port Moresby the chosen venue.
Matthew Dal Santo 26 Apr 2017 09:37

Should Macron win, you won't need to be a supporter of Le Pen's to believe that French democracy will be worse off.
Kerry Brown 21 Aug 2017 07:07

Big job ahead for China’s new envoy to North Korea

Kong Xuanyou will have to have a thick skin because he is dealing with some of the world’s most prodigiously talented producers of invective.