The strategic big picture was missing when US Secretary of Defense Jim Mattis visited Jakarta. 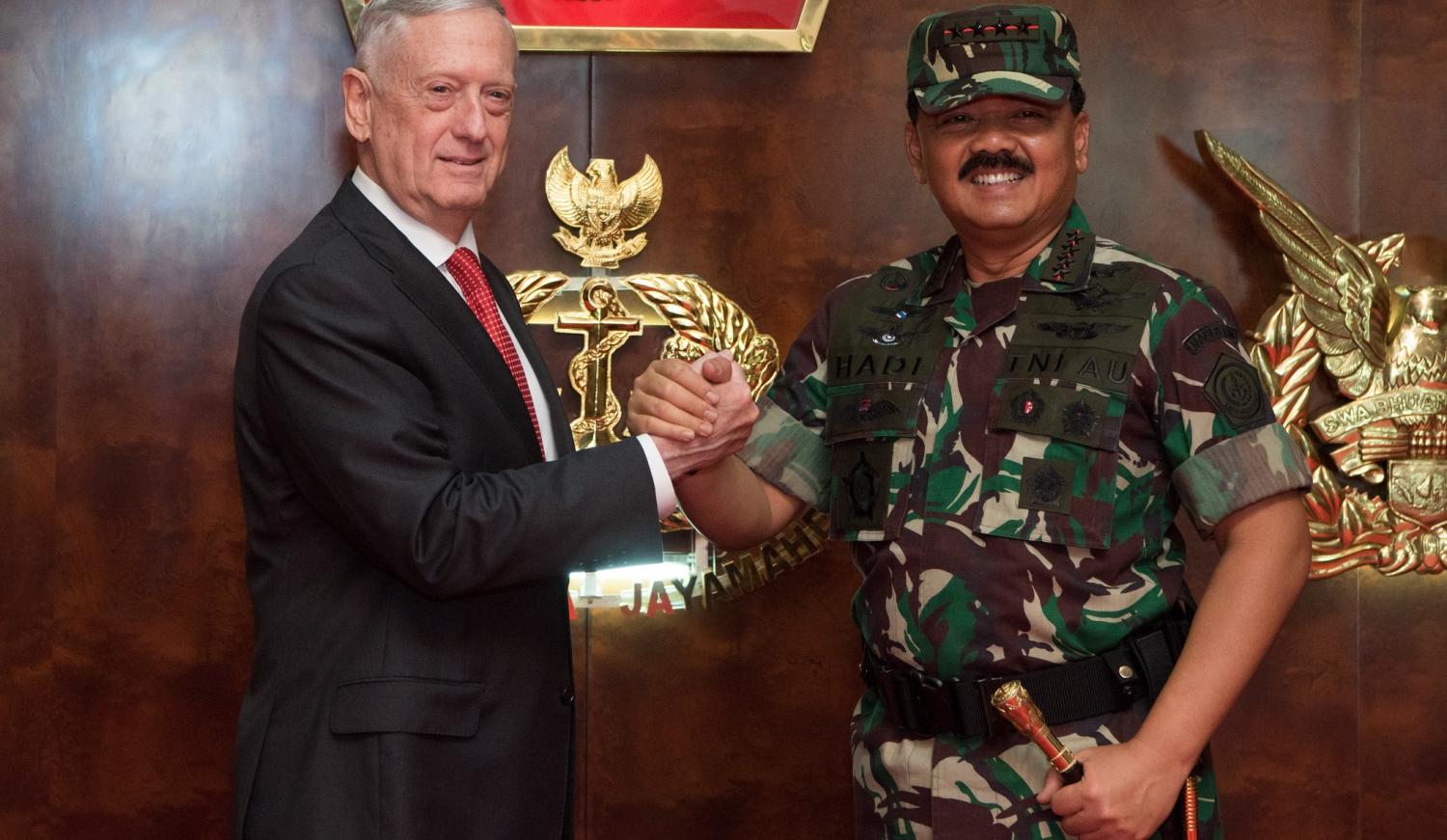 The US and Indonesia have declared an overarching “strategic partnership” to meet broader challenges, from regional architecture building to global governance. At least, this was the case under the Barack Obama (2008–16) and Susilo Bambang Yudhoyono (2004–14) presidencies.

But under President Joko Widodo (popularly known as Jokowi), Indonesia's foreign policy has taken a U-turn. Jokowi is not interested in playing the regional elder and global statesman engrossed with high-level diplomatic initiatives. He is less concerned with geopolitical challenges and more with “concrete” outcomes, such as trade, investment, and the protection of Indonesian citizens overseas.

Under President Donald Trump, US foreign policy has seen its own retrenchment. Washington's Indo-Pacific geopolitical construct is anchored around economic bilateralism and minilateral security arrangements, including the Quadrilateral Security Dialogue with Japan, India, and Australia. Multilateral institutions, such as the Association of South East Asian Nations or Trans Pacific Partnership, have taken a back seat. With China declared a strategic "competitor", North East Asia looms larger than South East Asia.

Unsurprisingly, bilateral discussion between Indonesia and the US over the past year revolved around a narrower set of issues, including trade deficits, counterterrorism, and China. The visit to Jakarta last week by US Defense Secretary James Mattis is another sign of this narrowing scope. The visit highlighted counterterrorism, arms sales, Indonesian Army Special Forces (Kopassus) training, and maritime security cooperation (including over the South China Sea and the Sulu Sea).

These issues are not insignificant, of course. But they distract from the wider picture and constitute a small part of the strategic partnership framework. They are issues that easily fall prey to false expectations and unexamined assumptions.

First among these assumptions is the problematic premise that Mattis's visit, aside from reiterating regional commitments, is meant to assist Indonesia in pushing back against China.

For one thing, it is debatable whether Indonesia is seriously seeking to push back against Beijing. Jokowi's South China Sea and China policies have been inconsistent and fractured by domestic and bureaucratic politics.

Some policymakers, such as the fisheries ministry and the military, have been arguing for a tougher position against China on account of its illegal fishing activities in the Natuna waters. The military's "development plans" around the Natunas, however, are built on pre-existing Minimum Essential Force (MEF) modernisation plans and are not designed to deter Chinese incursions in Indonesian waters.

Others, especially Jokowi's inner circle, are more concerned about maintaining good economic and financial ties with Beijing. After all, infrastructure and investment projects – where Chinese support is deemed critical – form a centrepiece of Jokowi's re-election campaign.

Occasionally, though, the president has been advised to take a strong stance on "sovereignty" to avoid the impression that Indonesia is too "pro-China". This is why, for example, we saw Jokowi lead a cabinet meeting aboard a warship in the Natuna waters in mid-2016, following an incident involving Chinese vessels.

Indonesian policymakers are still wary of being seen as accepting US support for the country's South China Sea policy. The foreign ministry in particular is less inclined to publicly support any moves that would put Indonesia on a collision course with Beijing or inflame the US–China competition. Above all, Jakarta values its strategic autonomy and "pragmatic equidistance" with the major powers.

The second assumption is that Indonesia needs US security assistance to stand up to China; however, there is little evidence that arms sales and training aid can do the trick.

There is a huge gap between what the US is prepared to deliver and what Indonesia genuinely needs for its MEF plans. This shopping list (set to 2024) includes dozens of new weapons platforms and systems across the board, from submarines and frigates to transport planes, fighter jets, and tanks; not to mention infrastructure development, new surveillance and reconnaissance “C4ISR” capabilities, as well as organisational restructuring.

No single foreign supplier can meet all of these demands. This is one reason why the MEF has included a wide range of suppliers, from Russia, China, and South Korea to the Netherlands and Brazil. When discussing procurement plans, defence policymakers have also not forgotten about the US arms embargo of the 1990s and 2000s.

US aid is likely to have limited meaningful effects on safeguarding Indonesia's expansive waterways. Bureaucratic rivalries plague Indonesia's maritime law enforcement agencies; its navy suffers from operational limitations and is in a state of decay; and the Coast Guard's fleet is miniscule.

Then there is the Kopassus training, which is only a fraction of the bilateral defence engagement. Indonesia–US military education and training exchanges have flourished over the past decade without Kopassus. But there is little systematic evidence that US training aid has "socialised" the Indonesian National Armed Forces (TNI), educating them about US concepts of democratic civil-military relations and operational effectiveness, or drawn Indonesia into a closer foreign policy orbit.

The TNI's doctrinal documents and education materials over the past several decades barely reflect American conceptions of war-fighting, professionalism, and civil-military relations. Further, out of 677 Indonesian Army generals who graduated from the academy from 1950 to 1990, less than 16% were US-trained.

Indonesia's "independent and active" foreign policy and domestic politics mean that public alignment with the US against China is unlikely. So why start with these narrow sets of issues rather than with boosting the strategic partnership framework?

Previous Article
Don’t renegotiate the Trans-Pacific Partnership
Next Article
The World Bank loses an economist: demand was less than supply

After an extraordinary week at home, the new PM will need to contend with a pressing international calendar.