Why has Pyongyang suddenly fessed up to an outbreak after years of insisting the virus has been held completely at bay? 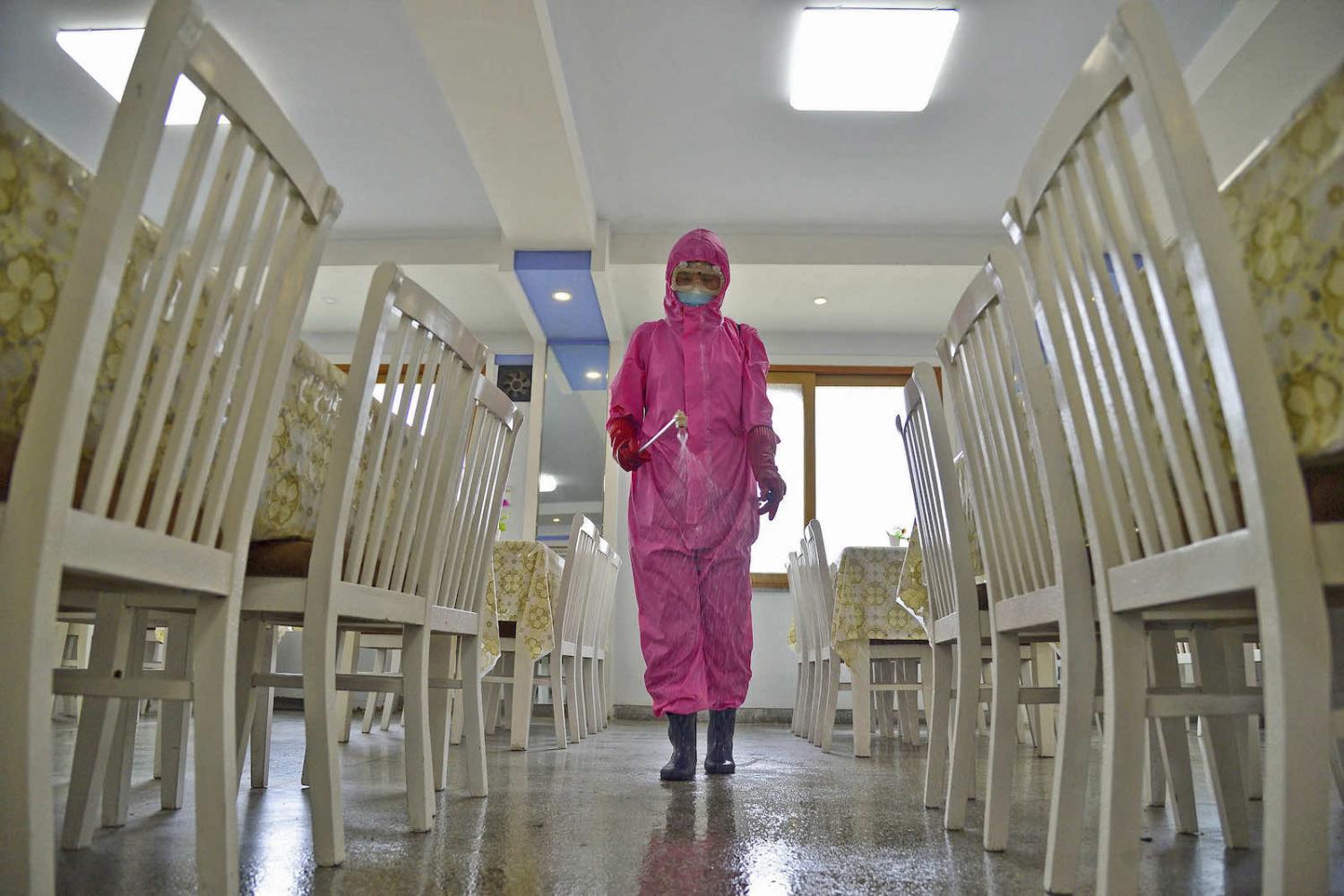 More than two years since North Korea locked down its border in January 2020 and went on to record zero Covid-19 cases and deaths across all the months since, the country last week admitted to a coronavirus outbreak that it claims began in late April. The latest figures from North Korea’s state media declare 1.5 million people (out of a population of 25 million) are suffering from fever, with 56 deaths from the virus. Other estimates put the number of cases at closer to 2 million. The jump in numbers appeared huge, given an early mention of the outbreak a week ago recorded roughly 190,000 people in quarantine and 350,000 people with fever. This in a country which has declined international offers to support a vaccination program.

It is not surprising that experts and sceptics alike question the validity of North Korea’s Covid numbers, given its lack of transparency and mass testing capacity. In April 2020, I wrote for The Interpreter about the unreliability of North Korea’s claim to zero Covid-19 cases (Vietnam, North Korea, politics and Covid-19: The numbers tell a story), and argued that state can easily censor any reports of infections in a bid to maintain a sense of normalcy, and keep its economic and military objectives on track. And indeed, for the past two years, North Korea has carried on as usual with its missile and nuclear development activities while weathering the negative economic impacts of its border closure with China.

The explosion of cases is as much puzzling as North Korea’s reported zero cases for the past two years.

So this sudden admission of an outbreak signals a major development for North Korea’s chairman Kim Jong-un, who had touted the country’s zero Covid cases as fulfilling his promise to improve the people’s living standards.

But just as it is difficult for outsiders to accurately judge the validity of North Korea’s Covid-19 statistics, it is also unclear what political motivations, if any, lie behind the admission. The sudden explosion of cases is as much puzzling as North Korea’s reported zero cases for the past two years.

Three plausible explanations can help guide our understanding regarding North Korea’s management of the outbreak and whether it might finally agree to receive international aid.

1.  North Korea really has an outbreak. And it is escalating beyond control.

Assume for a moment this outbreak has truly just taken place and the announcement is not some attempt to disguise what was instead a long-standing caseload. From a public health perspective, it seemed an outbreak of the virus was inevitable. The Omicron variant has proved more infectious, challenging neighbouring China and contributing to a global spike in infections. The state had also insisted on hosting maskless public gatherings for the 15 April celebration of late North Korea founder Kim Il-sung’s birthday in the absence of a national vaccination program.

North Korea’s healthcare infrastructure is ill-quipped to deal with an outbreak. Testing is lacking, along with the ability to properly care for sick people. This explains why state media records the number of people with fever but not with Covid-19. The inaccuracy of statistics is not necessarily an attempt to censor but could reflect North Korea’s inability to manage an outbreak in the first place.

If things worsen, Pyongyang may have no choice but to accept international assistance. So far, the North has sent aircraft to pick up medical supplies from China, but it is still silent on receiving medical aid from South Korea. It is possible that if China can adequately satisfy North Korea’s needs, Pyongyang will continue to say no to other foreign assistance. Kim has publicly expressed his admiration for China “in the struggle against [the] malicious epidemic” at a meeting last Saturday. Importantly, North Korea would not have to worry about Western interference if the aid came from China, or should China serve as a third party to deliver support.

2.  North Korea has had an outbreak. And the timing of the announcement is political

Whenever news emerges involving North Korea, it’s analytical habit to search for motivations. North Korea’s healthcare infrastructure has always been poor, so an outbreak should have occurred earlier considering reports by Daily NK of more than 100,000 suspected infections in the country in November 2021. Claims about large numbers of Covid-19 related deaths were not unheard of before the present outbreak, and many people were dying of virus symptoms after leaving state quarantine facilities.

In short, the suspicion is North Korea has had an outbreak before April 2022, and recent events just confirmed previous reports of community transmission that the government rejected.

The timing of this announcement about an outbreak is peculiar, however. Pyongyang would not want to attribute the spread of the virus to the 15 April celebrations (even in the face of reports of infections after these parades) given this news would tarnish the regime’s sacred holiday.

Whatever the government’s motives or the validity of the statistics, the indisputable fact is that North Korea is highly vulnerable to an outbreak.

But the timing does makes sense from a foreign affairs perspective. North Korea announced the outbreak a few days after the inauguration of South Korea’s President Yoon Suk-yeol and just ahead of a visit by US President Joe Biden to South Korea, expected on 20 May. Neither Biden and Yoon have shunned the diplomatic option with North Korea totally, even though both expect Pyongyang to be more provocative in the near future, the US warning of potential missile tests to coincide with Biden’s visit.

North Korea may want to test the water by using the outbreak as a pretext to resume inter-Korean exchanges. The rapidly increasing number of people reported to be suffering from fever might create a sense of urgency to help the North, which will allow Pyongyang to avoid having to reach out first. Importantly, the urgency can deflect criticism if North Korea decides to test nuclear weapons or long-range missiles later.

Still, such an explanation depends on North Korea’s response to South Korea’s or international offers of medical aid.

3.  In the end, all politics is local

On the day of outbreak announcement, North Korea launched three short-range ballistic missiles. It is worth noting that the government knew of the spreading infections but went forward with the tests anyway. The government had also fired a submarine-launched ballistic missile five days earlier.

Korea watchers have been speculating that the North may conduct a further nuclear test and are now asking whether the outbreak might lead to a rethink. History suggests Covid concerns have not stopped the country’s weapon programs over the past two years. North Korea will either test a nuclear device to show its strength in times of hardship, or it won’t because of repeated technical failures rather than the outbreak, although it will save face by blaming Covid for the halt in testing.

Kim might also want to use the announcement of outbreak to suppress growing public discontent against the national lockdown or to conduct a purge of officials. Kim had already accused senior officials of incompetence who “caused a grave incident that poses a huge crisis to the safety of the nation and its people”. An increase in the number of suspected cases might correspond with an increase in purges or wider crackdowns in the coming months.

If the timing is an effort to boost loyalty to Kim, North Korea is likely to emphasise ideological control under the Juche (self-reliant) mantra, and it will not accept outside medical assistance. International aid organisations have so far not received any direct or indirect requests for help from North Korea. The local military has been mobilised to provide medicine to people and lockdown surveillance measures have been strengthened, likely with twin goals to stop the virus from spreading and prevent a security vacuum in national defence.

In the end, it is the North Korean people that suffer from the choices made by their government. Whatever the government’s motives or the validity of the statistics, the indisputable fact is that North Korea is highly vulnerable to an outbreak. The international community should stand ready to offer humanitarian assistance to the country, and it should not be discouraged if North Korea says no.

Calls for a “China plus” strategy rightfully draws business attention to the need to manage rising geoeconomic risks.
Harriet Smith 24 May 2017 16:18

This week's links include the role for religious leaders and churches in climate change strategies, PNG pollies taking to social media, and the end of RAMSI on the Solomons.
Andrea Chloe Wong 6 May 2021 10:00

Philippines community pantries give help – and send a message

Filipinos are putting the Duterte administration on notice that its efforts to help during the pandemic fall short.