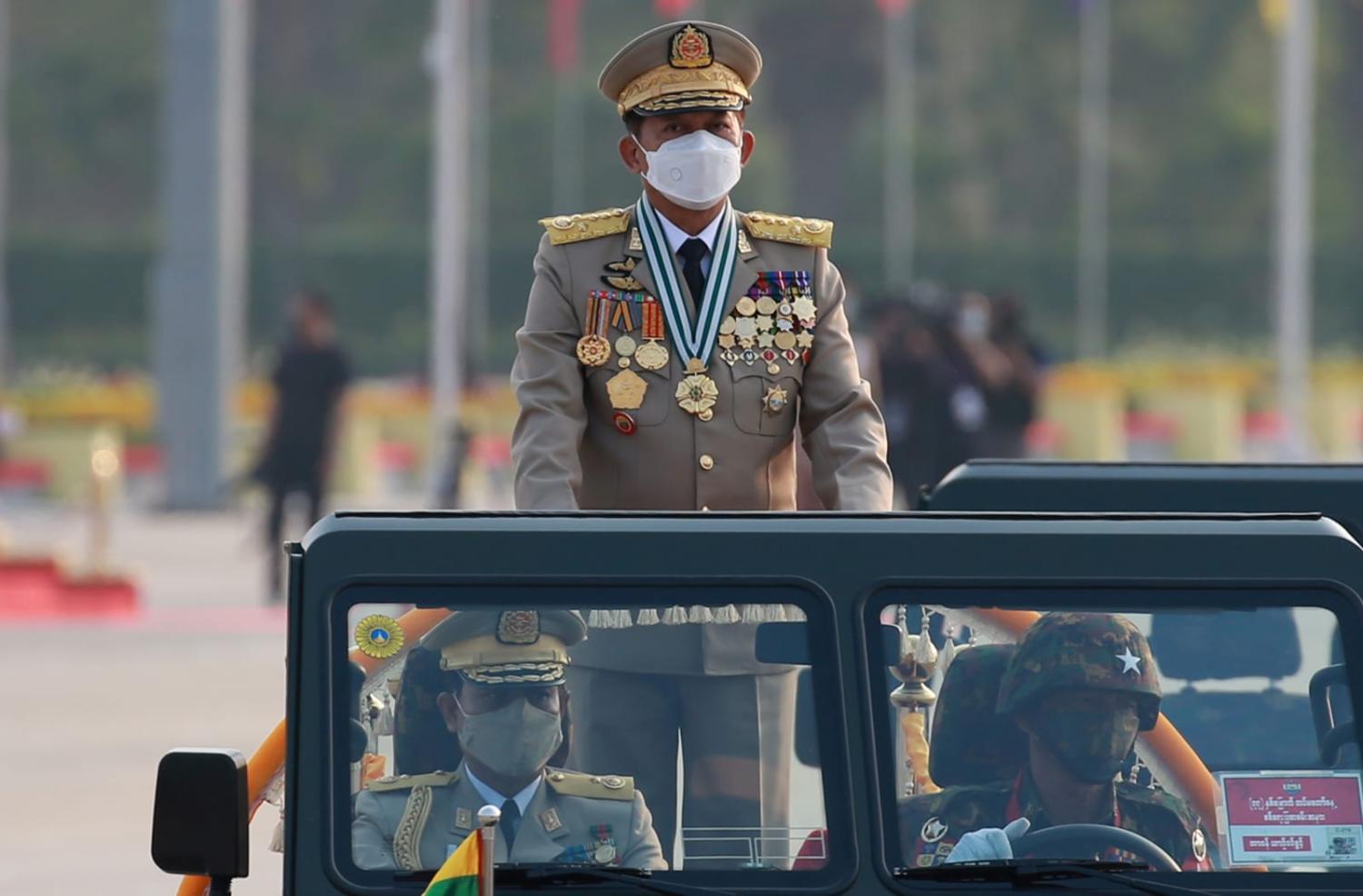 Senior General Min Aung Hlaing, leader of the junta, during a military parade in Naypyidaw in March (U Aung/Xinhua via Getty Images)
Published 29 Sep 2022     Follow @AdamJSimpson2

On Thursday, after almost 20 months in detention, a military court in Myanmar sentenced Australian academic and economist Sean Turnell to three years in jail for violating the country’s official secrets act.

Turnell plead not guilty but there was no prospect of being found innocent within the junta’s kangaroo courts. Since the coup of February 2021 the entire justice system has been corrupted and made subordinate to the military. Special military courts were set up in Naypyidaw, the capital, to try Turnell along with his former employer, the deposed Myanmar leader, Aung San Suu Kyi.

Suu Kyi received three years’ incarceration following conviction on the same charges, to be added to the 20 years she was already serving for a range of other bogus claims.

The lack of due process in these cases are demonstrated by the court proceedings being held behind closed doors. Turnell’s lawyers are unable to comment on the trial and Australian consular officials have been unable to attend the trial.

Turnell is the second prominent foreigner to be recently convicted and jailed by the regime. Vicky Bowman, a fomer UK ambassador to Myanmar and Executive Director of the Myanmar Centre for Responsible Business was arrested for “immigration offences” on the fifth anniversary of the Rohingya genocide. Immediately prior to the arrest the United Kingdom had decided to apply new sanctions against military-linked companies and intervene to support the Rohingya genocide case at the International Court of Justice. Bowman was sentenced to a year’s jail in early September, along with her Myanmar husband.

These cases are not about justice but the persecution of anyone deemed a threat to the junta.

The military is right to be concerned about their position.

Last week was High-Level Week for the 77th Session of the UN General Assembly in New York, and Myanmar’s UN seat is currently occupied by Kyaw Moe Tun. He has denounced the military coup and thrown in his lot with the opposition National Unity Government. The junta have tried to remove him but last year the credentialing committee couldn’t decide who should occupy the seat. The resulting status quo effectively left the NUG’s representative in situ.

Again, this year there was no decision from the committee, so Kyaw Moe Tun retained his seat.

While this can be seen as a win for the NUG, until the committee makes an explicit decision it causes confusion within the rest of the UN system. For example, Myanmar’s Human Rights Council seat remains vacant and the junta has appeared for Myanmar at the International Court of Justice.

Nevertheless, there are signs the NUG is building momentum with permanent representation in Australia and several other countries, as well as some members of the Association of Southeast Asian Nations, particularly Malaysia, becoming more bold in their engagement.

If the government thought that this softly, softly approach would lead to the release of Turnell, they will be sorely disappointed.

The junta’s isolation internationally is mirrored by their domestic worries, characterised by economic ineptitude and their inability to impose their authority on the country. A recent report by the Special Advisory Council for Myanmar argued that the NUG and ethnic resistance organisations have effective control over 52 per cent of Myanmar’s territory, with a further 23 per cent contested and the junta having stable control of only 17 per cent. While these figures are difficult to verify, it is clear that most of the country is now in open revolt against the junta.

The convictions of Turnell, Suu Kyi and their colleagues, like the execution of four democracy activists in July, therefore represent not a military junta, confident and in control, but one desperately trying, and failing, to shore up its own legitimacy.

Australia must continue to agitate for Turnell’s release, but there is little logic to the junta’s decisions. Some have argued that Bowman’s arrest was “hostage diplomacy” and a direct result of the UK’s sanctions. But Australia is one of the few Western democracies not to have applied new sanctions to the military since the coup.

If the government thought that this softly, softly approach would lead to the release of Turnell, they will be sorely disappointed. It should further disabuse the notion that treating brutal military regimes with kid gloves results in positive outcomes.

According to reports, Turnell and Suu Kyi are being relatively looked after, unlike the thousands of other political prisoners in Myanmar. And now that he has been sentenced, with Suu Kyi unable to play an active role in the military’s next election charade, negotiations may well begin to bring him back to Australia.

However, this is by no means a certainty, and he should never have been put in this situation in the first place.

To understand today’s protests, look to the decades past and the country’s incomplete transition to democracy.
Connor Macdonald 18 Sep 2018 11:00