Accepting military representatives in the genocide defence serves to lend the coup an undeserved legitimacy. 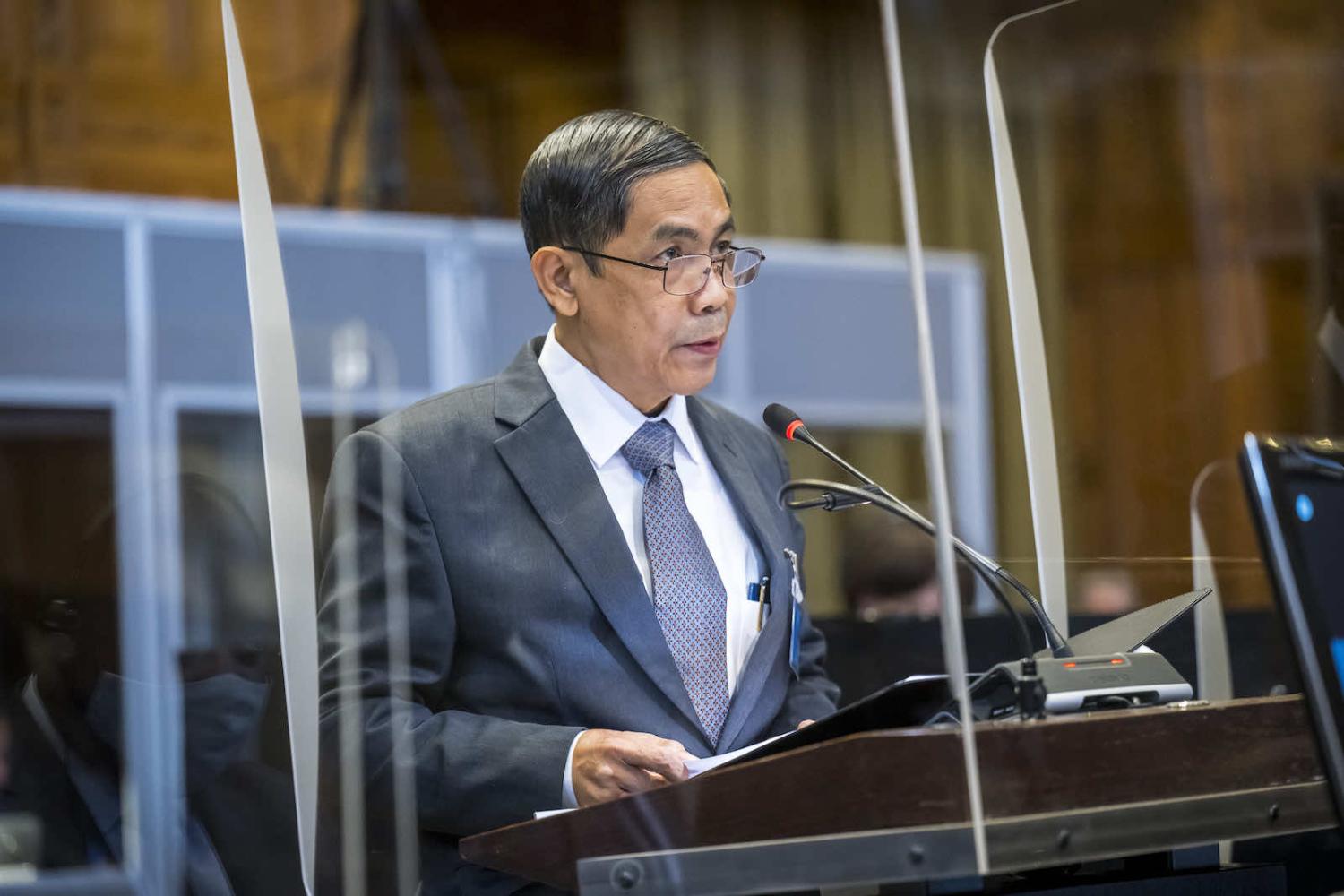 While the military coup in Myanmar has dominated mention of the country in international news over the last 12 months, the slow wheels of international justice for the Muslim Rohingya ethnic minority have continued to turn in the background.

In 2017 the Rohingya in Myanmar’s Rakhine State were brutally attacked by Myanmar’s military, leaving thousands dead and causing an exodus of an estimated 740,000 refugees to cross the border to Bangladesh in a matter of months.

As a result, in 2019 the Republic of The Gambia instituted proceedings against Myanmar at the International Court of Justice (ICJ) in The Hague. It argued that Myanmar was in breach of its obligations under the Convention on the Prevention and Punishment of the Crime of Genocide for acts that “intended to destroy the Rohingya group in whole or in part”.

In December 2019 the world was afforded the astonishing spectacle of Nobel Peace Prize laureate Aung San Suu Kyi vigorously defending Myanmar and its vicious military at the ICJ against these charges.

This week, the states returned to the ICJ but some of the actors have changed. Aung San Suu Kyi, along with her president, were arrested at the launch of the coup on 1 February 2021. She has therefore been replaced at the court by the military junta’s Minister of International Cooperation, Ko Ko Hlaing, and its Attorney General, Thida Oo. Both are subject to US sanctions due to the coup and the violent suppression of resultant peaceful protests.

The question of who represents Myanmar in international fora has been a contentious issue since the coup.

The military junta argues that it is the rightful government and that it assumed power through legitimate acts via the 2008 constitution. This argument was clearly fanciful and no serious analysis concurs with this view.

Myanmar’s National Unity Government (NUG)-in exile, comprised largely of elected members of parliament and ethnic minority representatives, has similarly been battling to represent Myanmar. It has achieved some success in the United Nations, largely due to the status quo being retained.

However, at the ICJ the junta has prevailed.

The ICJ President noted during her opening statement this week that “parties before the Court are states, not governments” with the clear implication that the representatives in the court do not reflect the conferring of recognition. Similarly, some organisations have argued that appearance at the court does not lend legitimacy to the junta, since it only reflects a continuation of the status quo in court procedures.

There are four key problems with this approach.

First, it does not reflect the status quo. Previously, Aung San Suu Kyi represented Myanmar in the court as the leader of a nominally civilian government led by her National League for Democracy (NLD). For all the problems with the NLD government and its approach at the court, it was democratically elected in a landslide in 2015, which was repeated at the elections in 2020. To suggest that having delegates of the military junta that overthrew that government represent Myanmar is the status quo is a clear misreading of the process.

Second, the ICJ is the “principal judicial organ” of the United Nations and therefore there is an argument to be made that its approach should be consistent with other UN organs such as the General Assembly. The United Nations is a single legal entity, notwithstanding the formal legal equality and separation of its organs, and it is logically inconsistent, to say the least, to have the junta represent the state of Myanmar before one UN organ, while the NUG represents Myanmar before another.

Third, and more importantly, this is not only a legal case, it is political theatre. Aung San Suu Kyi understood this keenly when defending Myanmar and the military at the international court as part of her nationalist re-election campaign at home. The global media coverage of the military junta speaking for Myanmar, and the President of the Court referring to their appointed agent as “Your Excellency”, confers a perception of legitimacy upon the junta, regardless of debates over legal minutiae.

Fourth, it has led to delays in considering the substance of the proceedings. The military junta has continued Aung San Suu Kyi’s preliminary objections in the case, arguing that The Gambia was acting as a “proxy” for the Organisation of Islamic Cooperation, and also that it lacked standing to bring the case.

In contrast, the NUG has withdrawn the preliminary objections and contends that UN Ambassador Kyaw Moe Tun, who supports the opposition, is “the only person authorised to engage with the Court on behalf of Myanmar”.

These hearings, with the junta claiming to represent Myanmar, are a disgrace. [The preliminary] objections are the focus of these hearings and will require several months of deliberation by the judges. The Court should instead recognise the NUG’s authority, formally dismiss the objections and move swiftly to dealing with the actual substance of the case, the atrocities against the Rohingya people.

Unfortunately, with proceedings having commenced, it is very unlikely the court will direct a change in representatives for Myanmar’s defence. Proceedings were already likely to take many years to reach any conclusion. Now, with months of wasted time to come debating the preliminary objections, Myanmar’s long suffering Rohingya will need to accommodate the glacial pace of international law before achieving any semblance of justice.

Simply comparing the estimated number of combatants on the two sides is not a valid basis to assess combat capabilities.
Melissa Crouch 20 Nov 2018 13:00