It can be simplistic to reduce complex problems to two stubborn people, but we can wonder about what might have been. 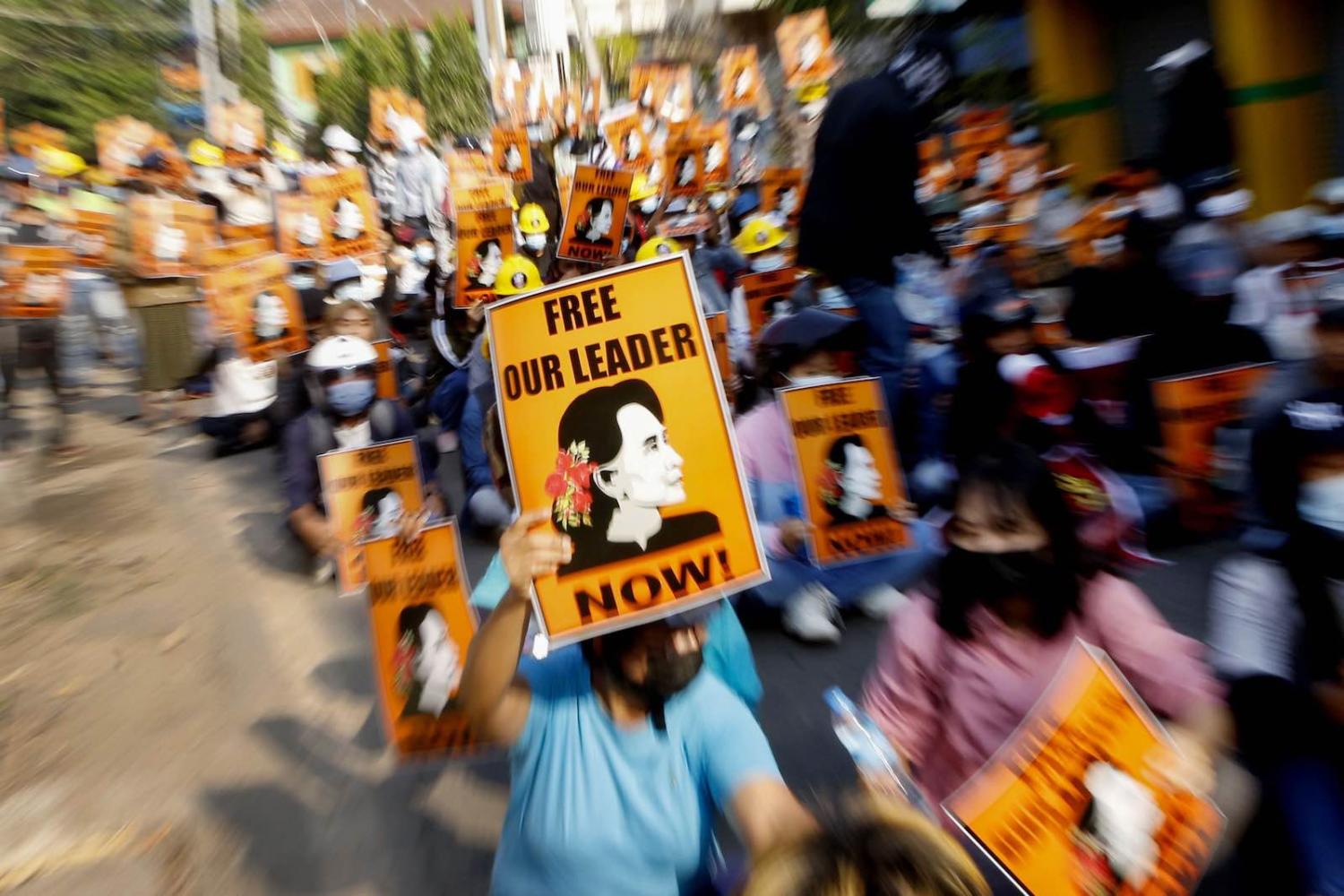 Anyone looking at photographs and film footage of events in Myanmar could be forgiven for thinking that the violent confrontation between demonstrators and security forces represents a proxy battle between the ousted State Counsellor Aung San Suu Kyi and the Commander in Chief (C-in-C) of Defence Services, Senior General Min Aung Hlaing.

The demonstrators carry placards depicting the National League for Democracy (NLD) leader. Crowds have staged sit-down protests wearing cardboard masks of her face. Min Aung Hlaing also features on their placards, but his face is disfigured by large crosses. Streets have been covered with such posters.

Such a binary view is attractive in its simplicity, but it fails to take into account the complex problems which, in ways that are yet to be determined, lie behind the 1 February military coup. At another level, however, the idea has some merit, in that it acknowledges the country’s tradition of highly personalised politics and the ability of select individuals in Myanmar, if the time is right, to alter the course of history.

It has long been the case that political parties, civil society organisations and armed groups in Myanmar coalesce around powerful and charismatic figures. Institutions are generally weak, and bureaucracies are inefficient and corrupt. Declared policy is rarely seen as the firm basis for future action. Legitimacy derives not so much from structural foundations but from intangible factors such as a person’s character, background and karma.

Such figures act in turn as patrons (saya), gathering around themselves acolytes (tapyit) who owe their loyalty more to their leader than to any institution or policy platform. The NLD, for example, started with a collective leadership and broad manifesto but soon came to rely for its effectiveness on the popularity and personality of Aung San Suu Kyi, the daughter of Aung San, Myanmar’s revered independence hero, who was assassinated in 1947.

Particularly since Aung San Suu Kyi’s release from house arrest in 2010, she has dominated the party, dictating policy, reserving key decisions to herself and enforcing her will over colleagues, including elected members of parliament. By sidelining her rivals, driving out her critics and rewarding loyal service, she has ensured that there is no one left to challenge her paramount position. She personifies the party and has no obvious successor.

Despite five years in power, the NLD failed to implement many of the reforms promised before the 2015 elections. Also, Aung San Suu Kyi dramatically fell from grace in the eyes of the international community after her public defence of the genocidal campaign against the Rohingya in 2016–17. Yet, she remains immensely popular within Myanmar. Indeed, the NLD’s landslide election victory last November was essentially a vote for her.

Both Aung San Suu Kyi and Min Aung Hlaing are considered stubborn, strong-willed and reluctant to see other points of view.

This tradition of personalised politics extends even to the security forces. Despite the formal rank structures and hierarchical organisations of their services, senior military and police officers have always cultivated circles of supporters, who owe them their personal loyalty. As far as the system allows, they act as patrons, while their subordinates become protégés. These informal support networks often act in parallel to regular systems.

One drawback to this practice, however, is that the fall of a senior officer can mean that his entourage falls with him. This was demonstrated in 2004 when General Khin Nyunt, the powerful chief of intelligence, was arrested and put on trial by his rivals within the armed forces. Almost the entire military intelligence corps was removed at the same time, as it was considered loyal to him and thus a potential threat to the wider defence services.

Min Aung Hlaing is the most senior officer in Myanmar’s armed forces and, through various military appointments, also controls the country’s police force and intelligence agencies. He thus sits at the apex of the state’s coercive apparatus. It is believed that, since his appointment as C-in-C in 2011, he has also seeded the higher command structure of all these organisations with officers who are personally loyal to him.

Min Aung Hlaing is reported to be controlling, egotistical and ambitious, and prepared to exercise power without hesitation to achieve his desired goals. He rose steadily through the ranks, despite becoming unpopular due to his failure to care for the troops below him. He developed a reputation for ruthlessness conducting operations against ethnic insurgents and had no hesitation in ordering brutal “area clearances” against the Rohingya.

Both Aung San Suu Kyi and Min Aung Hlaing are considered stubborn, strong-willed and reluctant to see other points of view. They also have strong personal interests at stake. Aung San Suu Kyi has an abiding sense of personal destiny, seeing herself as her father’s heir as the leader of Myanmar. Min Aung Hlaing is due to retire as the Commander-in-Chief in July 2021 and reportedly wishes to retain power, either as C-in-C or as the country’s president.

According to the Myanmar rumour mill, the two of them detest each other. While they initially worked out a rather awkward modus vivendi, they have reportedly not spoken for over a year. This is despite the fact that the “disciplined democracy” introduced by the former military regime in 2011 was always envisaged to be a power-sharing arrangement between civilian political parties and the armed forces.

A key issue after the November 2020 elections was apparently Aung San Suu Kyi’s refusal even to discuss Min Aung Hlaing’s claims regarding electoral fraud. Indeed, the story goes that she was very blunt in telling the C-in-C that she would not consider any challenges to the result. This reportedly caused great offence in military circles, which were already smarting from their public humiliation at the polls.

Thomas Carlyle once wrote that “the history of the world is but the biography of great men” (and women). It would be far too simplistic to reduce the nationwide uprising against the security forces in Myanmar to a competition between two people, but the question must be asked whether two leaders with different personalities, and with Myanmar's national interests at heart, might not have managed to find a way of avoiding the current impasse.

No one is advocating that Aung San Suu Kyi surrender the NLD’s emphatic win at last year's polls, which all neutral observers agree accurately reflected the country’s wish for a more democratic government. However, the price of challenging the armed forces’ self-serving vision of a “disciplined democracy” would appear to be the loss of government, massive long-term disruption to Myanmar society and blood on the streets.

The Covid-19 “infodemic” has made plain the risks from ill-intended videos and photos. This is true for elections, too.
Phyu Phyu Oo 11 Feb 2021 14:00

Popular resistance to the military coup has taken a variety of forms, some of them harder to silence than others.
Rodger Shanahan 22 May 2017 14:19

Iranian politics nothing if not opaque

One should also be wary of using the result to forecast Iranian policy direction given the circumscribed powers of the president.