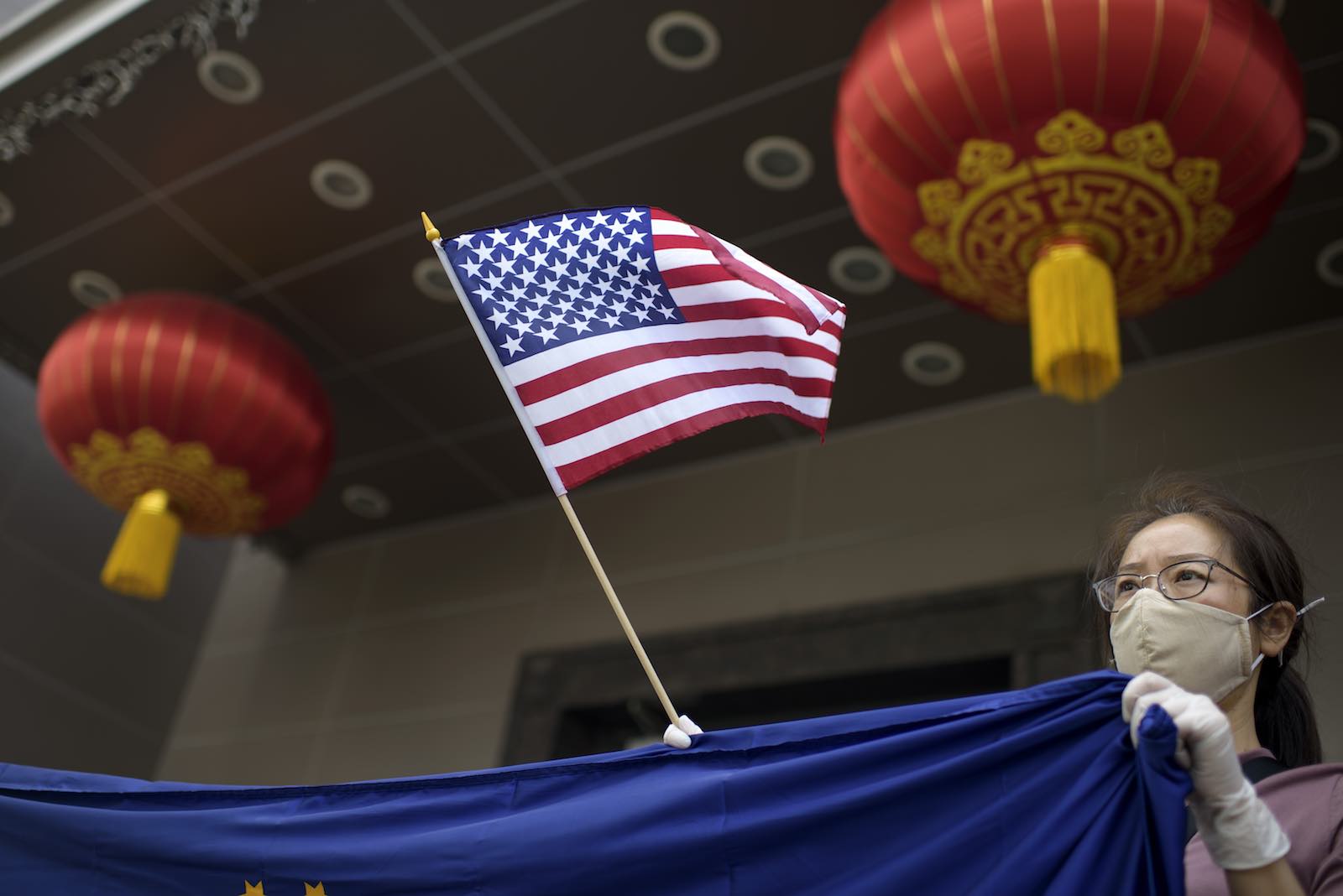 A protester holds a US flag outside of the Chinese consulate in Houston after the Trump administration ordered it be closed (Mark Felix/AFP via Getty Images)
Published 28 Jul 2020 12:00   0 Comments       Follow @NickBisley

In recent weeks, the Trump administration has busily tried to smooth out what has been a fairly ragged Asia policy. Secretary of State Mike Pompeo’s speech at the Richard Nixon Presidential Library last week was the culmination of a number of set-piece acts intended to emphasise a yet harder line on China and a greater degree of coherence about US strategic policy towards its geopolitical competitor.

Secretary of Defense Mark Esper’s virtual speech two days earlier to the International Institute for Strategic Studies, the demand that Beijing close its consulate in Houston, and the 13 July statement on the South China Sea each played their part in a new rhetorical front Washington has opened on the People’s Republic of China. The US has also imposed sanctions on senior party officials, having earlier restricted Chinese diplomats and removed Hong Kong’s special status.

There can be no doubt that Washington sees Beijing as an assertive and indeed insidious power that needs not only to be contained but to be actively pushed back. Indeed, Pompeo’s “I come not to praise engagement but to bury it” speech explicitly sought to portray China and in particular the Chinese Communist Party as an ideological foe that must be vanquished as its inherent malevolence presents an eternal threat. At many points over the past 18 months – starting with Vice President Mike Pence’s October 2018 speech to the Hudson Institute – senior figures of the Trump administration have all, in different ways, articulated a hardline posture towards the PRC. But as Pompeo put it, he sought “to put it all together for the American people”.

So why pull the threads, such as they are, together at this point in time? In part it’s because of the impending general election. The administration has clearly decided that attacking China will be a central part of its re-election strategy. Pompeo’s ideologically soaked rhetoric was intended to frame US policy towards the PRC in world historical terms as part of an election gambit that presents Trump as a tough leader who had the strength to break with the established approach. Biden will be portrayed as a sell-out lacking the moral fortitude to defend American values. In an election year, the domestic politics of foreign policy is always higher than normal – in 2020, it may well be at an all-time high.

It is also about signalling that the US will to do more across the board to push back against the PRC. The message sent by sailing aircraft carrier battlegroups, declaring the PRC’s South China Sea claims illegal and a series of high-octane speeches is clear: Washington intends to act in ways that it has not previously to pressure the PRC. Partners in Tokyo, Seoul, Canberra and elsewhere should also get the message – Washington expects you to do more as well. Esper’s speech almost literally walked its way through every partner in the region, showing not just that the US has more friends than Beijing does, but also that it has increased expectations.

This flurry of activity is illustrative of the shortcomings of US Asia policy, dialling up the rhetorical temperature to no great advantage.

The Trump administration’s first-term regional policy has been an incoherent mess. While these latest moves are an attempt to achieve more consistency than in the past, it is more than likely that the gambit to toughen up on China will fail to achieve its desired ends. There are several reasons for this beyond the basic fact that the government under Trump has been unable to develop and advance a consistent approach to US interests in Asia.

The contrast in tone and means between the White House’s China strategy published in May and the content of Pompeo’s speech is illustrative of an administration that speaks in multiple and non-harmonic voices about its Asia policy. Equally, the tough messaging sits uncomfortably with the reality of presidential action in relation to China, most obviously the limp January trade deal and the soft treatment of Xi Jinping by Donald Trump over many years.

As the Brookings Institute’s Tom Wright has pointed out, one of the major problems with the framing of US policy in values-based terms is that it is at odds with key aspects of US foreign policy under Trump. Washington has signalled highly inconsistent attitudes toward human rights, democracy promotion and values more generally. He has been cavalier in the treatment of democratic allies, while according to former national security advisor John Bolton, he encouraged the PRC’s horrific treatment of Uyghurs, to say nothing of Trump’s heedless approach to democratic norms domestically.

Trump and his government have demonstrated a love of bombastic rhetoric unmatched by substantive action. The approach to North Korea is typical of this. Trump dialled up the tensions to a very dangerous level and then settled for two photo-op summits that benefitted Kim Jong-un and led nowhere except to the tacit acceptance of the Democratic People’s Republic of Korea as a nuclear power. Beijing has noticed this tendency to talk loudly and carry virtually no stick. So it is unlikely this latest attempt to push a harder line will change PRC behaviour.

A further way in which this flurry of activity is illustrative of the shortcomings of US Asia policy is that it dials up the rhetorical temperature to no great advantage. Indeed, for many allies this needless escalation is counterproductive, as this kind of unsubtle statecraft narrows their strategic room for manoeuvre, to no benefit for anyone.

It is important that the US is clear about its strategic intent – in the past, there was a little too much Voldemort-style ambiguity about Washington’s approach to China, as in never to directly name the enemy. But the failure to think through the ends and means of US policy, with clumsy public messages too focused on domestic matters and no consideration of allies has been all too typical of how this administration has approached Asia.