When a sports club thinks strategically, governments can benefit too. Trust between Australia and China is at a nadir. Little more than a year ago, the prospects for positive long-term engagement remained strong – not just for business ties, but also for that most peculiarly Australian game. AFL club Port Adelaide had taken Australian football to Shanghai for the first games played for premiership points in Asia. That all stopped with Covid-19. But in a bilateral relationship characterised by increasing estrangement, sport may be called upon again to help pull the relationship back from ruin.

Port Adelaide’s engagement in China from 2015 provided an interesting case study in sports diplomacy. I played a role as a club official in charge of China engagement and have described the experience in a new book, Port Adelaide to Shanghai: Taking Australia’s Game to the World. The club’s decision was commercially motivated. The field of professional sport in Australia is heavily contested, and Port Adelaide made a strategic decision to look beyond our national boundaries for opportunities, sponsors and fans.

Port Adelaide also understood the opportunity to contribute to something far greater than only sport. We believed informal sporting networks and personal relationships, as well as milestone moments during which such networks and relationships could be consolidated, would create opportunities for formal political and diplomacy between the two nations.

The worldview of many people in Australia and China is formed in fundamentally different political, economic, legal, historic, linguistic and cultural contexts. Although the economic opportunity is attractive, particularly from an Australian perspective, engagement in China is often challenging. That goes for diplomacy, too.

Sports diplomacy can help address a lack of familiarity or bring respite to periods of tension. While diplomats and businesspeople often sit on opposite sides of the table to negotiate agreements, at games of Australian football, they sit alongside each other. Sport has, to borrow from Nelson Mandela, “the power to unite people in a way that little else does”. 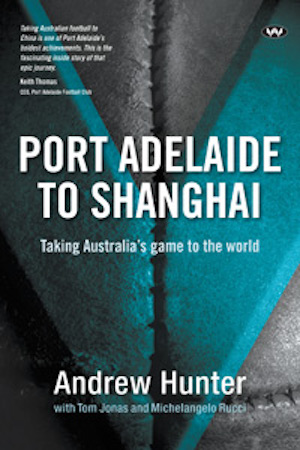 Over the past five years, Port Adelaide participated in – and helped create – some of the more positive moments in the bilateral relationship. It occurred far too often to be coincidence or “dumb luck”.

Port Adelaide to Shanghai describes the discussions that led Malcolm Turnbull to announce Port Adelaide’s intentions to play an official game in Shanghai at his first official engagement on his first visit to China as Prime Minister. Less than a year later, in March 2017, Premier Li Keqiang and Turnbull visited Port Adelaide’s change rooms ahead of our round one match at the Sydney Cricket Ground. As coach Ken Hinkley delivered his pre-match address, Turnbull and Li handballed a footy to each other in a crowded SCG change room. At the sidelines of APEC, Li mentioned in their bilateral meeting several months later that in his office in Beijing, he had a picture of him and Turnbull wearing footy scarves.

The first AFL match in Shanghai occurred soon after, on 14 May 2017. The sold-out game worried local authorities, who were concerned that any crowd violence or other incident could distract from the first Belt and Road Forum held in Beijing, taking place on the same day. About 1000 uniformed security personnel assembled, sombrely standing in contrast to the vivacity of the thousands of travelling Port Adelaide supporters. Yet many of these same officials were seen laughing together after the game, kicking gifted footballs and emulating the feats they had witnessed on the ground.

The excitement of that first match was difficult to replicate the following year. It did, however, provide the backdrop for the first visit of any Australian minister to the mainland in many months: demonstration that, as an informal diplomatic tool, sport can diffuse tension in relationships and provide the opportunity to come together in an unthreatening context.

The then–trade minister Steven Ciobo had been refused a visa to China three times in the year prior to the game. However Ciobo’s request to attend the 2018 match was accepted. This gesture, according to The Australian newspaper’s correspondent Rowan Callick, “marked something of a re-stabilisation of relations at the official level”.

The frequency with which Australian football had provided a backdrop for some of the brighter moments in the recent history of the bilateral relationship encouraged us to ask whether the annual AFL match could inspire a regular platform for exchange. So in March 2019, at Adelaide Oval, Trade Minister Simon Birmingham announced a two-week program of business networking, consumer activities and online promotions across ten Chinese cities and culminating in the match between Port Adelaide and St Kilda. The Festival of Australia included more than 40 events and attracted a digital reach of over 90 million. Once again, Australian football contributed to a positive moment in a strained relationship.

As we look beyond the disruption of Covid-19, the opportunity exists once again to deploy sport in the name of diplomacy. An annual AFL match in Shanghai, as part of a broader platform of events, would deliver positive and ongoing engagement.

While diplomats and businesspeople often sit on opposite sides of the table to negotiate agreements, at games of Australian football, they sit alongside each other.

It is in Australia’s interests to revisit the Festival of Australia concept, with an AFL game the jewel in its crown. It would serve the bilateral relationship by providing a channel free from influence of third parties, allowing Australia to demonstrate an independent identity and diplomatic posture.

This may not be possible in 2021, not least because of the continuing problem of the pandemic and an AFL industry looking to find its feet after a period of disruption. July 2021 will also mark the 100th anniversary of the CCP, which will no doubt bring a strong inward focus that could overwhelm any positive, outward-oriented initiatives.

But Australia has important decisions to make. The Inter-Parliamentary Alliance on China has asked the International Olympic Committee to reconsider staging the 2022 Games in Beijing. This call has been supported by some members of the Australian parliament. But to what end?

Australia’s diplomatic and commercial interest would be best served by participating in the Winter Olympics and reviving the annual AFL match, as part of a Festival of Australia. Sports diplomacy helped forge a path from Port Adelaide to Shanghai, but for Australia and China, there is a long road ahead.

Previous Article
Beijing’s line on the South China Sea: “Nothing to see here”
Next Article
Prospects for a G20 “pandemic treaty”

Clever use of deterrence techniques, air defence zones and artificial intelligence are critical for the military allies.
Catherine Wilson 11 Oct 2018 14:15

Post-war justice has been elusive, but until grievances are confronted, the consequences of impunity can be deadly.