Moscow is likely seeking victory on the cheap against Kyiv – which offers an opportunity to influence its strategy. 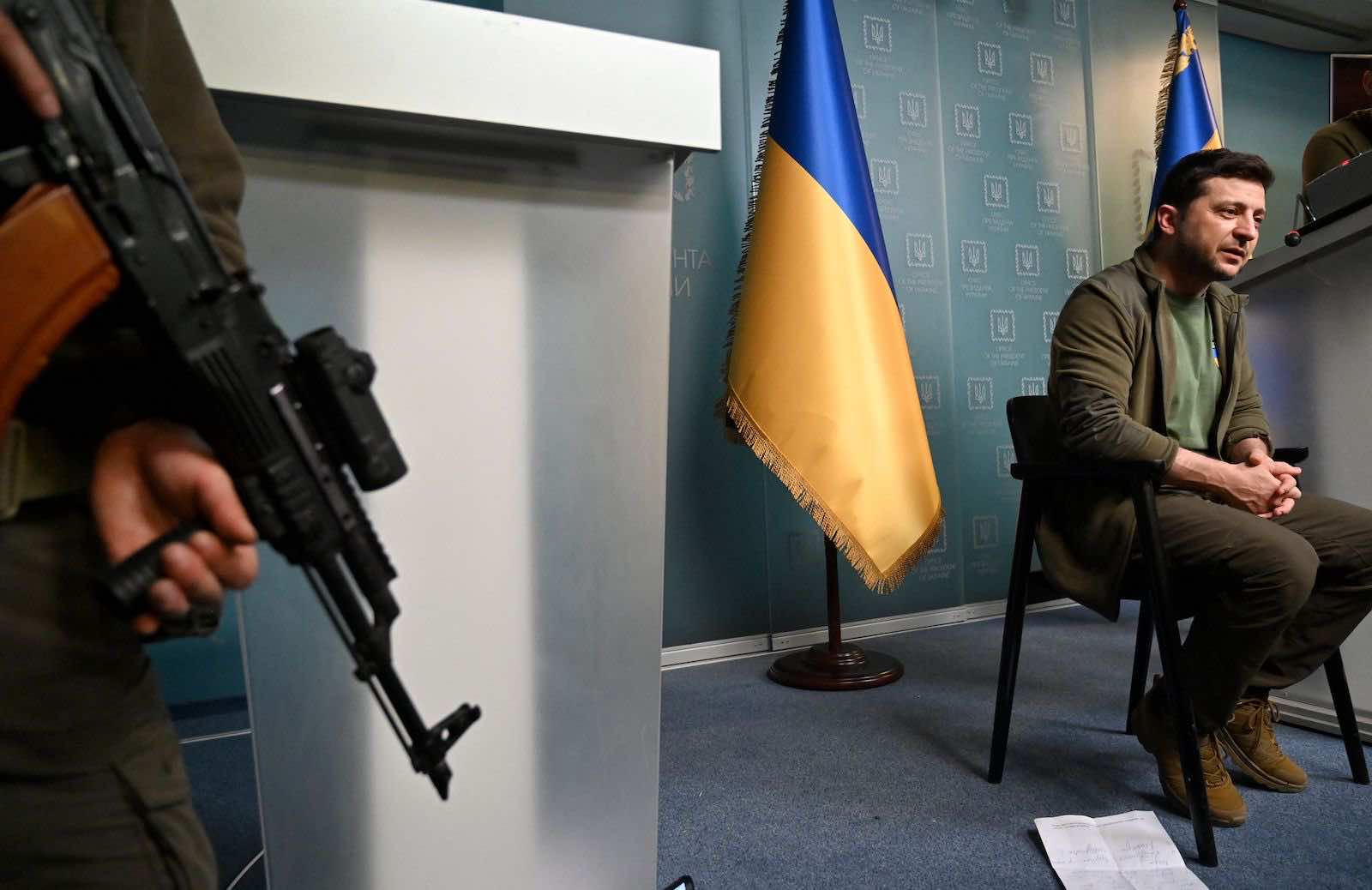 Volodymyr Zelensky must plan for the continuity of his government and work to invest it with his personal standing (Sergei Supinsky/AFP via Getty Images)
Published 4 Mar 2022 14:00   0 Comments       Follow @VKAbramowicz

Vladimir Putin proclaimed set of objectives for his newest invasion of Ukraine appear paradoxical. Putin noted Russia’s key aims for Ukraine were a replacement of Volodymyr Zelensky’s “Nazi” government, demilitarisation, rejection of NATO membership, recognition of the separatist states in the Donbas, and acceptance of the Crimea as Russian.

Yet Putin also stated that Moscow would not occupy the country – and how could these maximalist aims be met without the Kremlin physically imposing them?

Further, Russia’s military strategy also appears strange. Having spent months positioning nearly 200,000 troops and their supporting equipment, Moscow was ready for a knock-out blow, an approach Putin himself has favoured from his judo experience.

Yet instead, the Kremlin appears to have attempted “invasion light”. It has relied on a rush towards especially Kyiv using only a (slowly increasing) portion of its armies and aircraft, while avoiding major battles and exerting a limited use of force, and also attempting to kill or capture Zelensky using special forces. Yet, predictably, without a knockout punch this approach seems to have foundered, with Russia’s forces running into logistical difficulties, units suffering important losses, and Zelensky’s government showing no sign of giving up.

How to explain these events? Answers range from doubts about Putin’s mental health, to suggestions that Moscow’s armed forces are simply not very good at war. However, a more persuasive justification is that the Kremlin has acted logically (if overconfidently) and sought to achieve victory on the cheap – that is, at minimum cost (financial, military, diplomatic and otherwise) and risk to itself. This notion provides a means to square the circle of Putin’s incongruous announcements and strange military approach.

Specifically, a (relatively) cheap and easy victory for Moscow would be one where it achieved its ends without needing to fight major battles or subdue a nation of 44 million people. And to achieve this, Putin’s plan likely involved seizing Ukraine’s capital (with the city ideally surrendering at the very sight of Russian forces), installing a puppet regime that claimed sovereignty nationwide (with Zelensky captured, dead, or at worst fled), and then signing a peace treaty on Moscow’s terms.

Such a strategy, while relying on overconfidence in Moscow’s forces and underestimation of Ukraine’s, helps explain Russia’s behaviour as it offers a path to easy triumph. So, promptly seizing Kyiv would provide a certain de facto authority to any successor regime – even one clearly not in control of all Ukraine. And, of course, with a peace signed, the war’s aims would notionally be met with no further violence; also, any Russian forces that remained would be at the invitation of the new government rather than as occupiers.

Of course, ongoing armed resistance would be on the cards, especially if Zelensky survived and formed a government in exile. But agitation by such a group could be painted as the actions of illegitimate warmongers bent on perpetuating an otherwise resolved conflict. Further, some Ukrainians would end up in the puppet authority’s employ, with ongoing fighting pitting “family against family” – making such violence more difficult to justify in comparison to citizens facing a clear foreign foe. These same issues would surely also concern any exiled government’s Western backers.

Ukraine’s backers must be clear that they only recognise the current government and that any peace agreement without it has no standing.

So, there seems likely to be method in Putin’s madness. And while the Kremlin’s initial military approach has seems to have failed, it appears Russia is planning on pursuing the same method but by fighting its way into Kyiv, as this still circumvents having to capture all Ukraine. Yet this consistency offers a means to attack Moscow’s strategy for an easy win.

Most importantly, Zelensky must plan for the continuity of his government and work to invest it with his personal standing, which has justifiably skyrocketed. An administration that can survive his loss and that of Kyiv (noting Russia does have the raw military power to seize the city), and rally domestic and international support while driving resistance, will deprive Moscow of a trump card: the lack of an alternative to the regime it will likely try and install.

In turn, free Ukraine’s backers must firstly be clear that they only recognise the current government; that they will continue to provide it with financial, diplomatic and military support; and that any peace agreement without it has no standing. Further, they must reiterate that the sanctions against Russia will continue until all of Moscow’s forces leave Ukraine; regardless of any potential “invitation” to remain by a puppet government.

These measures provide a means to, however imperfectly, affect Putin’s assessment of his chances of quick triumph, and so influence his decision making: if cheap, easy victory is impossible, then Russia has incentive to seek peace short of its maximalist aims.

Of course, it is possible that, as with so many wars in history, the situation has moved beyond such rational considerations. Yet by addressing these avenues to influence the Kremlin, there is the potential to help avert a more dreadful further escalation of violence.