POTUS does a Putin

When a US president’s policies are indistinguishable from the KGB heirs’, the world is indeed turned upside down. 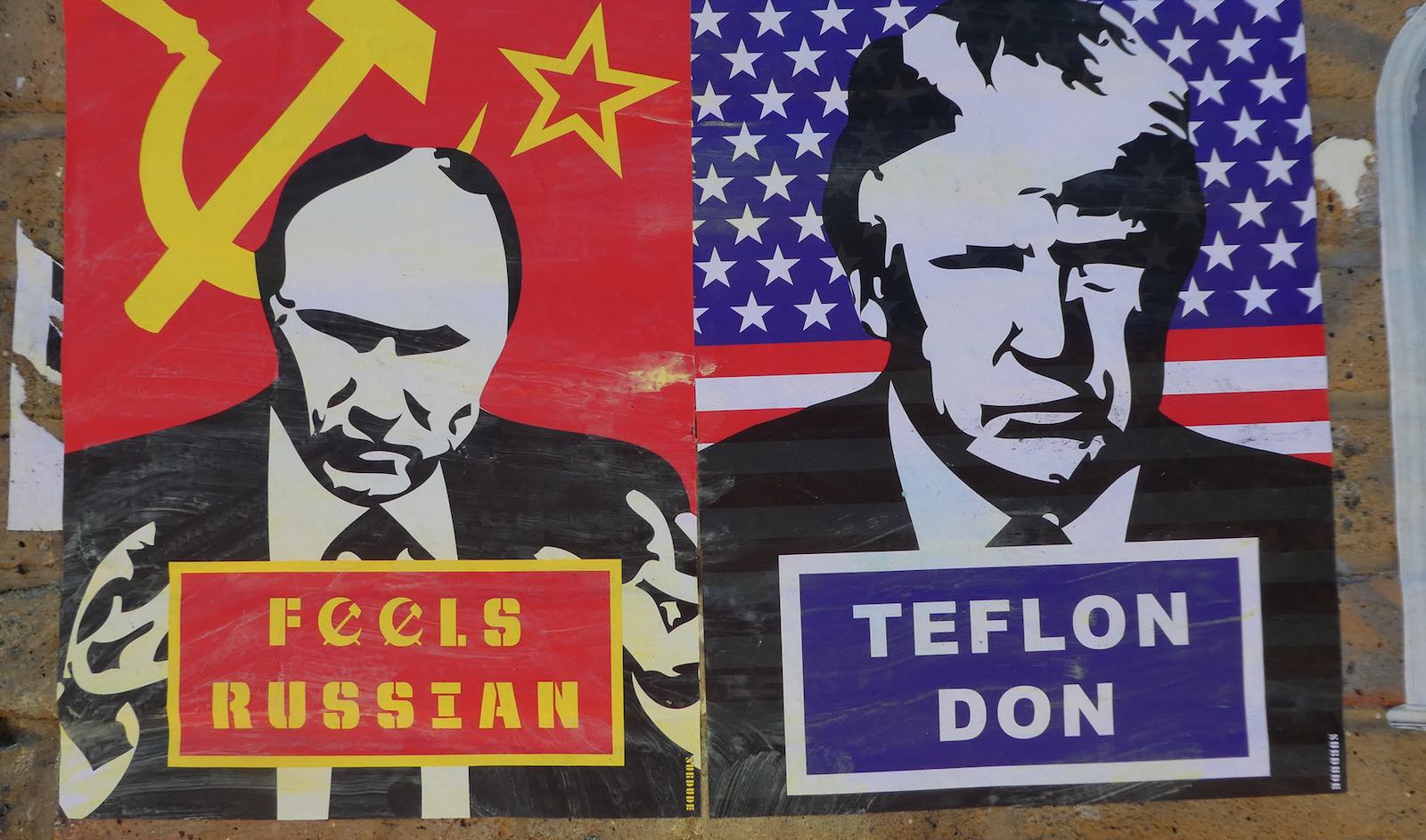 On 8 November 2016 a combination of the American constitution and vox populi – with perhaps a little help from elsewhere – placed enough power in the hands of a roué real-estate tycoon to affect the lives of every one of the 7.6 billion individuals on planet Earth.

Events and trends since summon to mind a wistful remark made three decades ago by a seasoned intelligence analyst. By 1988, the policies of the last General Secretary of the Soviet Communist Party, Mikhail Gorbachev – labelled “perestroika” (radical reform) and “new thinking in foreign policy” – were eroding the certitudes of forty years of Cold War confrontation. Wandering the corridors of the Australian Government’s Office of National Assessments, the analyst, notorious for hidebound views, was heard to mutter:

life was so much easier when I knew what I thought …

US President Donald Trump’s primary vow to the US public is to “Make America Great Again”. It has emerged that this resurrection is to be achieved by enacting policies that could have been designed by Vladimir Putin’s Russia.

Trump is fomenting a “trade war” against countries with which the US has a trade deficit, or which have allegedly stolen US intellectual property. He is dismantling the system of US alliances, including an “obsolete” NATO, splintering the EU, now designated a “foe”.

All this amounts to an assault on the constitutional and political order. Trump may actually believe that these policies will again make the US great; Putin seems confident that they will hasten America’s decline.

Trump’s demand to the former Director of the FBI, James Comey, as reported by Comey, that “I expect loyalty”, suggests he has also adopted elements of Putin’s approach to rule: surround oneself with a cluster of trusties – in Trump’s case, family members. Like Putin, Trump employs provocative, crude rhetoric and, routinely, arrant falsehoods. And like Putin, Trump springs tactical surprises to confound the foes and establish the principle that personal loyalty to the leader outweighs any perception of the national interest.

Perhaps nothing illustrates Trump’s instincts and agenda so graphically as the recent spectacle at the Finnish President’s palace in Helsinki, as modest a building as the scenes it witnessed were, in geopolitical terms, baroque. Most noteworthy of all was that two hours of the proceedings took place with only interpreters present. They are sworn to secrecy – and, in the Russian case, would know the consequences of indiscretion – so unless Putin or Trump provides us with a briefing, we can’t know what was agreed.

But thanks to a most unusual leak from a meeting of Russia’s ambassadors addressed by Putin in Moscow, we learned that he proposed to Trump that together they decide the fate of Ukraine and its 44 million inhabitants.

Putin reportedly proffered a referendum, “under UN auspices”, in the two Ukrainian provinces controlled by Russian forces. As these territories have been de facto parts of Russia for four years, Putin could reasonably be confident of the outcome of any such vote.

This proposal would presumably cause no difficulty to the school of “neo-realists” in international relations, strongly represented in the US and with entrée to the White House, that holds Russia has legitimate security interests that equate to rights, and therefore has a natural right to some degree of control over the countries on its western border that have historically formed part of a cordon sanitaire.

Some reactions to the meeting in Helsinki by the claque that is the Russian Duma (parliament) have been revealing, suggesting that for them it was final proof of Putin’s feat of re-endowing Russia with the full plenitude of “greatness”, seen as synonymous with equal status with and victory over the US “elite” and those of US allies.

“The summit in Helsinki has attracted the attention of the entire world. It is crystal clear to everyone: Russia and the US decide the fate of the world” (my emphasis). This was tweeted by Alexey Pushkov, once a born-again pro-Western democrat but now, like many others of that stamp, an aggressive Westernophobe.

The whole world (now) understands that it’s impossible [to get] anywhere without Russia. Honour and praise to Vladimir Putin for his ability to strengthen Russia’s international standing, so the Americans and the EU are forced to come to Russia.

Cartoonists delighted in the moment.

And this was the conclusion from Former Kremlin foreign policy adviser Sergey Karaganov, a self-designated intellectual often deployed to influence foreign academics:

The defeated American and European political elites hate Trump fiercely as a symbol of their defeat. Currently, chances are almost nil that Trump will be able to overcome this deeply rooted Russophobia.

Similar sentiments can be heard in the Australian media. When a US president’s policies are indistinguishable from those of the successors of the KGB, and opposition to them is equated with Russophobia, the world is indeed being turned upside down.

For any who may feel downcast by the Trump phenomenon, perhaps some light relief may be in order:

If Russians could sing ditties like that regularly on Russian-state television, Putin might not be rated the second greatest man of all time by his compatriots.