One group hoping for the return of sanctions on Iran are the smugglers of Musandam, across the Strait of Hormuz.

In 2017 the waters of the Persian Gulf are still choppy. There is US President Donald Trump's choice to decertify the Iran nuclear deal, Iran's bluster under President Hassan Rouhani and ongoing US efforts to end the dispute between several Gulf states and Qatar.

One group of entrepreneurs hoping their position will be strengthened by regional turbulence and economic sanctions against Iran are the smugglers of Musandam, which have made the most of their location by supplying imported goods to Iran before sanctions began to be lifted in the wake of the 2015 nuclear agreement.

Sparsely populated, remote and economically underdeveloped, the exclave of Musandam is one of eleven governorates of the Sultanate of Oman. The Musandam peninsula juts into the Strait of Hormuz that separates the Sea of Oman (on the right in the 2008 photograph below from NASA) from the Persian Gulf (on the left). 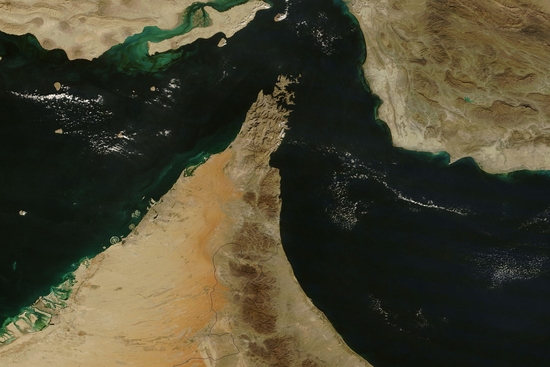 It affords joint control with Iran over the Strait of Hormuz, 34km wide at its narrowest point. In 2015, 30% of all seaborne-traded crude oil and other liquids transited the Strait.

Hidden behind rugged mountain ranges, land access to this area was traditionally limited. Until the 2008 opening of a weekly ferry service from Muscat to Musandam and road construction over the last two decades, much of the territory was only accessible by offroad vehicles. The weekly ferry service can still fail to reach the Governorate's capital of Khasab as a result of storms in the Sea of Oman, as I experienced in early 2017. 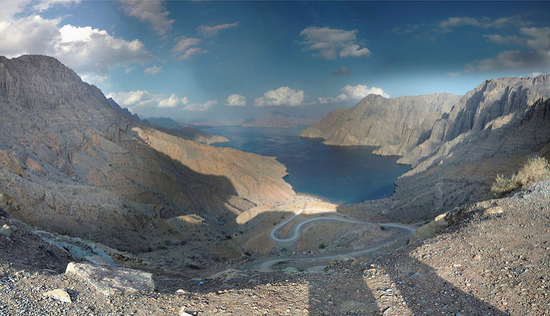 Its remoteness notwithstanding, the strategic location and maritime outlook have brought a range of foreign powers to this coast over time. For hundreds of years, Musandam was part of the Persian world during the Achaemenid and Sassanid empires. As such, the Persian language of Kumzari can be found in small numbers on either side of the strait, and in the earthquake-prone mountains of southwest Iran. In more recent centuries, at the height of its maritime power Portugal controlled ports in Oman for around 150 years, before being ejected from their fortification at Khasab and from Muscat in 1650. Two centuries later, a British attempt to build and sustain a submarine telegraph cable linking Karachi and London saw the construction of a telegraph repeater station within a mile of the old Portuguese fort. Thanks to the monotony, local attacks and some of the highest minimum temperatures on the planet, many soldiers stationed at Musandam were said to have gone insane during their postings.

Notwithstanding this inauspicious footnote, the region's maritime outlook continued with the unexpected impetus of the 1979 Islamic Revolution that transformed Iran from the West's favoured regional partner to its bête noire. The Islamic Republic's inability to meet its large and varied import requirements due to sanctions created a voracious need for alternative channels. 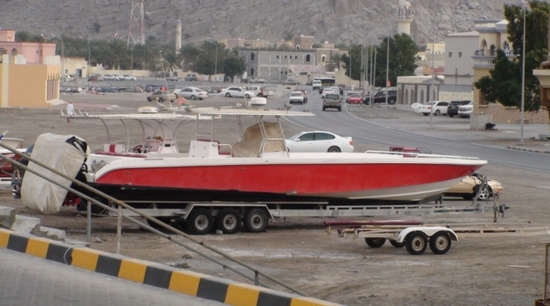 Oman, by dint of a resolutely neutral approach towards Iran and as a result of Musandam's geographic location between Iran and the consumer paradise of the United Arab Emirates, was ideally placed. As a result, in recent years one-third of imported goods in Iran are estimated to have been smuggled across the Strait of Hormuz. Musandam, in turn, has attracted young and brash entrepreneurs from Oman, Iran and across the region, and has become the centre of a vibrant smuggling economy that supplies cigarettes, cars and a host of other goods to Iran.

On the return journey too, cargoes such as uneasy goats fill the boats, particularly during seasonal celebrations such as Eid al-Adha. The puzzled bleats of sheep and the raucous din of small trucks reverberate off the rocky mountain sides when they land for transport to sale and slaughter in small coastal towns or nearby emirates such as Ras al-Khaimah. More covertly, drugs and, in a faint echo of Oman's history as a slave hub, undocumented migrants also arrive here.

The value of Oman's neutrality, most recently demonstrated by its facilitation of the 2015 Iran nuclear deal, may be one reason why this well-known trade is not questioned at regional or international levels – Iran is the only party which now seeks to prevent it.

While the trade has been somewhat formalised and taxed by Oman, it occurs in a grey zone that requires the payment of bribes on the Iranian side. Light yet powerful speedboats give the smugglers a chance of avoiding Iranian authorities and allow for multiple return trips each day after flashing out of Musandam's fjords and through the congested strait.

Young entrepreneurs freely detail their supply pipeline from the UAE to warehouses around Khasab and across the Strait. However, they also note levies on trucks departing the UAE, Omani taxes, bribes to Iranian officials, falling Iranian demand (due to improving Iranian supplies of various goods) and the easing of sanctions after the 2015 Iran nuclear deal as business impediments. The prospective return of sanctions would give some here hope that better days for Musandam's smugglers may yet lie ahead.

Photos from NASA, Flickr users Panoramas and Phil Norton, and the author.

The movement is clearly capable of violence yet proved divided and poorly trained. But campaigning is another matter.
Michael Heazle 8 Jul 2019 12:00

More plastic waste is choking the world’s oceans yet despite global declarations and commitments, nothing much is done.
Stephen Grenville 8 Apr 2019 11:30