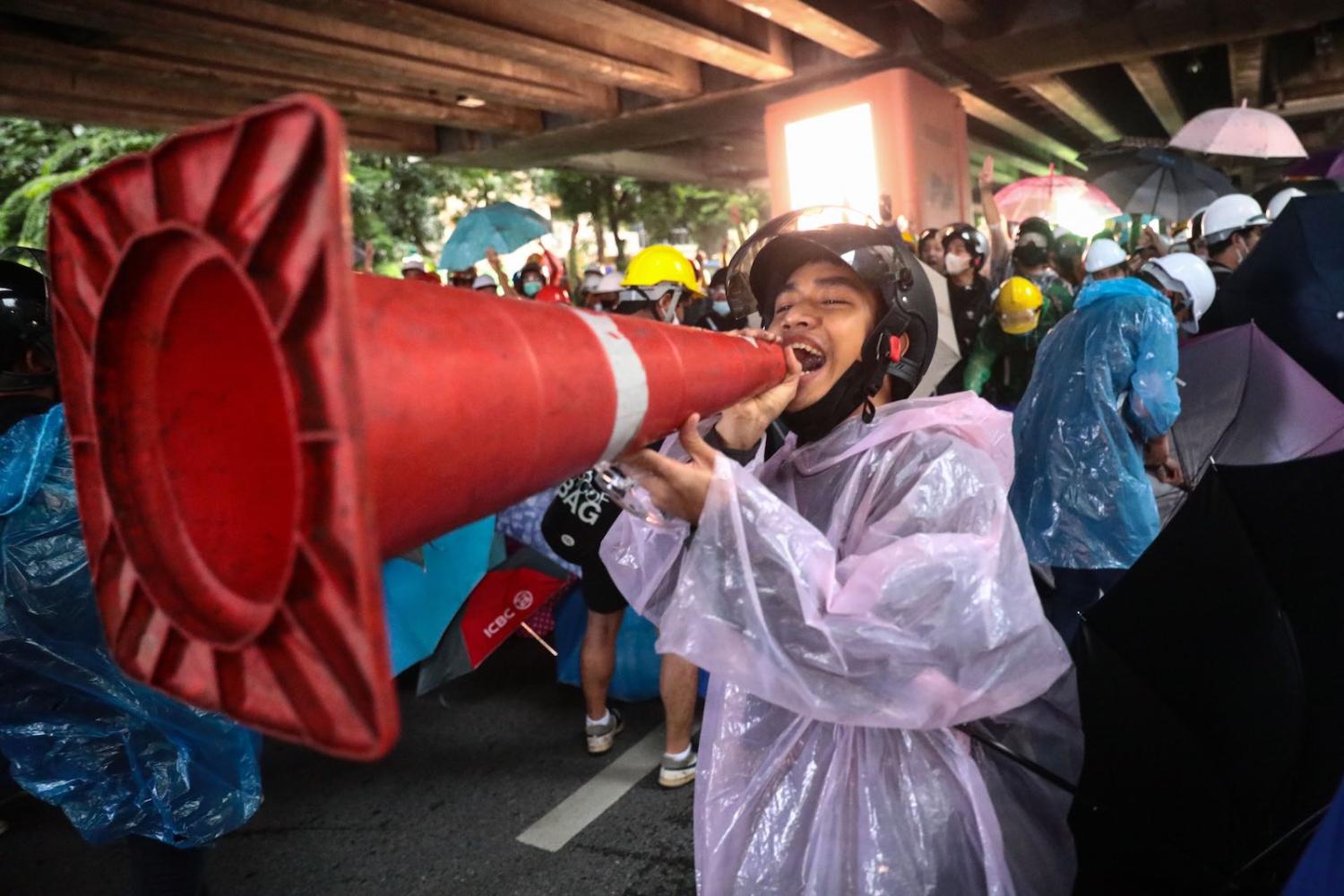 A pro-democracy protestor at a rally in Bangkok, 18 October 2020 (Jack Taylor/AFP via Getty Images)
Published 28 Oct 2020

At the heart of Thai street protests is the country’s inability to agree how power should be gained and used. What we are witnessing is a break from the past. The new king is more assertive than his father. And the junta’s five-year enforced hiatus in politicking has given rise to a new generation of activists free from the baggage of their sometimes violent predecessors.

Thousands of protesters, led by university students, have been demanding political changes, including revisions to the constitution that Prime Minister (and former junta leader) Prayuth Chan-ocha orchestrated after his 2014 coup, an end to military influence in politics and his government’s resignation. They have also decried injustices in the legal system and unexplained disappearances of regime opponents.

Unlike in earlier protests, some protesters also want palace reforms, including ending royal endorsement of coups and use of extralegal authority, and reining in the crown’s burgeoning cost to taxpayers. One leader called it a demand for “equality”. Also notable is the absence of the violence that often marked large protests between 2008 and 2014.

Much of the problem flows from Thailand’s incomplete transition to democracy after the People’s Party’s bloodless 1932 coup ended the absolute monarchy.

These student protests – the biggest in recent years – would probably not have been so well supported had the country not been in a Covid-19–driven economic slump. So, it’s unlikely to be a coincidence that the government announced a new graduate employment subsidy program just two days after the 19 September protest.

But the subsidy doesn’t address the protests’ underlying cause: disagreement on how power is gained and used. Partly, this is due to the unwillingness of those with power to relinquish it.

Student demands for equality also challenge traditional social hierarchy mores and the long-standing willingness by many Thais to condone the extralegal use of power. It will take many years to change these well-ingrained attitudes.

Power … and the people

Much of the problem flows from Thailand’s incomplete transition to democracy after the People’s Party’s bloodless 1932 coup ended the absolute monarchy. The People’s Party initially kept power for itself, outlawing rival parties, worried royalists would use them to regain power. Thais had to wait 14 years for a fully elected legislature and alternative political parties.

The leader of the People’s Party’s military faction, the anti-royalist Plaek Phibunsongkhram (“Phibun”) reversed the move to democracy. He created a dictatorship, then later established his own political party, buying off and coercing popular politicians to join him and manipulating polling. Phibun and his brothers-in-arms believed the military was Thailand’s pre-eminent institution and, as such, had the right to intervene in crises, including by removing “bad” governments.

Phibun’s justification and means of gaining power set a precedent for subsequent military leaders. In the 88 years since 1932, Thailand has only had 24 years of elected prime ministers, but 60 years of serving or retired senior military officers heading the government – 19 coups (of which, 11 succeeded) and 19 new constitutions.

It was not until General Sarit Thanarat seized power in 1957 that the monarchy’s fortunes began to revive. Sarit was the first coup leader to see an alliance with the palace could help legitimise his authority. He raised the king’s profile, deepened his ties with the military and increased substantially the palace budget. Sarit’s rule was marked by his personal involvement in summary executions and corruption. Nevertheless, on his death, the current king’s father, Bhumibol, gave him honours unparalleled for a commoner, including 21 days of mourning in the palace, and having Sarit’s body placed in a gold urn under a royal five-tier umbrella.

Over time, the palace’s promotion of the image of King Bhumibol’s benevolence, virtuosity and centrality to Thai identity ensured he became the pre-eminent figure in a polity otherwise noted for its ephemeral cast of military leaders and a revolving door of often-corrupt politicians.

King Bhumibol enhanced his reputation further with two well-publicised interventions seen by many as supporting the people against military excesses. In 1973, he sided with student protesters demanding a new constitution to one the military government had torn up. And, in 1992, he was televised telling the prime minister and a protest leader to end violence after troops killed at least 40 demonstrators opposing yet another general taking the reins of government in dubious circumstances.

But, in April 2006, King Bhumibol made a fateful decision. An election boycott by three parties opposed to the electorally popular Prime Minister Thaksin Shinawatra left many seats unfilled. Rejecting calls for him to personally replace the prime minister, Bhumibol told courts to “solve the problem”. Previously, Thai courts hadn’t played a major political role. Now they had to fix a problem that neither parliament nor the palace was able or willing to solve. Judges felt a particular obligation to act. Unlike other Thai public servants, they swear an oath of loyalty before the king, and many feel a special connection to the monarch.

The youthful protesters have, so far, renounced the violence of “yellow shirt” and “red shirt” protests over the past two decades.

They moved quickly. In May, the Constitutional Court ruled the election void. Over the next 13 years, courts would dissolve three parties controlled by the family of the now self-exiled Thaksin and dismiss two of their leaders.

During this period, many “red shirts” – the United Front of Democracy Against Dictatorship, formed when Thaksin supporters joined with several pro-democracy groups in 2007 – felt they were the victims of “double standards”, as the politicians they elected were removed through coups or legal measures, unlike their opponents. They repeatedly took to the streets in large numbers, leading to violence that claimed hundreds of casualties.

Prayuth followed Phibun’s methods to hold on to power. His allies established a new party, Pracharath, in 2018, drawing in politicians from other parties, reportedly offering money and government positions. A junta-appointed National Legislative Assembly chose the members of the Election Commission which, several weeks after a close 2019 general election, determined who got the “party list” seats the junta party coalition needed for a narrow 254–246 majority.

Also following precedent, in February this year the opposition Future Forward Party was dissolved after it was judged to have violated election laws when the court held that a loan from its founder should be regarded as a donation.

Prayuth also bent the law to cater to the new king’s wishes. In 2017, he changed the draft constitution so King Vajiralongkorn could reign from outside Thailand. This required rewriting an existing law as, at the time, it was illegal to change the final draft. In 2019, Prayuth and his ministers swore incomplete oaths of office, professing loyalty to the king, but not to uphold the constitution. Although this was challenged by opposition parliamentarians, the king’s view was not in doubt, and the matter was dropped. And in October 2019, the government went outside normal parliamentary processes to put key army units under the king’s direct control.

By holding on to power for so long and preventing overt politicking, the junta inadvertently helped create a new politically aware cohort free from the baggage of past political groups. Founded in 2018 by a former student activist from a wealthy family, the now-disbanded Future Forward Party brought into mainstream politics many prominent academics, pro-democracy activists and representatives of marginalised groups. Its surprise showing in 2019’s general elections – it came third, with 81 seats – shows many Thais want change.

The youthful protesters have also, so far, renounced the violence of “yellow shirt” and “red shirt” protests over the past two decades. And although some intimidate those not expressing support for their cause, this is not yet common.

But many Thais still appear comfortable within the traditional social hierarchy, and tolerate the misuse of power. Polling from 2007 to 2013 showed two-thirds of respondents accept corrupt government, if they also benefit. And neither “red shirts” nor “yellow shirts” are troubled by their associations, respectively, with Thaksin or with Suthep Thaugsuban, both of whom were tainted by scandal when in office.

Unless these attitudes change, and until Thailand has robust, effective and transparent means of ensuring its elected officials will honestly perform their duties, it will continue to be plagued by corrupt leaders, and by those who will attempt to seize power using this corruption as an excuse.

Issues-focussed, clean-skin politicians like those of Future Forward and today’s youthful protesters are cause for optimism. But attitudinal change across society will take many years. The question is: will today’s youth persevere with their ideals, or will they be captured by old-style politics as they age? 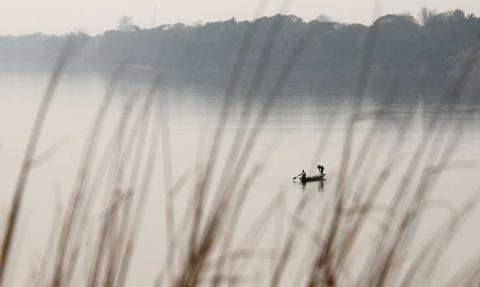