Doubts over legality and intelligence (and impeachment) didn't keep the US president from claiming a big win. 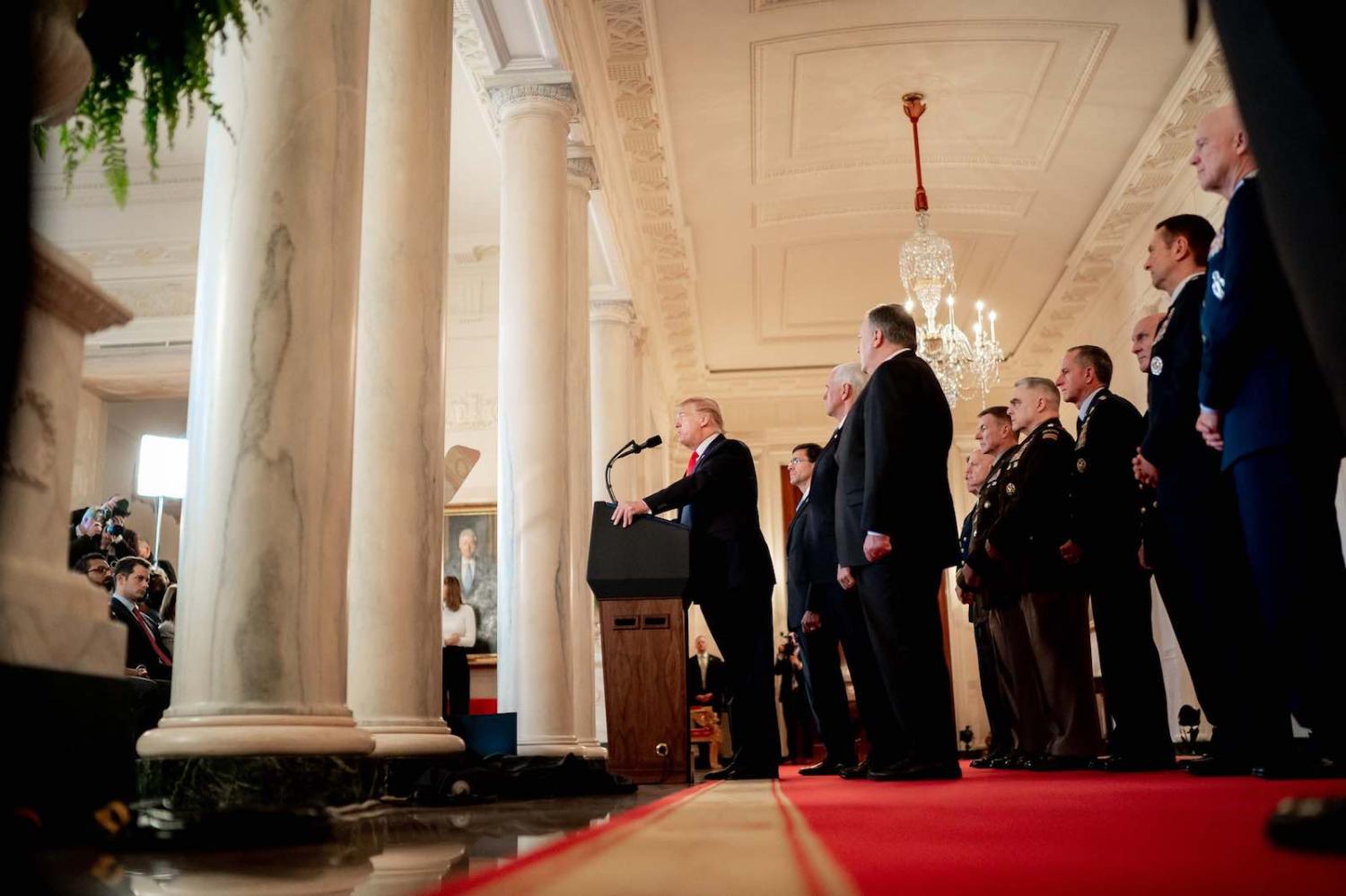 The US drone strike that killed Iranian General Qasem Soleimani dominated the political discussion in Washington last week. President Trump’s decision to target Soleimani – an escalatory move in the ongoing confrontation with Iran – was an unexpected development.

The conventional wisdom was that Trump’s domestic political challenges largely constrained his foreign policy choices. Trump had resisted prior calls to respond forcefully to Iranian provocations, including calling off a retaliatory air strike at the last minute in June. Trump’s controversial withdrawal in October of the majority of US forces from Syria underscored his commitment to his campaign promise to end the “forever wars” in the Middle East.

It seemed reasonable at the beginning of last week, therefore, to question whether in the case of Soleimani the conventional wisdom on Trump was wrong.

As illustrated by the impeachment clause, the possibility of an American president behaving like a monarch was anticipated by the Constitution’s framers. A president acting without an effective check on his power was not.

The Trump administration’s initial messaging on the strike was muddled, but some members of Trump’s national security team were new and inexperienced, so it seemed possible the justification would be clarified over time.

Further, the Trump Administration had designated the Islamic Revolutionary Guard Corps (IRGC) as a Foreign Terrorist Organization (FTO) under US law last year. This was an unprecedented move. Since the law’s creation in 1997, the FTO designation had been applied only to non-state actors. Did this departure suggest some element of forethought or preparation for a legitimate strike?

In an interview with a reporter from Foreign Policy on the day Soleimani was killed, retired General David Petraeus appeared to support the strike by emphasising the need to re-establish deterrence in the region. Was it possible that these comments reflected a change in the position of current US senior military leadership in light of some new intelligence or analysis?

Over the course of the week, it became clear that the conventional wisdom on Trump was fairly accurate. Reporting on the dynamics leading up to and following the strike revealed a known quantity.

The administration’s messaging around the justification did not improve – or even settle on one approach. Officials talked about “imminence” and “deterrence”, traditional self-defence and existing congressional authorizations for the use of military force. Democrats were unimpressed with the intelligence briefing administration officials provided – after the fact – to Congress. In a notable breaking of ranks, Republican Senators Mike Lee and Rand Paul, long-time opponents of foreign intervention, referred to the briefing as “insulting and demeaning.”

Legal experts broadly agree that designating the IRGC as an FTO provided no additional legal cover for a targeted killing, on the basis that only the most aggressive interpretation of existing statutory authorities could justify the strike on Soleimani.

Follow-up reporting, based on discussions with Trump administration officials, suggested that the President, still smarting from charges of weakness in the face of prior Iranian provocations, ordered the strike impulsively after watching Iranian-backed protesters attacking the US Embassy in Baghdad. The protesters reminded him of both the 1979 hostage crisis and the 2012 Benghazi attacks, which he viewed as disgraceful episodes for US political leadership.

When Iran bombed two US bases in Iraq five days after the strike on Solemaini, there was limited damage, with no American casualties reported.

In a speech to the American public, Trump claimed victory for ridding the world of a bad actor, at no meaningful cost.

The short-term political victory appeared to satisfy the American president. It would surely appeal to his base of supporters and the hawkish members of the Senate, who had been angered by the Syria pull-out – and who would soon be acting as jurors in his forthcoming impeachment trial.

Trump’s decision to launch military attacks while impeachment proceedings loomed was reminiscent of President Bill Clinton’s 1998 decision to launch air strikes in Afghanistan and Sudan during his own impeachment ordeal. Clinton missed the target in Afghanistan – Osama bin Laden – and the “nerve gas” factory in Khartoum turned out to be a pharmaceutical plant. Clinton was accused of using military action to distract the public from his trial.

Some lawmakers on the left, including Democratic presidential candidate Elizabeth Warren, have accused Trump of the same behaviour, but the charge carries less weight than it did with Clinton – in part because Trump’s impulse to put of his own interest over the national interest has become something of a given during the past three-plus years.

While Trump’s behaviour was hardly surprising, follow-up accounts suggest that the intelligence community’s perception of the threat posed by Soleimani and associated militia groups had shifted in recent months.

Senior military leaders reportedly did not push for the strike against Solemaini, but at the same time, there is some sense to the notion, in the absence of actual proof, that their resistance may have been moderated by bitterness towards Soleimani among those who fought in Iraq. But CIA Director Gina Haspel, persuaded by intelligence on Soleimani’s efforts to organise proxy forces to remove US forces from the region, did argue in favor of the strike. She also accurately predicted Iran’s measured response to Soleimani’s killing.

The Washington Post confirmed that a second strike, authorised around the same time as the Soleimani strike, was carried out unsuccessfully against a top Iranian military official in Yemen. The news of this additional strike further undermined the Trump administration’s assertion that Soleimani represented an imminent threat to the US, for which it claimed “exquisite” intelligence. It also suggests deep concerns about a coordinated effort among US adversaries in the region.

The threat remains, but tensions have been lowered for the moment. Many of Trump’s critics will focus on how considerations that would have prevented former presidents from taking action against Soleimani – the vulnerabilities of US allies in the region, rules against the targeted assassination of foreign government officials, and unpredictable second- and third-order effects – are meaningless to Trump.

But this is also a moment to acknowledge the consequences of Congress’s decades-long abdication of its powers in war-making.

As illustrated by the impeachment clause, the possibility of an American president behaving like a monarch was anticipated by the Constitution’s framers. A president acting without an effective check on his power was not.

Previous Article
Australia’s new strategic geography
Next Article
India has left RCEP behind, but not its ambition in Southeast Asia

Russia’s belligerence in Ukraine gave the US an opportunity to constrain Russia’s economy and its economic expansion across Eurasia.
Robert E Kelly 3 Oct 2017 17:17

Unfortunately, the South cannot escape the North’s shadow. When the North falls apart, the world will look to South Korea to clean up the mess.