Washington has signalled a desire for closer ties with New Delhi, but major challenges are yet to be answered. 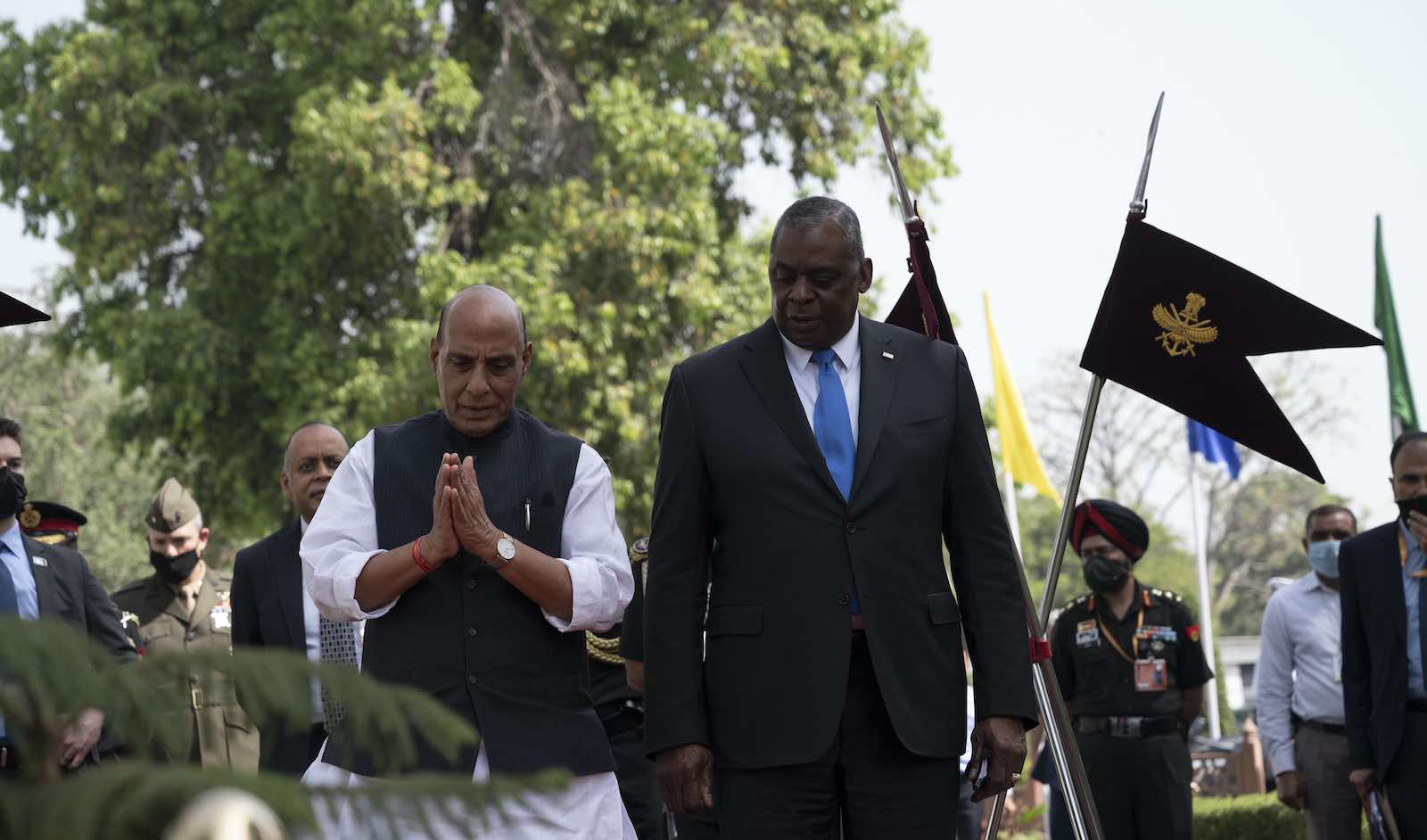 US Defense Secretary Lloyd Austin’s recent visit to New Delhi was a chance for the United States and India to discuss the nature and depth of their strategic partnership – particularly against the backdrop of tensions with an aggressive China.

Austin visited New Delhi soon after leaders of the “Quad” – the Quadrilateral Security Dialogue involving Australia, India, Japan and the US – pledged to promote a “free, open, rules-based order, rooted in international law to advance security and prosperity and counter threats to both in the Indo-Pacific and beyond”. An editorial in China’s state-steered Global Times scoffed at the intentions of the Quad. Yet Austin’s official travels clearly reflected the Biden administration’s wish to strengthen ties with America’s partners and allies, having arrived in New Delhi via the US Indo-Pacific Command headquarters in Hawaii and a trip to treaty allies Japan and South Korea.

Austin’s trip to India did leave unanswered several big questions about the closeness of US-India ties. The US sees India as a major defence partner, thanks to converging strategic interests, and Washington wants to “encourage India’s leading role” in the Indo-Pacific region. In New Delhi, Prime Minister Narendra Modi stressed the importance of bilateral defence cooperation.

Some of Austin’s statements in India did appear surprising. If, as he said at a press conference, India and China were “never” on the verge of war during the violent stand-off in eastern Ladakh last year, why did former president Donald Trump offer to mediate between the two countries? And why has China’s aggressiveness in South and Southeast Asia helped drive India towards closer strategic collaboration with other Quad member states? Was Austin downplaying the seriousness of the confrontation with China, or does he not fully grasp the challenge?

The US and India are undoubtedly drawing closer. This is not just a recent change, with the two countries in fact signing four major security pacts since 2002, including on logistics to allow each country’s military to use bases for repair and replenishment, communications, and for the sharing and sale of sophisticated American military technology to India. The Bush administration in the 2000s also moved to normalise civil nuclear cooperation with India.

Nevertheless, India’s decision in 2018 to buy Russia’s S-400 missile has created tension between New Delhi and Washington. Austin highlighted America’s wish that its allies and partners move away from Russian acquisitions which, as he put it, would “trigger sanctions on our behalf”. The US Countering America’s Adversaries Through Sanctions Act (CAATSA) restricts defence purchases from Russia, Iran and North Korea. Yet the issue of sanctions was not discussed during Austin’s visit, because India has yet to acquire the S-400. CAATSA remains an elephant in the room, and the Biden administration – as with the Trump administration before it – has not ruled out imposing sanctions on India if it goes ahead with the deal.

India counters that the acquisition of the S-400 missiles was on its agenda before the US introduced CAATSA, and that its military has a diversified portfolio. Russia is its top arms supplier, but it also buys weapons from the US, Israel and France.

What is clear is the incongruity of India’s military dependence on Russia as well as the US in defending against China.

This leaves open a question for Washington: while discouraging New Delhi from buying the S-400, should the US offer an alternative that would provide India with the same capability against China? India should remember that Russia started delivering the same missile to China in 2018, while delivery to India is expected to start in December. Both countries could wind up hitting each other with the same Russian missile.

The other unanswered question is whether US-India cooperation against China could be affected as New Delhi seeks to buy the S-400 from Moscow and jointly manufacture arms for export with Russia. India must work its way through the tangle of conflicting interests created by America’s hostility towards Russia and China on one side, and how it responds to the joint challenge to the global primacy of the US, as well as China’s threat to its territorial integrity.

What is clear is the incongruity of India’s military dependence on Russia as well as the US in defending against China. The closeness of the Sino-Russian comprehensive strategic partnership was obvious from the meeting between foreign ministers Sergey Lavrov and Wang Yi in the south-east Chinese city of Guilin, even as Austin held talks in New Delhi with Modi, Defence Minister Rajnath Singh, Foreign Minister Subrahmanyam Jaishankar and National Security Adviser Ajit Doval.

US-India ties are not without tensions. Austin’s statement that he had discussed human rights issues, particularly about citizenship for Muslim minorities in Assam, with Indian ministers (although notably not with Modi). New Delhi maintained a public silence on this aspect of the talks, along with Austin’s remark that the US values its partnership with India and partners “need to be able” to discuss such issues. During their election campaign, Joe Biden and his running mate, now Vice President Kamala Harris, criticised the Modi government’s suppression of human rights in the Muslim-majority region of Jammu and Kashmir and the Citizenship Amendment Act. Could the Biden administration’s strictures on such issues embolden Modi’s critics, while turning Indian public opinion against closer ties with Washington?

Also, if America’s wish for closer defence ties with India is challenged by what Washington may see as India’s illiberal domestic policies, could the US itself come to question the nature of its “closeness” to strategically important India?

Show Comments
Previous Article
In India, a taste of political variety
Next Article
An interim government would bring ruin to Afghanistan