The World Health Organization has been heavily criticised for appeasing China instead of leading the Covid-19 fight. 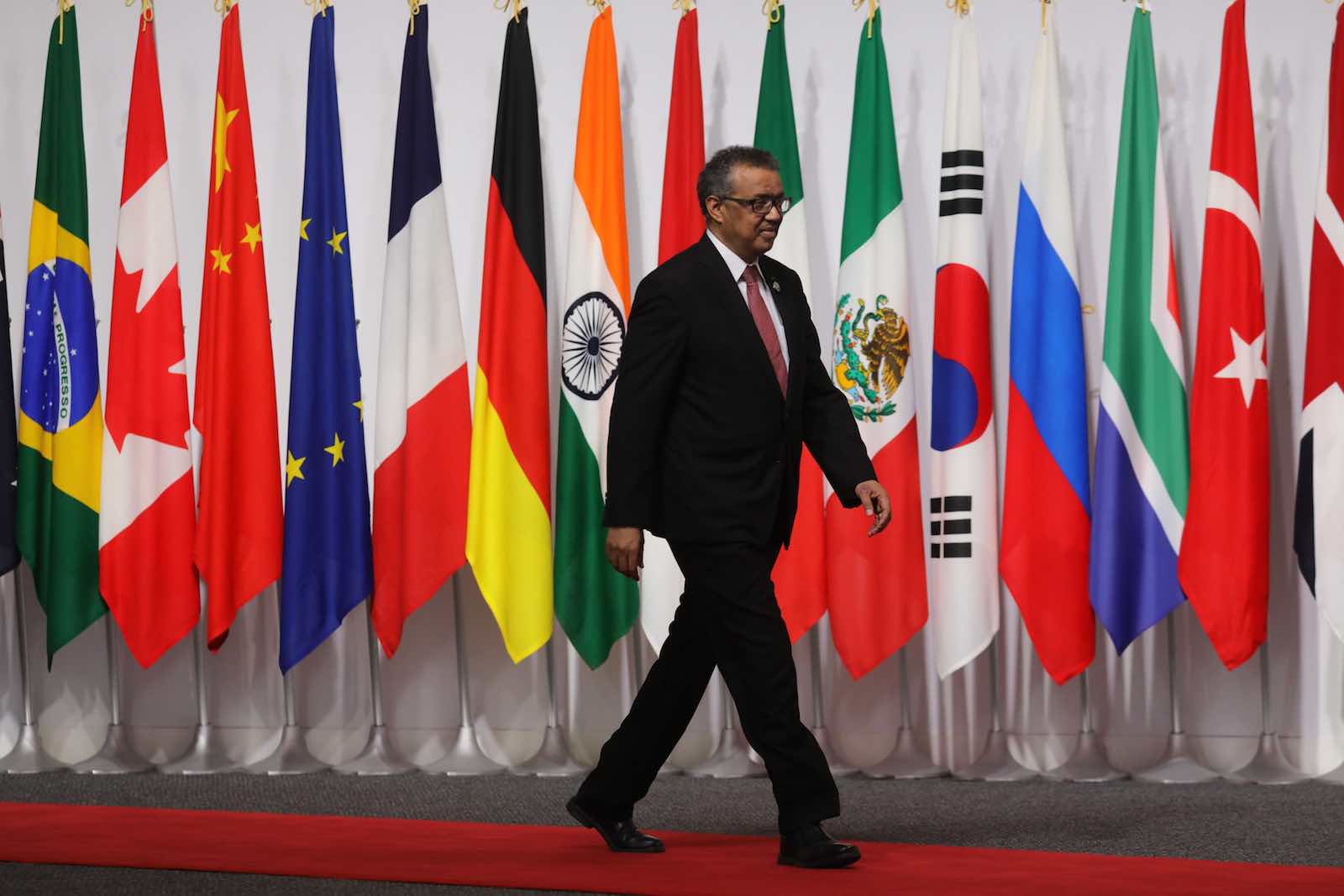 This should be the greatest hour for the World Health Organisation, the UN’s Geneva-based body dedicated to fighting just such a global threat as Covid-19.

Instead, WHO is struggling to defend its own credibility – while the impact of the contortions into which it has forced itself by adhering to the People’s Republic of China’s strict shunning of Taiwan has also dragged those questioning it into the firing line.

National governments and health experts around the world are determining the strategies for combatting the pandemic, with polite nods as needed to WHO, but without crucial input from the global body.

To an extent, this is inevitable, given the speed of the spread of the virus, and the urgent requirement to act locally superseding the perceived value of thinking globally.

The PRC has succeeded in leveraging its capacity to influence the WHO – and other such organisations – considerably in excess of its financial contribution, a testimony to its more concerted and focused approach to multilateral affairs under Xi.

But WHO has also diminished its own potential role as a result of its politicisation.

The General Secretary of the Chinese Communist Party, Xi Jinping, told the 2017 national party congress that “reforming and developing the global governance system” is a major foreign-policy priority, in accord with Xi’s hallmark phrase about “building a community with a shared future for mankind”. China has accordingly especially relished and highlighted the applause its governance receives from international multilateral agencies, including the WHO.

The WHO’s Director-General Tedros Ghebreyesus, formerly Ethiopia’s Health Minister and Foreign Minister, who trained as an epidemiologist but is not a medical doctor, thanked the PRC for its “transparency” over the spread of Covid-19 (despite the month-long delay in responding, and the coverup that included the punishment of whistle-blower doctors) and heaped particular praise on Xi after their meeting in Beijing’s Great Hall of the People on 28 January, including for his “detailed knowledge of the outbreak”.

Tedros said that the PRC was “setting a new standard for outbreak control” and commended it for its “openness to sharing information” about the virus. China’s harsh measures in the epicentre, Wuhan, provided a “window of opportunity” for the world to counter the virus, he said.

Indicatively, the organisation last year endorsed traditional Chinese medicines that are unproven scientifically, including them on its official list of remedies, following extensive lobbying from Beijing.

Washington Post columnist Frida Ghitis wrote in 2017 of Tedros’s campaign to become director-general – which succeeded in May that year – that PRC diplomats had “worked tirelessly behind the scenes to help Tedros defeat the UK candidate, David Nabarro”. The article lamented Tedros’s subsequent move to appoint Zimbabwe’s President Robert Mugabe as a Goodwill Ambassador for the WHO – a plan that was rescinded following an international outcry.

After Australia and other countries blocked travel from China as Covid-19 exploded there, Tedros said on 3 February: “There is no reason for measures that unnecessarily interfere with international travel and trade. We call on all countries to implement decisions that are evidence-based and consistent.”

The WHO’s politicisation has become especially manifest in its treatment of Taiwan – whose population is about the same as Australia’s – as a Chinese province, as the PRC demands, refusing to communicate directly with its government even over such a serious challenge as Covid-19, and banning it from attending meetings even as an observer.

When Ma Ying-jeou, leader of the Kuomintang (Nationalist) Party, was president in Taiwan, he succeeded in persuading the People’s Republic of China to withdraw its opposition to Taiwan gaining observer status in the World Health Assembly (WHA), the governing body of the WHO, under the name “Chinese Taipei”. Xi eventually met Ma at a historic summit in Singapore in 2015.

But after Taiwan had been for six years an observer of the WHA – which elects the WHO director-general every five years – the PRC changed its attitude in 2016 following the landslide election of Democratic Progressive Party leader Tsai Ing-wen as president, and engineered its ousting from the assembly.

The subsequent WHO rejection of any contact with Taiwan was highlighted when its Assistant Director-General, Bruce Aylward, now Senior Advisor to the Director-General, declined to answer questions about Taiwan during a recent interview with Radio Television Hong Kong. Criticism of the organisation soared in Hong Kong, and in East Asia more widely.

The Canadian, who was co-leader of the joint WHO–People’s Republic of China team that analysed the pandemic in China and the response of Beijing, was asked by RTHK producer Yvonne Tong, “Will WHO reconsider Taiwan’s membership?” Aylward said he could not hear the question, and suggested moving to another. When Tong persisted, he appeared to hang up the call.

When RTHK called back, and Tong asked Aylward about how well Taiwan has done so far in containing the virus – 373 cases and five deaths by 7 April, despite the intensity of its relationships with the PRC, only 130 kilometres away – he said, “Well, we’ve already talked about China.”

He added, “When you look across all the different areas of China, they’ve all done quite an effective job…”

WHO’s categorisation of Taiwan – which is widely viewed as offering a valuable model of best practice in virus response – has shifted in recent months, from “Taiwan, China” to “Taipei” to “Taipei and its environs”.

But Edward Yau, the Commerce Minister of the Hong Kong Special Administrative Region, responded by accusing RTHK of breaching not only Beijing’s “One China” policy, but also “the purposes and mission of RTHK as a public service broadcaster as specified in its Charter”.

Yau said, “It is common knowledge that the WHO membership is based on sovereign states. RTHK, as a government department and a public service broadcaster, should have a proper understanding of the above without any deviation. As the Editor-in-chief of RTHK, the Director of Broadcasting [Leung Ka-wing] should be responsible for this.”

WHO’s categorisation of Taiwan – which is widely viewed as offering a valuable model of best practice in virus response – has shifted in recent months, from “Taiwan, China” to “Taipei” to “Taipei and its environs”.

Although Taiwan health officials had informed the WHO about human-to-human viral contamination on 31 December, the organisation declined to recognise this as a reality until 23 January, after the PRC had conceded this was happening. The WHO finally declared a pandemic on 11 March.

On 14 January, the WHO had officially tweeted: “Preliminary investigations conducted by the Chinese authorities have found no clear evidence of human-to-human transmission of the novel Covid-19 virus identified in Wuhan, China”. It appears that although the WHO had acknowledged receipt of the 31 December letter from Taiwan informing it about human-to-human contamination, it did not otherwise respond or share the information with WHO member states.

Taiwan, however, acted swiftly on that information from its experts and immediately started conducting health inspections on air passengers from Wuhan, and sent two virologists to the Chinese city to assess the situation for themselves. On the basis of their concerned report, tough measures were introduced on a national basis, well before most other parts of the world.

Francois Godement, former director of the European Council on Foreign Relations’ Asia and China Program, wrote for the Paris-based Institut Montaigne that “Taiwan’s status as a ‘Chinese province’ means its own information was officially ignored”. He also noted that “China’s initiatives in international crisis response of recent years generally do not go through the WHO”, but that such material aid tends to be delivered bilaterally instead.

Godement said that “during the current crisis, [Tedros] has defended his praise of Beijing by the need to obtain cooperation. Yet it took the WHO a month and a half – following China’s first report to the organisation of an ‘unknown illness’ and February 13 – to send a full expert mission on the ground in China, and with very limited access to Wuhan”.

Although WHO has come under fire, as have many multilateral organisations, from the Trump administration, overall American contributions to the organisation’s $6.3 billion annual budget – when those from US charities and individuals are included – have recently amounted to about 75% of the total.

The PRC has thus succeeded in leveraging its capacity to influence the WHO – and other such organisations – considerably in excess of its financial contribution, a testimony to its more concerted and focused approach to multilateral affairs under Xi, and in contrast with the fragmentation and fractiousness of the Trump-era American approach.

The WHO has been approached to respond concerning its position on Taiwan, and to criticisms of politicisation, but has not yet done so.

International organisations are governed by a bewildering variety of voting rules, but at the core of most, the majority decides – albeit with the caveat in some of a potential veto by founders, or powers with unchallengeable strength.

In much of the 20th century, imperial Britain then the US were able to use their diplomatic domination to translate their bilateral supremacy – as the greatest source of aid, or arms, or trade, or other core voting determinants – into multilateral influence. In the 21st century, it is the PRC that is proving most capable of translating its intense bilateral efforts into international impregnability.

Thus for instance, Amnesty International in its current country report summarises the PRC’s human rights record as “marked by a systematic crackdown on dissent”, its justice system “plagued by unfair trials and torture and other ill-treatment in detention, information on its extensive use of the death penalty still a state secret, and “particularly severe” repression “under the guise of ‘anti-separatism’ or ‘counter-terrorism’” in Xinjiang and Tibet. And Human Rights Watch executive director Kenneth Roth has said in a recent essay on “China’s Global Threat to Human Rights” that “China’s government sees human rights as an existential threat. Its reaction could pose an existential threat to the rights of people worldwide.”

In contrast, the UN Human Rights Council praised China last year for the progress it had made on human rights over the past five years and the positive role it has played in advancing the human rights cause.

Wilfred Chan concluded, for the American publication The Nation, that  “the WHO has never operated free from state interests”.

Like other international agencies founded under the UN in the wake of the Second World War, he wrote, the agency originated as a tool of the 20th century US-led world order, and he cited a 1954 speech made by Republican Representative Frances P. Bolton on the anniversary of the agency’s founding: “In our global struggle against communism, one of our principal endeavours is to keep the free world strong. Disease breeds poverty and poverty breeds further disease. International communism thrives on both.”