Bangladesh’s road to the BRI

Experience in Bangladesh shows how countries can mould engagement with China in ways that mitigate strategic concerns. 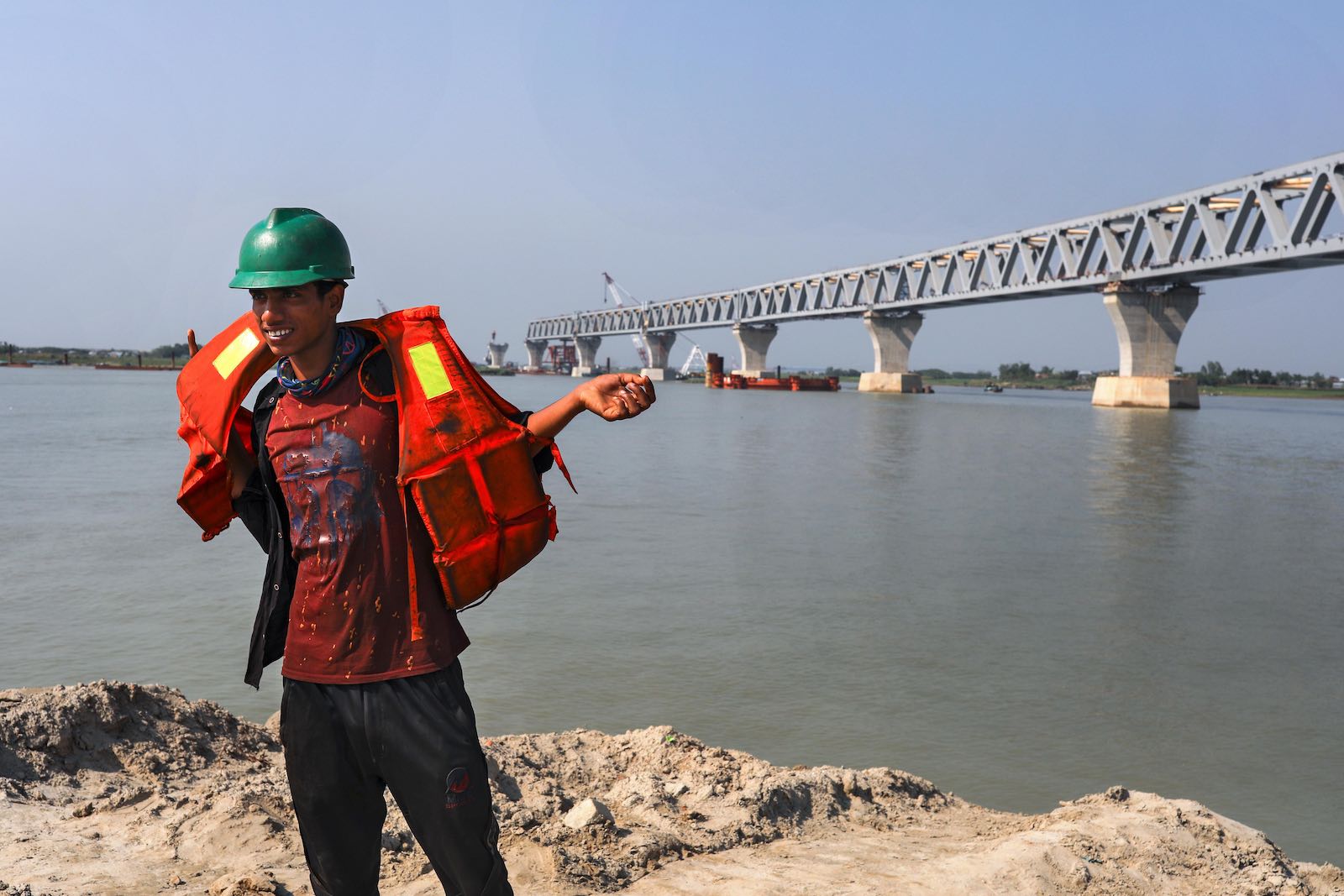 Padma Bridge project, a 6.15-kilometre bridge that will connect the south-west of Bangladesh to the northern and eastern regions (Photo: Kazi Salahuddin Razu via Getty)
Published 30 May 2019 06:00   0 Comments

There are a lot of different ways for the region to approach China’s Belt and Road Initiative (BRI). We should not assume that all BRI projects are necessarily one sided or economically unfeasible. Indeed, some countries have been better than others in maximising the benefits of BRI investment and minimising the potential downsides.

The experience in Bangladesh might show how countries can mould their engagement with China in ways mitigates strategic concerns. For some years Bangladesh has been quite successful in taking a balanced approach to the BRI that has helped it to maximise China’s strengths (e.g. in low-cost construction) while avoiding “debt traps” or strategic capture.

Long the global poster child of poverty, Bangladesh now has the fastest growing economy in Asia.

There are several reasons behind Bangladesh’s measured approach. One is the close political and security relationship between Sheikh Hasina’s government and India. This means that Bangladesh actively avoids Chinese projects that would cause problems for its huge neighbour.

Bangladesh has also been helped by a booming economy. Long the global poster child of poverty, Bangladesh now has the fastest growing economy in Asia. Growth is currently around 8-9% per annum, with average growth of more than 6% per annum for a decade. It may soon graduate to the status of a “middle income” country.

Bangladesh is also the subject of much investor interest from international agencies such as the Asian Development Bank, national aid agencies and private investors. JICA, Japan’s international aid agency, has long targeted Bangladesh through its “BIG-B” Bay of Bengal Industrial Growth Belt Strategy. (JICA has also been busy building infrastructure elsewhere in the Bay of Bengal.)

Bangladesh’s economic links with China are growing. China is the country’s top trading partner, although there is a strong imbalance in favour of China. Chinese direct investment in Bangladesh has also been growing in recent years, especially in the power sector.

Current BRI-branded projects in Bangladesh have a value of around US$10 billion. These include a massive 6.5 kilometre road/rail bridge over the massive Padma river (which will connect the two sides of the country for the first time), an industrial park in Chittagong, a road tunnel in the southeast, and Payra port. None of them are strategically controversial.

Bangladesh’s total external debt (owed to all lenders) of around US$33 billion seems to be manageable, and Bangladesh is currently considered as a “low risk“ of finding itself in a debt trap as a result of BRI-related lending.

In recent days, Bangladesh’s junior Minister for Foreign Affairs Mohammed Alam commented that the Bangladesh government “never will” ask China for more loans as it looks for ways to finance its future development. Instead, other financing models such as public-private partnerships were being investigated.

But like other countries in the region, Bangladesh needs major investments in ports. For a burgeoning export-driven economy, Bangladesh has a dearth of ports to either import energy or raw materials or export finished products. No new ports have been developed since Bangladesh gained independence in 1971.

For years, China has proposed building new ports at Chittagong and Sonadia, but these projects have not proceeded in the face of concerns from India and others.

Instead, the government approved a Japanese-sponsored port at Matarbari near Chittagong. This will include a coal terminal to service a new power station, a small container port and an LNG import facility. JICA has also expressed considerable interest in further port projects there or elsewhere in Bangladesh.

As a consolation prize, Chinese companies were granted the majority of contracts to develop a new deep-sea port at Payra towards the middle of the country, which will include an LNG terminal, an oil refinery, a coal terminal to service a power plant, and a container terminal.

But the Payra port project has not attracted the same level of criticism as other Chinese-sponsored port projects in the region, such as Hambantota or Gwadar. For one thing, the Payra project hasn’t used a “field of dreams” approach (build it and they will come) sometimes used in other BRI projects. Second is geography: Payra lies deep within the Ganges delta and must be approached by a 75-kilometre-long canal being dredged through mudflats. As informed Bangladeshis are happy to point out, this makes it a very unlikely place for a naval base.

The new container facilities currently being built at Matarbari and Payra have bought Bangladesh a few years of time, but it is clear that Bangladesh’s ambitions to build its export-oriented economy will require major additional port investment.

The Bangladesh government has long hoped that Sonadia container port project (initially proposed by China) might be built by a consortium that includes investors from Europe, China, Japan, India and elsewhere. Chinese companies would participate in construction, but not lead operation of the port. It remains to be seen whether Dhaka can pull a deal like this together. But Bangladesh is certainly trying to diversify its geopolitical risk.

However, for the moment, the biggest potential prize of the BRI is out of reach. The so-called Bangladesh-China-India-Myanmar (BCIM) economic corridor, under discussion for more than a decade, would develop overland transport linkages and manufacturing zones between India and southern China, running through Bangladesh and Myanmar. This could have massive significance for Bangladesh, putting it in a position to service both the Indian and Chinese economies. But India’s fears and the difficulties of coordinating the four fractious countries involved, means that the BCIM has now dropped off China’s official list of BRI projects.

David Brewster travelled to Bangladesh as a guest of the Bangladeshi government.