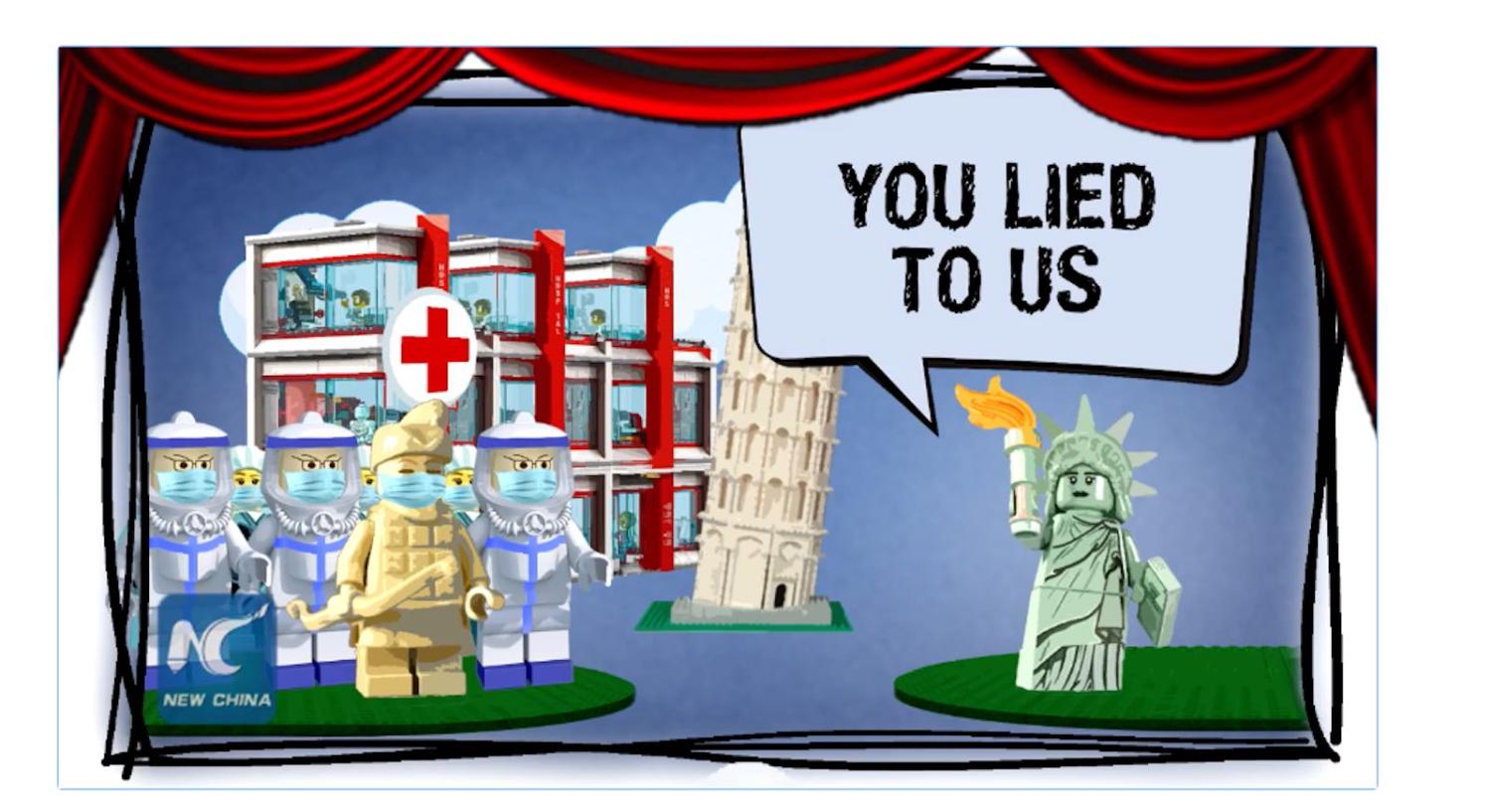 As the world struggles with the Covid-19 crisis, the US and China have been locked in a heated propaganda warfare over the handling of the virus. Hitting back at President Donald Trump’s claim that “China let it spread”, Chinese official media angrily accused the US of “groundless accusation” and “nefarious plotting”. The Chinese Foreign Ministry spokesman Zhao Lijian’s twitter post incited an equally unsubstantiated claim that the virus was a bioweapon of the US military.

Amid this public condemnation, conspiracy theories and disinformation campaigns, an unconventional animation video released by the state news agency Xinhua stood out in China’s propaganda arsenal.

Featured in Lego figures taking part in a play act, the one-and-a-half-minute video suggestively entitled “Once upon a virus” presents a series of interactions over Covid-19 between China and the US, represented by a group of terracotta warriors and the Statue of Liberty. The video opens with a mask-wearing warrior informing World Health Organisation (WHO) of a “strange pneumonia case”. The ensuing conversation takes place between the warriors, all equipped adequately with masks and hazmat suits, and the “bare” Statue of Liberty.

“We discovered a new virus”, the warriors say. “So what? It’s only a flu”, the Statue of Liberty replies. “Wear a mask”, “don’t wear a mask”, “stay at home”, “it’s violating human rights”, “build temporary hospitals”, “it’s a concentration camp” are the back and forth lines along which the debate develops.

The Statue of Liberty constantly defies whatever the warriors say and hence is portrayed as undermining the efforts of fighting the virus, while China’s advice and “achievements” are underlined. As the Statue of Liberty is too busy engaging in this war of words, her condition worsens. The video ends with her eventually wearing a mask and being attached to an intravenous drip, still blaming China and insisting that “even when we contradict ourselves, we are always correct”, to which the warriors ironically retort “That’s what I love about you Americans, your consistency”.

Three aspects of this video are important to highlight: communication strategy, symbolism of content and targeted audience. China’s sarcastic and light-hearted effort of fixing its already-damaged reputation stands in sharp contrast to the party-state’s previous approaches in conducting foreign propaganda, defined generally by charm offensive on the one hand and “fire and fury” on the other. Solemnity, dignity and formality are hailed as the rule of thumb of conducting politics in Chinese culture and are in turn reflected in propaganda materials.

China’s willingness to engage with the criticisms received sits in stark contrast with traditional propaganda approaches of denial and reaffirmations.

The party-state tends to distance itself from such political satire, reflected in one of the Global Times editorials response to South Park’s innuendo of Xinjiang’s detention of Uighurs as “knowing too little about China”. This time, however, China seems to be at ease to use some stereotyped charges against it, such as “violation of human rights” and “concentration camp”, as an irony to vindicate itself. While China presents the charges the US put forward, it does so in a way that portrays them linked to the Covid-19 policy in the US, making it easier to highlight the flaws and contradictions within both.

China’s willingness to engage with the criticisms received sits in stark contrast with traditional propaganda approaches of denial and reaffirmations of its own positions which generally paid little attention to what the interlocutor had said. The Xinhua video instead of bluntly reiterating the official position or all of governments’ arduous efforts so far, sarcastically ridiculed the US for engaging in a “blaming for blaming’s sake” game.

Markedly, China did not use more internationally renowned images such as a panda or dragon to represent itself. The choice of terracotta warriors symbolises the eternal power of Qin Shi Huang, the first emperor of unified China endorsing legalism as the official state doctrine. In his lifetime, he used his military might to brutally conquer neighbouring territories; in his afterlife, the 8,000-warrior terracotta army was meant to protect his emperorship into perpetuity. Adopting this symbol, China might imply that its draconian measures of effectively containing the virus are the manifestation of the disciplined Qin’s rule under legalism; parallels with President Xi Jinping’s rule, with lifted restrictions on his mandate and characterised by a harsh clampdown on critics and an aggressive foreign policy inevitably come to mind.

The Statue of Liberty is equally symbolic. Its “liberty enlightening the world” is mocked for its reverse effect in times of crisis, implying that human lives are traded for “liberty”, and as a consequence the freest country in the world is now the worst hit by the virus. Moreover, all characters are made from Lego parts which is ironic given the company’s controversial decision back in 2016 of not fulfilling Chinese dissident artist Ai Weiwei’s order due to concern that the bricks will be used to make a political statement; in line with its apolitical stance, the company denied any involvement in the production of this video.

The video, produced in English, was not disseminated by domestic media but targeted a foreign audience. Nonetheless, it was picked up by Chinese social media, recording over 11 million views since 2 May.

We can only suspect that the state is cautiously sounding out the public’s reactions on such undertakings. This would be in line with Xi’s administration interest in combining information technology with propaganda. In 2013, a video called “How Leaders Are Made”, similar to “Once upon a virus” in style, though far less sarcastic in tone, showcased how high-profiled politicians raise to power in China and the West. The production studio “Fuxing Road” (复兴路上) remained a mystery, though some lined it back to CCP’s International Department.

For now, it remains to be seen whether China is truly turning a new creative page in its propaganda manual.

Previous Article
In Yemen, a deadly concoction of arms sales, conflict and Covid-19
Next Article
Hong Kong: What China stands to lose

Links and stories from around the Pacific by The Interpreter team.
Christopher Mudaliar 4 Oct 2018 06:00