In the final debate among US presidential candidates before primaries begin, foreign policy took a rare front seat. 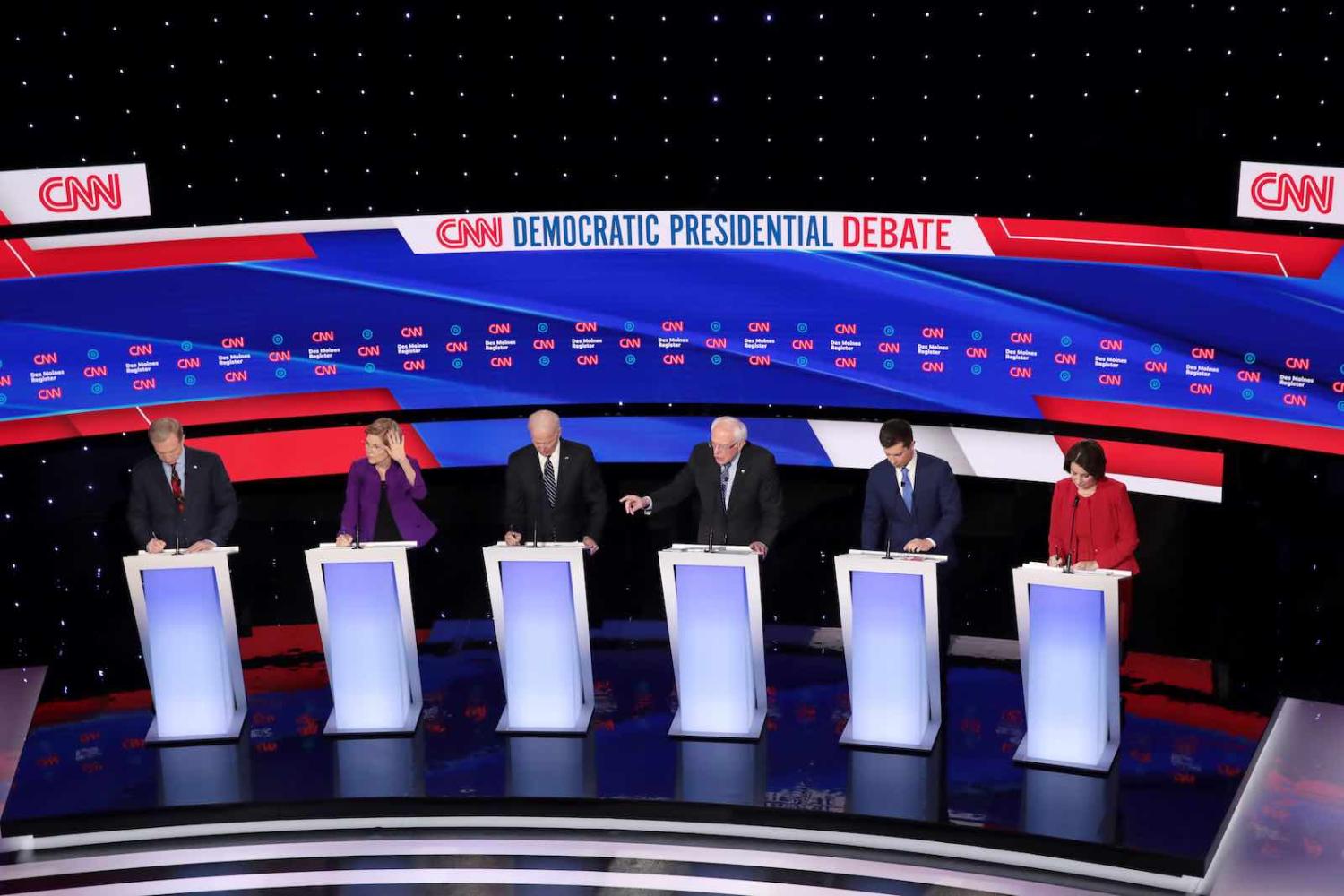 Last Tuesday night, six of the 2020 Democratic presidential candidates met on a debate stage in Des Moines, Iowa. This meeting was the final debate before the first-in-the-nation Iowa caucuses on 3 February.

While Americans generally prioritise domestic policy concerns when choosing a candidate, recently heightened tensions with Iran ensured that foreign-policy questions would be front and centre. The debate moderators dedicated the first, most-watched hour of the debate to questions about the use of military force and the role of the US in the world.

In the foreign-policy realm, there are meaningful differences between the moderate and progressive wings of the Democratic party, represented by the two front runners for the nomination, former Vice President Joe Biden and Vermont Senator Bernie Sanders. The debate provided an opportunity for Democratic voters to consider the distinction between the two.

The fact that electability is driving Democratic primary voters’ calculations also explains why the race is so unsettled. January polls show a tightly bunched top tier ahead of the Iowa caucuses.

Not surprisingly, Biden focused on his capacity to be a steady hand in a volatile world made more threatening by the actions of Donald Trump. He also played up his role as President Barack Obama’s trusted partner. In response to Sanders’s critique of his Iraq War vote, Biden acknowledged it was a mistake to trust the Bush administration but highlighted, “I was asked [by President Obama] to bring 156,000 troops home from that war.” He later talked about his work on the war in Afghanistan, the Iran nuclear deal, and the global coalition to defeat ISIS.

Biden stated that if elected, he would leave some US troops in the Middle East for stability, but he also stressed the need for finding diplomatic solutions and the importance of bringing people [other nations] around “… so the US can set the rules of the road.” Biden’s remarks suggested that a President Biden would return America to a gentler time when the US, together with friends and partners, was leading the world to better place.

This is an attractive, albeit optimistic vision for the post-Trump era, but many progressive thinkers see the disruptive nature of Trump presidency as an opportunity to try a new approach, since “…the [political] space to question America’s foreign policy traditions may be widening”. Whether that space is wide enough to allow for the election of a candidate like Bernie Sanders is an open question.

In a 2017 speech at Westminster College Senator Sanders promoted an American foreign policy based on “partnership, not dominance”. He discussed US military blunders in Iraq and Vietnam as an extension of past interventions in Iran, Chile, El Salvador, and Guatemala.  Senator Sanders’s view of the Cold War as “a cautionary tale” rather than a heroic American victory, in addition to his longstanding criticism of Israel, is a wholly unorthodox set of positions for a serious presidential candidate.

But in addition to the consistency of Sanders’s message over the past 30 years, the Senator has found a new audience with Americans under 30, who are less likely to view America as exceptional. During the debate, Sanders highlighted his early and vocal opposition to the Iraq War and argued that American foreign policy needs to prioritize working within international institutions.

The contrast in views within the Democratic party is of great interest to foreign-policy thinkers and the national media. The current dynamics in the Democratic primary, however, suggest that voters are predominantly interacting with issues through the prism of “electability”. This helps explain why a party that relies on the energy of women, people of colour, and young people seems to favour for the Democratic nomination two old white guys with good name recognition.

At this moment, Biden and Sanders are viewed not as ideological poles but as the candidates who share a potential to beat President Trump. Lee Drutman, a political scientist and authority on partisanship explained that “… when you look at individual voter preferences, you see a lot of people who are for Biden but Bernie is their second choice. They’re not thinking about it through an ideological frame.”

Clare Malone, an analyst from the polling website FiveThirtyEight suggested that electability concerns have dominated the Democratic primary since the beginning: “…voters have … said we kind of want a candidate that can win over those frankly white Obama Trump voters in basically six swing states.  People have been pretty frank … It’s not the time to – as Elizabeth Warren would say – undergo wholesale structural change. We just want someone who is kind of a transition figure who gets us back to a steady place.”

The fact that electability is driving Democratic primary voters’ calculations also explains why the race is so unsettled. January polls show a tightly bunched top tier ahead of the Iowa caucuses. All of the top four candidates (Biden, Sanders, Massachusetts Senator Elizabeth Warren, and former South Bend Mayor Pete Buttigieg) have a plausible path to victory in Iowa. Democratic pollster and strategist Geoff Garin explained that the race remains up in the air because “…voters are making intellectual and strategic choices rather than passionate choices.”

Party activists who spoke to the New York Times in Iowa in recent days emphasised their practical concerns and a good deal of angst about their responsibility to choose wisely. One voter suggested that Iowans are “worried about the country and they don’t want to make a mistake – they’re feeling the pressure”. Party activists mentioned that they planned to attend multiple campaign events over the course of a weekend because “it’s important to narrow it in on somebody that can beat Trump … A lot of candidates are saying the right things. But are they strong enough?” One former chairwomen of the Iowa Democratic party explained, “The number of undecideds truly has as much to do with the stakes as with anything else.”

There is no question that politics are about responding to the moment and that international crises elevate the salience of foreign-policy issues – and have the capacity to raise the stakes of the election. But it’s likely that anti-Trump sentiment among Democratic primary voters – although not necessarily among the broader electorate – was already at its highest possible level when Trump escalated tensions with Iran.

In the context of all that alarms Democrats about Trump, the distinctions between Biden and Sanders seem pretty small.

Previous Article
Book review: Where Power Stops
Next Article
At the UN, paying dues and having a say

The big bark but small bite of China’s trade coercion

Targeted sanctions on Australian exports have affected billions in trade, but the real damage has been limited.
John Edwards 20 Mar 2018 13:00

China will certainly respond to a forthcoming US investigation and exports penalties with sanctions of its own.
Erin Hurley 29 Oct 2020 05:00

US election: A Democratic trifecta is within sight

Donald Trump’s mismanagement of crisis has swayed voters toward the Democrats. What if they pull off a sweep?