Rumsfeld’s memorable quips should not obscure his central role in the catastrophe of the 2003 Iraq invasion. 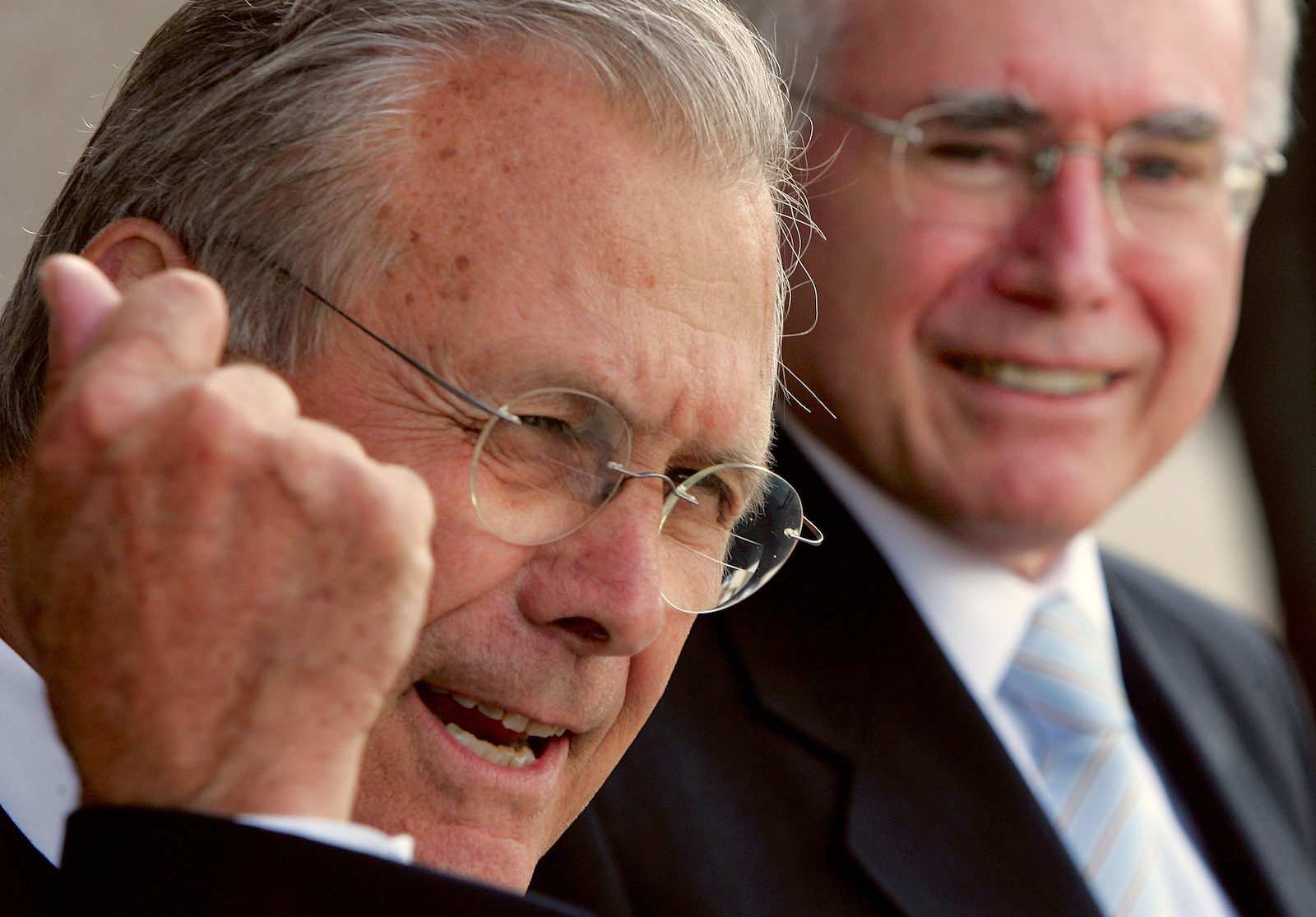 The countless observations about the quips of Donald Rumsfeld, who has died aged 88, should not obscure his central role in the catastrophe of the 2003 Iraq invasion. “Known unknowns” became the most famous, even serving as the title for an Errol Morris documentary. But Rumsfeld’s pugnacious gift for a pithy quote also delivered “old Europe”, a snide dismissal of widespread concern about the legality of America’s actions from treaty allies France and Germany. “Stuff happens” was his excuse when confronted by scenes of looting in Baghdad where George W. Bush’s administration had promised rejoicing.

Rumsfeld personified American unilateral arrogance, believing in power without consequences. He wasn’t Trumpian in his scorn for international limits or alliances; in his way he represented something worse – a bully willing to do more than talk.

But even to present Rumsfeld in this cartoonish fashion does no justice.

Rumsfeld didn’t present as a zealot. He was a brawler, a careerist.

On Afghanistan, so long the forgotten war in the obsession with Iraq’s Saddam Hussein, Rumsfeld was at least forthright, in private. “Help!” he jotted on one classified cable, apparently worried in 2002 about how the US would extract itself from the conflict. “I have no visibility into who the bad guys are,” he scribbled on another. But nor did he convince those around him that the war was a waste. According to other officials of the era, soon after 9/11 Rumsfeld was eager to target Iraq. And when the abuses at Abu Ghraib prison in Baghdad became public, Rumsfeld later conceded he should have resigned.

Labels such as “neo-con” don’t help much either. Rumsfeld didn’t present as a zealot. He was a brawler, a careerist. Rumsfeld was a rising star in the Nixon era. He was twice US Secretary of Defense, first during Gerald Ford’s administration in the 1970s and later for George W. Bush. James Mann’s 2004 book Rise of the Vulcans, which profiled key members of Bush’s cabinet, memorably captures Rumsfeld’s drive, and the different Americas coinciding with Rumsfeld’s two stints in charge of the Pentagon. The first, a US rebuilding after a drawn out and disastrous war; the second, a US with power unrivalled but unexpectedly vulnerable.

He had never achieved his early ambition of becoming president of the United States. Rumsfeld’s destiny was to become America’s consummate war minister, a cabinet secretary who sometimes appeared more powerful than a president. His performance in the second Bush administration would have warmed the heart of his old boss Richard Nixon.

Rumsfeld hosted Australia’s John Howard at the Pentagon during a 2005 visit, declaring his appreciation for Australia’s support for the United States. Most of the press conference was taken up by Iraq and Afghanistan, and questions about the prisoners held in Guantanamo Bay, which included Australians. It was a familiar formula – “For generations, US and Australian troops have stood together” – with promises of progress. While China only featured briefly in the discussion, it was enough to hint at the future contest that would shape the region closer to Australia.

Rumsfeld was asked directly if China was becoming more of a threat. He sidestepped the question, saying he would keep his remarks deliberately brief. Howard was more expansive, noting the different political systems between Australia and China meant challenges would arise, requiring “a question of maintaining the focus on those areas where we can work together”.

Rumsfeld offered no memorable witticism to capture the moment. But, at a stretch, perhaps his broader comments also summed up his fatalism about the world: “There will be a few steps forward and a step back. That’s the nature of things in life.”