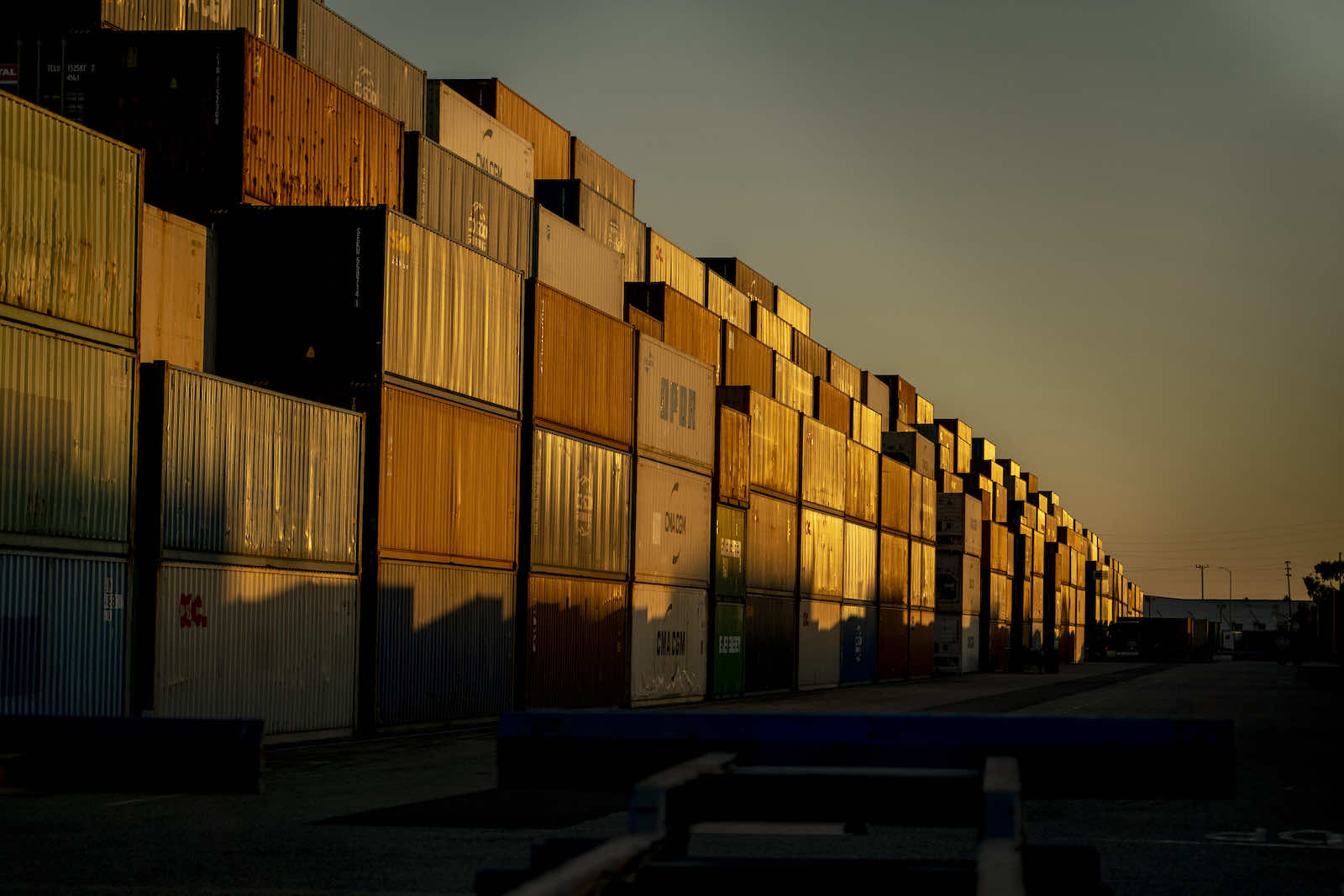 US President Joe Biden has ordered the Port of Los Angeles begin operating 24 hours a day and seven days a week in an effort to move goods and clear a backlog (Kyle Grillot/Bloomberg via Getty Images)
Published 21 Oct 2021 12:30   0 Comments       Follow @Greg__Earl

When Joe Biden first elevated “something called supply chains” to the global bully pulpit of a White House press briefing back in February it wasn’t hard to guess who the unnamed culprit was.

“We shouldn’t have to rely on a foreign country ­– especially one that doesn’t share our interests or our values – in order to protect and provide our people during a national emergency,” the US President declared ominously as he ordered a 100-day review of national security vulnerabilities in industries such as semi-conductors and critical minerals.

That executive order put some real steel into the debate about decoupling from China and now, for example, ripples through the communiques from the Quadrilateral Security Dialogue group.

But back at the same pulpit last week, Biden was more in reassuring Postman Pat mode as he announced some “good news” about speeding up the delivery of Christmas presents by ordering the Port of Los Angeles to operate 24 hours a day.

Many of the problems have older roots than Covid-19 or China’s recent trade coercion.

And this time there were culprits everywhere: “These goods won’t move by themselves … we need the major retailers who ordered the goods and the freight movers who take the goods from the ships to factories and to stores to step up as well,” Biden said of his bid to overcome a domestic supply chain crisis.

What’s striking about the need for the erstwhile leader of the free world to be fretting about whether Americans can get sneakers for Christmas is how the political focus has shifted from Chinese trade duplicity – at least for now – to a multitude of other causes.

For example, LA’s two ports handle 40 per cent of US cargo imports and FedEx and UPS combined move up to 40 per cent of the country’s packages. While we are comparing apples and oranges, that is a bigger bottleneck in those supply chains than, for example, Australia’s dependence on exports to China.

Many of the problems have older roots than Covid-19 or China’s recent trade coercion. The issues range from inadequate skills training as the logistics industry has been rationalised to inadequate understanding of third-party risks as supply chains have been stretched across the world with decreasing spare capacity.

Now on top of the logjams in ports, rising container costs and plant shutdowns due to energy supply disruptions, the perfect storm has really come from cashed up consumers spending money online accumulated during the pandemic lockdowns.

Even after 30 years of globalisation, there is astonishingly little detailed, publicly available information on product flows in global supply chains. Ministries need to restore the kind of engineering-based industry knowledge that was more common back when industrial policy was considered a key government function.

So with recent US and European business surveys suggesting that the Christmas present disruption will continue well into next year and Biden apparently so focussed on potential domestic political risks, it will be interesting to see what sort of remediation measures might emerge.

While it was overshadowed by other issues at the time, the June Group of Seven leaders’ summit backed the introduction of a system of supply chain stress testing modelled on what banks now have to do to avoid the sort of collapses that occurred in 2007 global financial crisis.

And there is a parallel between how that financial crisis reflected an overconfidence that decentralised markets would be capable of managing financial risks hidden in the depths of the US mortgage market and how Britain now has an energy crisis partly due to expelling foreign truck drivers as part of Brexit.

While Joe Biden put the until then obscure concept of a supply chain on the presidential agenda on 23 February, it is easy to forget the Morrison government was on the case four days earlier when Treasurer Josh Frydenberg asked the Productivity Commission to look at the risks in Australia. Frydenberg told it to:

examine the nature of the risks to the Australian economy as a result of global supply chain disruptions, identifying any significant vulnerabilities and possible approaches to managing them.

But it says something about Australia’s long fractious stalemate over climate change policy and opening its borders after the pandemic that Bidenesque levels of concern about supply chains haven’t been so evident.

The latest ACCI-Westpac business survey notes perfunctorily that “broad-based supply chain issues globally have spiked costs” but the Reserve Bank of Australia’s latest board minutes say “while disruptions to global supply chains were affecting the prices of some goods, the effect of this on the overall rate of inflation in Australia was limited”.

Frydenberg’s one substantive entry into this space on 6 September was more focussed on the China threat with his exhortation to Australian businesses to diversify. He simply noted the government’s budget initiatives to boost supply chain reliability which include the creation of an Office of Supply Chain Resilience.

It is striking that there has been no obvious government reference to the two reports it now has from the Productivity Commission which use a new methodology to assess import and export supply chain risks for Australia at a time when the Biden administration is actively implementing aspects of its completed 100-day review of its supply chains.

Perhaps that is because the Commission work does not play up excessive China risk or too much island nation vulnerability alarm. Indeed, it would seem the Commission experts think much of the disruption has been caused by short-term consumer goods demand – and pricing of goods and shipping will sort this out.

The research found one in 20 import category products (or 292 products valued at $20 billion out of $272 billion in imports) “might be vulnerable”. On the export side, 35 products were identified as vulnerable to downstream disruption or less than one in 100, but accounting for about one quarter of exports. However, 81 per cent of vulnerable products went to China.

Despite the growing government activity around the world in this area the Commission concludes:

risks are best managed by those who have direct incentives to mitigate them, and typically this means firms … government has a responsibility to manage risks in supply chains for which they purchase and deliver goods and services directly.

Japan’s new supply chain trouble shooter has wasted no time in focussing on resuscitating the country’s old strength in the semiconductor industry citing better strategic vision in both the United States and China as the main competition.

As noted previously here on The Interpreter, the appointment of Takayuki Kobayashi as economic security minister was the most interesting move in a new Japanese ministry that otherwise seems beholden to old school factional power sharing.

In a throwback to the corporate state of the 1980s, the new minister says the country needs to return to identifying essential technologies to protect and promote so that it remained “indispensable” to the world.

“The question is how we can establish areas where we excel so that the international community cannot survive without Japan,” he says in this Financial Times interview.

In a throwback to the corporate state of the 1980s, the new minister says the country needs to return to identifying essential technologies to protect and promote.

And Japan has already gone down this path in short order by persuading Taiwan’s national powerhouse Taiwan Semiconductor Manufacturing Company to open its first chip plant in Japan with reportedly generous government subsidies for half the cost.

While Prime Minister Fumio Kishida is embroiled in a contradictory election campaign economic policy which promises faster deregulated growth and more equal distribution of the spoils at the same time, Kobayashi seems to have clearer plans.

For example, he said that his wide-ranging mandate would extend to the 2019 Foreign Exchange and Foreign Trade Act which tightened control over foreign investment in Japanese companies prompting concerns it was aimed at curbing activist funds.