The two countries have an opportunity to pursue air-power cooperation in the Indo-Pacific, where stability is essential. 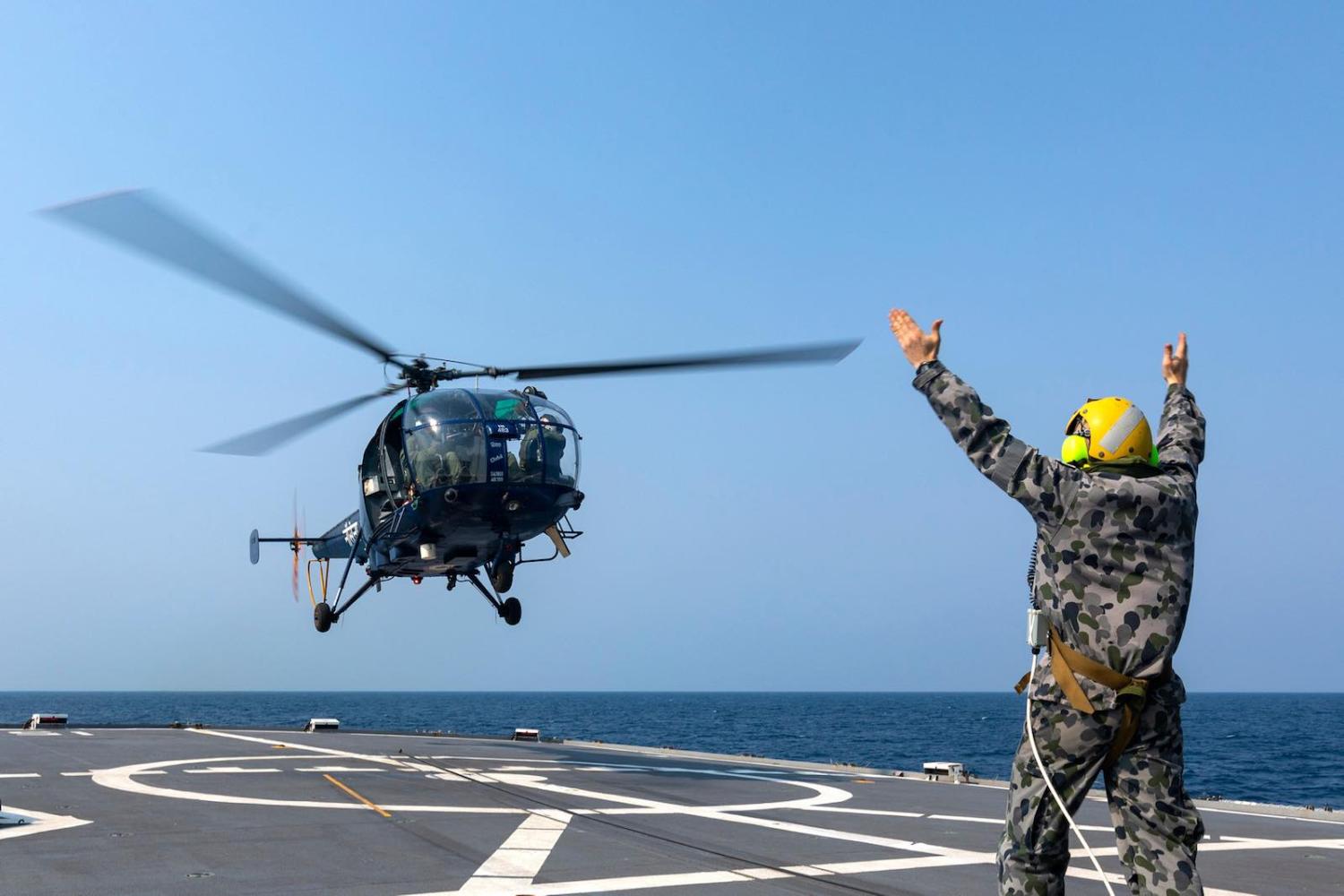 An Indian Navy Chetak helicopter lifts off from HMAS Parramatta during AUSINDEX 2019, in the Bay of Bengal (Australian Defence Force)
Published 2 Jun 2020

The forthcoming virtual summit between Indian Prime Minister Narendra Modi and Australian Prime Minister Scott Morrison assumes considerable significance for an India-Australia strategic partnership, particularly as it comes against the backdrop of heightened friction with China for both countries. Enhanced defence cooperation between the two countries could be an important signal to Beijing of the costs of overly assertive strategic behaviour – whether in the Himalaya or in trade. For some years, defence cooperation has largely focused on the naval relationship. Now is the time for enhanced air-power cooperation.

The Modi-Morrison virtual summit is likely to focus significantly on defence and strategic security interests. One deliverable will be the conclusion of a Mutual Logistics Support Agreement, finalised at the “2+2” dialogue of the foreign and defence secretaries in New Delhi last December. The agreement will facilitate reciprocal access to military logistics facilities and may be followed by other pacts aimed at developing alternative supply chains.

Aerospace cooperation is a largely unexplored area. India’s aerospace capability has seen considerable expansion in the last decade, creating new opportunities for cooperation. The Indian Air Force (IAF) long devoted most of its attention to India’s northern and western borders. But since it began addressing Indian Ocean security in the mid-2000s, there has been a quantum change in IAF’s expeditionary capabilities. These include induction of Su-30 MKI aircraft, air-to-air refuelers, AWACS, C-17 heavy-lift transport aircraft, C-130J special operations aircraft and a significant number of helicopters inclusive of heavy lift, attack, and medium-lift aircraft.

The IAF and the Navy have been carrying out bilateral and multilateral exercises with foreign air forces and navies for more than 20 years. Having started relatively late, India-Australia joint exercises are gathering momentum.

The IACCS (Integrated Air Command and Control System), combined with satellite communications and surveillance system, now enables the IAF to cover the entire northern Indian Ocean region. With the activation of new air bases in the Indian Peninsula and the Andaman and Nicobar islands (Sulur, Thanjavur, Thiruvananthapuram, Car Nicobar), the IAF now has significant reach in the Indian Ocean. In recent times, India has used IAF’s expeditionary capability to provide support to friendly nations through humanitarian and disaster relief operations.

IAF also operates Su-30MKI, Jaguars and Mirage 2000s for maritime operations in support of the navy. Plans for permanent basing of fighter aircraft in the Nicobar islands are on the cards, enabling the air force and the navy to expand their operational reach to the Malacca Straits.

Increased Chinese naval activities in the Indian Ocean and the Bay of Bengal highlight the importance for India of monitoring strategic choke points of the Malacca Straits and the Indonesian straits of Sunda, Lombok and Ombai-Wetar. With the proximity of Australia’s Cocos islands to the Indonesian straits and that of Andaman and Nicobar islands to the Malacca Straits, there is much potential for coordinated aerospace operations from these islands to monitor these strategic choke points.

The Indian Navy, with its Boeing P-8I maritime surveillance aircraft, has considerable reach and coverage across the Indian Ocean. Its carrier-borne air power is currently limited to one aircraft carrier, INS Vikramaditya, while a second domestically built carrier is likely to enter service by mid-2021. The Navy aims to become a three-carrier force by mid 2030s.

There is some possibility for international collaboration with the US in the development of the third carrier. India-Australia collaboration in related areas of aerospace industry, in areas of hi-tech components manufacture and supply logistics is also worth exploring.

Having established the post of Chief of Defence Staff, the Indian government is now restructuring towards integrated theatre commands. However, there is still a lack of clarity in the concept and structure. An Air Defence Command and a (naval) Peninsula Command are the first two likely integrated commands to be established by 2022, which would impact the IAF and Navy the most. While integration in operations is vital, success of integrated command is dependent on well-defined operational philosophy. This has some way to go, but once in place, an integrated command structure will help international cooperation.

While IAF to RAAF and Indian Navy to RAN interactions will continue in areas of training and service specific cooperation, integrated Indian theatre commands could facilitate operational cooperation by exploiting synergised aerospace and maritime resources. This could make a major difference in areas of intelligence sharing and ISR coordination, counter-terrorism, anti-piracy, maritime domain awareness, and joint coordinated patrolling in the Indo-Pacific. A good example is US INDOPACOM’s role for decades in promoting Indo-US defence cooperation.

The IAF and the Navy have been carrying out bilateral and multilateral exercises with foreign air forces and navies for more than 20 years. Having started relatively late, India-Australia joint exercises are gathering momentum. The two-week bilateral naval Exercise AUSINDEX has run every two years since 2015, and Australia’s interest in participating in the Malabar naval exercises may gain traction in Delhi this year.

In 2018, the IAF participated in RAAF’s largest biennial multilateral exercise, Pitch Black. There are further areas for significant IAF-RAAF cooperation. The IAF can, for example, gain from RAAF experiences of rapid operationalisation of network-centric warfare concepts. The two air forces can also bring enormous weight and synergy through joint humanitarian assistance and disaster relief missions in the Indo-Pacific, an area with high occurrences of disasters.

When India’s integrated theatre command reforms take effect in a few years, the two countries can take further mutual advantage of significant aerospace and naval capabilities. By coordinating and sharing ISR activities, aerospace and naval competencies, India and Australia can contribute considerably to ensure security and stability of the Indo-Pacific in the post-Covid world.

Previous Article
Who really killed the Quad 1.0?
Next Article
Mapping the cost of the pandemic to women in the Indo-Pacific

A pragmatic tone appears to distinguish the revived talks. Ambitious, not so much.
Melissa Jardine 8 Jan 2020 10:00

India must be realistic about Russia relations

New Delhi can talk up ties all it likes, but Moscow’s eyes are also looking east – to Beijing.