Jokowi’s running mate Ma’ruf Amin is reinventing himself as a proponent of moderate Islam. 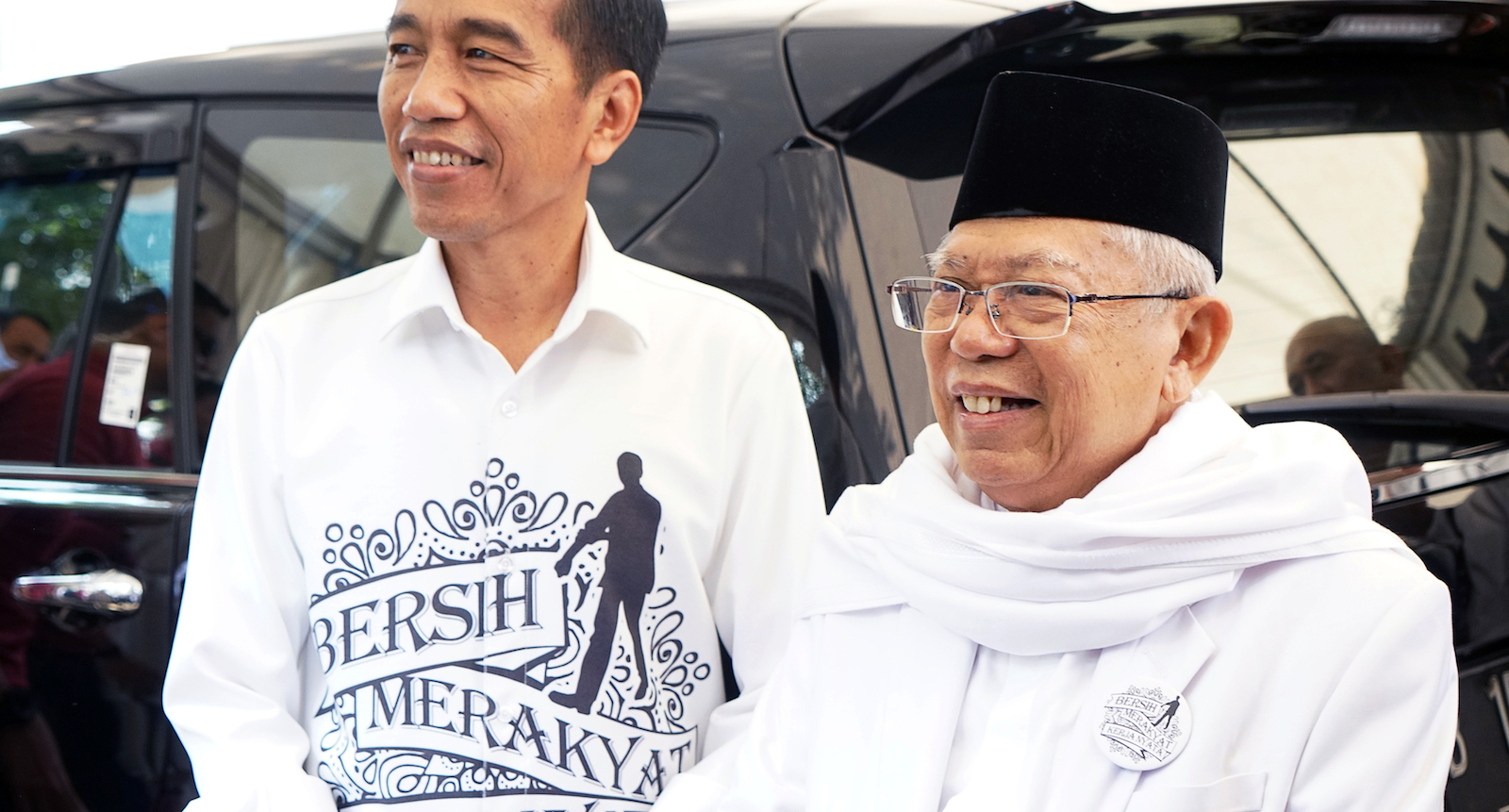 Observers of Indonesian politics would be forgiven for predicting that Indonesia’s presidential election campaign would be highly divisive, based on the Gerindra opposition’s highly effective exploitation of religious and ethnic schisms to defeat incumbent Basuki Tjahaja Purnama (Ahok) in the 2017 Jakarta gubernatorial election contest.

Yet this has not been the case to date in the lead-up to 2019 elections. In fact, the relationship between President Joko (Jokowi) Widodo and his presidential rival, Prabowo Subianto, has been surprisingly cordial.

In August, Jokowi and Prabowo were a picture of unity at the highly successful Asian Games. When Indonesia’s gold medal pencak silat (martial art) athlete, Hanifan Yudani Kusumah, leapt into the VIP stand to embrace both within Indonesia’s Merah Putih flag. Kusumah’s seemingly spontaneous act resulted in rapturous applause from the Jakarta audience, symbolising national unity between the key protagonists of the Jakarta election contest.

This was followed by another symbol of propinquity between the presidential rivals two months later when Jokowi characterised Prabowo as his “friend” in an Instagram post on the occasion of Prabowo’s 67th birthday.

The choice of running mates by Jokowi and Prabowo had raised concerns about the tenor of the presidential election race.

Prabowo’s running mate, wealthy businessman Sandiago Uno, had purportedly bankrolled the large protests that led to the defeat and ultimate imprisonment of Ahok in a campaign marked by ugly identity politics.

But even Ma’ruf, who sealed Ahok’s fate by issuing a fatwa characterising his reference to the Koran as blasphemous in his previous capacity as Chair of the Indonesian Council of Ulema (MUI), seems to be appealing to Indonesia’s middle ground.

Mar’uf has reinvented himself as a proponent of moderate Islam, a disposition more palatable to the international community and Indonesia’s economically influential Christian minority.

On 17 October, Ma’ruf made a keynote speech to the Singapore-based Rajaratnam School of International Studies (RSIS), something of a rite of passage for Indonesia’s aspiring presidential candidates. His speech, entitled “The Emergence of Wasatiyyah Islam: Promoting ‘Middle-Way’ Islam and Socio-Economic Equality in Indonesia,” reaffirmed the key tenets of Indonesia’s 1945 Constitution and the unifying ideology of Pancasila as the basis of the Unitary State (NKRI).

In his speech, Ma’ruf put democracy and religious pluralism at the heart of Indonesian Islam and rejected theocracy and extremism. Islam Wasattiyah, Ma’ruf explained, was a consensus which underpinned harmony between the Muslim and non-Muslim community. It could be understood as a “middle way” between the poles of right and left, synonymous with “balance, tolerance and egalitarianism”.

Interestingly, given MUI’s deeply conservative reputation, Ma’ruf committed the Council to Islam Wasittiyah, instructing its boards and councils to adhere to and propagate this “theology of tolerance”. In a historically significant reference point, he supported the controversial amendments to the 1945 Jakarta Charter by nationalist leaders, who removed a seven-word phrase obligating Indonesian Muslims to observe shariah law.

The Jakarta Charter would go on to form the preamble of the country’s 1945 Constitution. The amendment, Ma’ruf asserted, was a mark of “consensus and fraternity” between religions. Given the contested place of Islam in the Indonesian state since independence and the omission from the Jakarta Charter – to this day still a source of ire in sections of Indonesia’s Islamic community – Ma’ruf’s statements were significant.

In the conclusion to his speech, Ma’ruf signalled a policy shift from the prioritisation of hard infrastructure, so evident in Jokowi’s first term, to the development of Indonesia’s human capital, particularly through vocational education. He said national economic development should reduce disparity both between poor and rich and between different regions of Indonesia. The dilemma, as Ma’ruf couched it, was “how to strengthen the weak without weakening the strong” and “give maximum utility to human and natural resources”.

Mar’uf has reinvented himself as a proponent of moderate Islam, a disposition more palatable to the international community and Indonesia’s economically influential Christian minority. Through such keynote speeches, the Jokowi campaign team, led by the urbane 48-year-old former Chair of the Asian Games Organisation Committee, Erick Thohir, and backed by influential former Indonesian Armed Forces (TNI) officers, has positioned the government at the political centre.

Even Ahok, who has cause to feel greatly aggrieved by the role of MUI in his political defeat and imprisonment, has pledged his support for the Jokowi-Ma’ruf bid.

Ma’ruf’s policy emphasis on economic disparity and development of human capital may serve to partially erode the advantage of Prabowo and Sandi Uno who, until now, have indicated their election campaign would focus principally on the economy – levels of state debt, economic growth, employment and the price of essentials.

It seems Jokowi’s choice of Ma’ruf as his running mate, despite being controversial, has somewhat diminished the utility of religion as a viable weapon for the Gerindra-led opposition and, as other analysts have highlighted, served to split the conservative Islamist opposition mobilised against Ahok. Providing the Jokowi government continues its prudent management of Indonesia’s economy in the face of the destabilising effects of the US-China trade war and deftly manages wedge issues around religion, Jokowi’s re-election appears increasingly likely.

Unfortunately for Jokowi, Canberra’s announcement on the possible relocation of its embassy from Tel Aviv to Jerusalem and its inevitable linkage to the Indonesia-Australia Comprehensive Economic Partnership Agreement (IA-CEPA) has introduced an unexpected variable into Indonesia’s election mix, the potential of which has not gone unnoticed by the Prabowo-Sandi opposition.