Myanmar’s coup will test the loyalty of the security forces

Don’t assume the various armed forces organisations are just a mindless mass prepared to do whatever they are told. 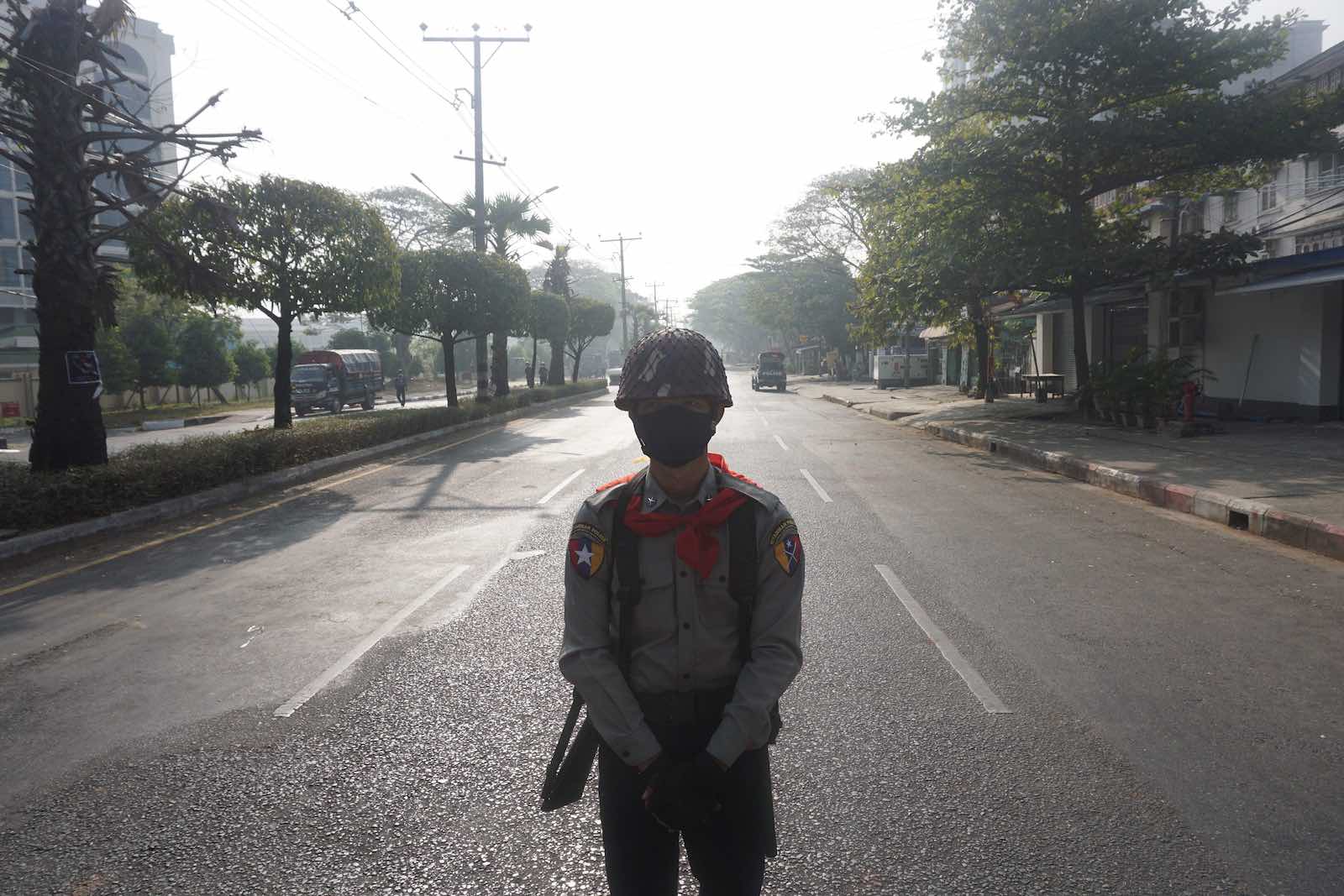 The military coup in Myanmar has again led observers to speak in sweeping terms of large groups, on the assumption that they all think and act alike. Hence references in the news media lately to “the armed forces”, “the police” and “the demonstrators”. In the circumstances, this is understandable, but it can lead to misconceptions and a misreading of events.

For example, Myanmar’s armed forces (known as the Tatmadaw) is a large organisation (no one knows quite how large, but most Myanmar-watchers accept a number around 350,000) made up mostly of ethnic Burman (Bamar) Buddhists. They have all experienced similar training regimes and been exposed to the same propaganda about the need for stability and the Tatmadaw’s special role in Myanmar’s national affairs.

Similarly, the members of the national police force, numbering around 80,000 (another rough estimate), have undergone the same process of indoctrination, sometimes at the same schools. Police men and women have been developing their own professional ethos, but they are still subject to the same kind of discipline as members of the armed forces. Indeed, many of them, particularly those in the paramilitary security battalions (or “riot police”), are former soldiers.

The state’s intelligence services, made up of four main agencies and a number of smaller units, consist of personnel chosen as much for their commitment to the military leadership and willingness to obey orders as they are for their individual skills and experience. (The gangs of “vigilantes” occasionally employed by the authorities during times of civil unrest cannot be considered real members of the security forces.)

Times have changed, and the latest generation of men and women in the security forces has grown up in a different environment than its predecessors.

In normal circumstances, the members of Myanmar’s security forces are likely to maintain discipline and obey the orders issued to them by their senior officers and, ultimately, the Tatmadaw’s commander-in-chief. There have been “desertions” and “defections” in the past, but over the last 60 years they have remained, to a remarkable degree, loyal and cohesive, bound by shared beliefs, a strict disciplinary code and an elaborate system of rewards and punishments. This helped Myanmar sustain the world’s most durable military dictatorship.

However, times have changed, and the latest generation of men and women in the security forces has grown up in a different environment than its predecessors. Since 2011, Myanmar has been more open, more interconnected and more familiar with foreign trends. As seen in operations against the Rohingyas, the security forces can still be ruthless, but it would be a mistake to assume that they are just a mindless mass prepared to do whatever they are told, without question.

All these organisations are opaque, but there likely exists within them a range of opinions about such issues as the future of State Counsellor Aung San Suu Kyi and Myanmar’s “guided” transition to a more democratic government. The National League for Democracy’s landslide election victory last November, for example, could not have occurred without the support of at least some of the men and women in the security forces, and their families.

Also, it must be remembered that during the nationwide pro-democracy uprising in 1988, some policemen and air force personnel joined in the demonstrations against the military regime. In 2007, during the “saffron revolution”, the Tatmadaw leadership was reportedly worried that their soldiers might refuse to open fire on the demonstrators, many of whom were members of Myanmar’s revered Buddhist sangha, or community of monks.

Since the 1 February coup, the new military regime has relied heavily on the police, rather than the army, to confront the large demonstrations on the streets of Myanmar’s population centres. Apart from one reported incident, they have refrained from using lethal force, in favour of water cannons, rubber bullets, tear gas, catapults and batons. Armoured vehicles have been deployed, but so far they seem to be aimed mainly at intimidating protesters.

There have been reports that a few policemen have already crossed the barricades and joined the protesters, but police and military discipline seems to be holding firm. It remains to be seen, however, if this will still be the case in the event of a serious confrontation between the security forces and the demonstrators. Should the generals give the order to use lethal force, they may win the battle on the streets, but they could risk losing the support of some of their own personnel.

Should there be a serious breakdown in discipline, let alone a mutiny in the army, or a split between the army and the police force, then the generals are in real trouble.

This is a critical issue. Lacking any popular mandate, the generals rely entirely on the state’s coercive apparatus to exercise power and maintain controls over the civil population. Should there be a serious breakdown in discipline, let alone a mutiny in the army, or a split between the army and the police force, then they are in real trouble. Based on past practice, they would react rapidly and forcefully to crush any dissident elements.

Should there be anything like an armed clash between elements of the security forces, with one side supporting the coup and the other supporting recognition of the re-elected NLD government, it would be a nasty business that could ignite a much wider conflagration. The ethnic armed groups around Myanmar’s periphery could even try to take advantage of the Tatmadaw’s problems, although they are unlikely directly to support the protesters.

For the generals, this would be a nightmare scenario. They would view Myanmar’s precious unity, stability and sovereignty (the three “national causes”) as being under threat. They would also be concerned about the survival of the Tatmadaw as an effective organisation. They may even fear for their own survival. There is no question that they would act to restore what they deemed to be “order”, no matter what the cost.

This is all speculative, but it argues for both sides of the current confrontation in Myanmar to consider their tactics carefully and to refrain from any actions that could inflame the situation, leading to potentially catastrophic outcomes. No one is arguing that the democracy movement should not stage public demonstrations and conduct campaigns of civil disobedience, but any moves that appear to directly threaten the security forces are likely to provoke an extreme response.

By the same token, foreign governments, international organisations and activist groups will need to exercise careful judgement in pressing for a return to the status quo ante. Incitement to stronger action on the part of the demonstrators could leave them with blood on their hands. Indeed, any suggestion that outsiders were encouraging protesters to try to divide Myanmar’s security forces or resort to violence would provide the generals with a reason to crack down even harder, including on those seeking a peaceful resolution of the current crisis.

A collected volume of Andrew Selth’s Interpreter columns on Myanmar, Interpreting Myanmar: A Decade of Analysis, has been published by ANU Press.