Small hope for justice in Mexico’s deadly “war on drugs”

Outrage over the 2014 disappearance of 43 students and the demand for national reckoning has far-reaching implications. 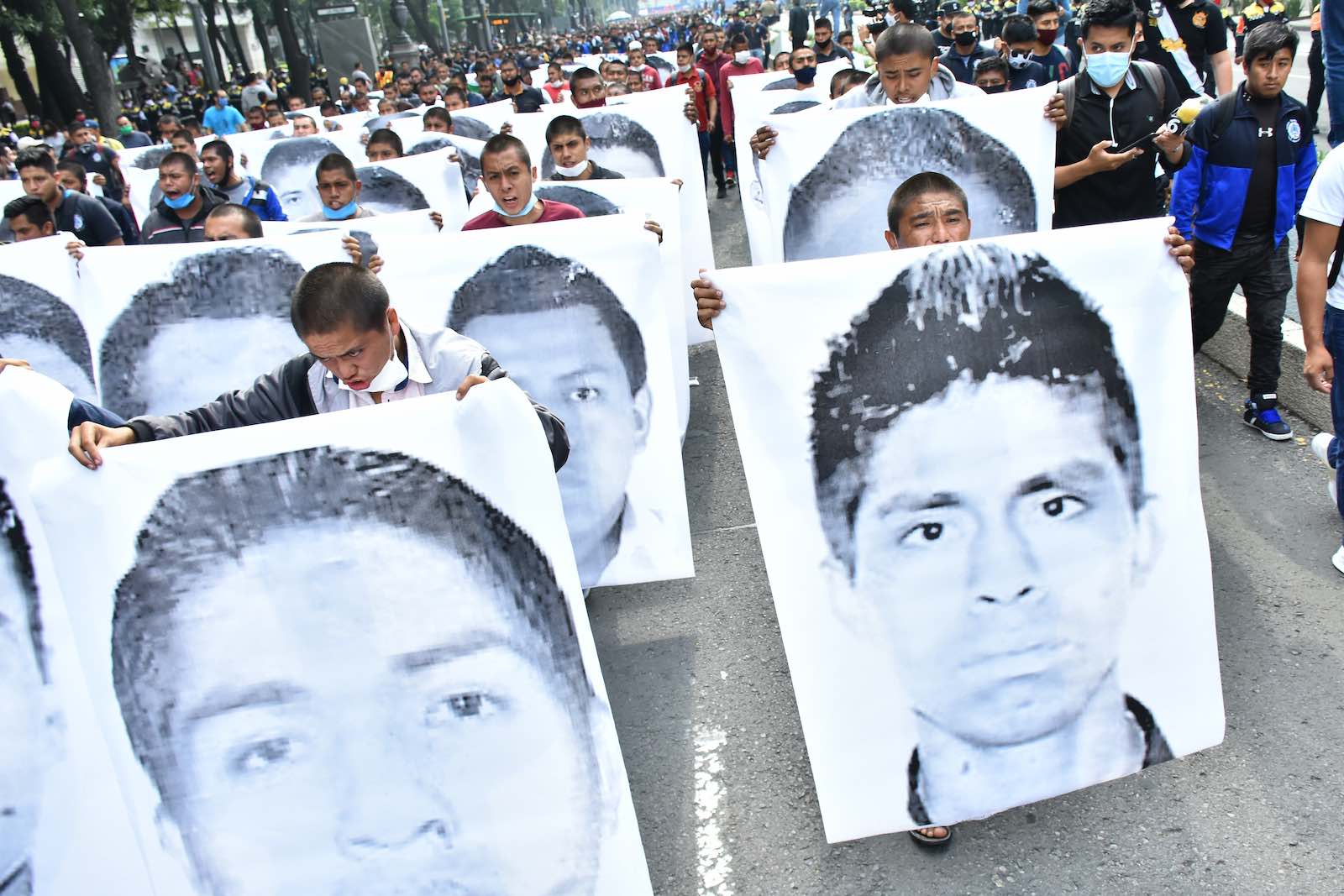 A protest demanding justice for “The 43” on the anniversary of their disappearance in 2014, Mexico City, 26 September 2020 (Carlos Tischler/Eyepix Group/Barcroft Media via Getty Images)
Published 10 Nov 2020 15:00   0 Comments

Fue el estado – “It was the state”. So goes one of the most repeated slogans of the movement to demand the truth of what happened to 43 students of the Ayotzinapa rural teacher’s college who disappeared on the night of 26 September 2014 from the city of Iguala, in the state of Guerrero in southern Mexico.

“The 43”, as they are known, were part of a group of young trainee teachers who commandeered a bus early that evening for the purpose of travelling to Mexico City. But the group was violently attacked before they had even left Guerrero, with six found dead, dozens injured, and the 43 not seen since. Of the heavily contested, murky details that continue to emerge from investigations of the case, it is certain that local and state authorities working with drug trafficking organisations are responsible.

The Ayotzinapa case was a watershed in the Mexican domestic tragedy of extrajudicial killings, impunity for crime, state violence and a deep collusion between politicians and criminal groups involved in the production and trafficking of banned drugs as well as a range of other organised illicit activities.

But these matters are not simply problems of politicians, criminal leaders and civilians inside Mexico. The traffic in banned drugs produced in Mexico with the protection of state authorities has well-travelled routes from Mexico to the US and Central and South America, stretching into Europe, Asia and Australia. The harms of the trade are well understood internationally, with human rights and civil society groups worldwide watching the representative case of Ayotzinapa as it was investigated by the Mexican government and later by the Inter-American Commission on Human Rights.

The US-directed “kingpin strategy” has actually resulted in the splintering and proliferation of armed organised criminal groups, and multiplied the alliances between organised crime and state power.

Mexico was then led by President Enrique Peña-Nieto of the Partido Revolucionario Institucional (PRI/Institutional Revolutionary Party), which had held the presidency for most of the preceding century. Veteran military officer General Salvador Cienfuegos Zepeda was Peña-Nieto’s Secretary of Defence, the head of the Mexican army. In this role from 2012 to 2018, Cienfuegos enforced the Mexican state’s so-called “war on drugs” in an ostensible binational effort with the US to destroy the trade in banned drugs (cocaine, heroin, methamphetamine and marijuana) from Mexico across the US border. Amid this scenario, the role of defence secretary/army chief in Mexico became one of essentially “second in command” to the president.

Fast-forward to this year, on 15 October, when the retired general was apprehended by US authorities when leaving Los Angeles airport with his family, apparently en route to a California vacation. Cienfuegos was detained on charges of drug trafficking and money laundering. He was accused of using his position as head of the Mexican army to produce, transport and distribute banned drugs from Mexico to the US, chiefly through accepting bribes from a Mexico-based trafficking organisation known as H-2 (which was linked to the more popularly known Beltrán-Leyva cartel).

Cienfuegos, who was known as “El Padrino”, The Godfather, is a big fish for US law enforcement in its ongoing efforts to stamp out the cross-border banned drugs trade. The arrest of the general comes in short wake of Genaro García Luna’s in December last year on similar charges. In that case García, chief of public security (2006–12) under president Felipe Calderón, was apprehended for accepting bribes from the infamous Sinaloa cartel headed by Joaquín "El Chapo" Guzmán, who is now himself serving a life sentence in a US “supermax” prison.

In the claim “fue el estado” – it was the state – the bereft parents of the Ayotzinapa students and their many allies within Mexico and internationally have directly implicated the Mexican army in the disappearance of the 43 from the beginning. In this they are backed by investigations, such as that by independent journalist Anabel Hernández, who has published detailed accounts of the involvement of police and army officers in intercepting the students on that September night in 2014.

Hernández found that the bus the young people had commandeered was, unbeknownst to them, loaded with around $2 million worth of heroin making the long journey from the opium poppy fields of Guerrero for sale on the streets of US cities – a cargo of illicit, high-value product in which top-ranking members of the army, police and government all had a stake.

So to have it alleged by the US Drug Enforcement Agency that Cienfuegos was a major trafficker of the very drugs he was supposedly waging war against on behalf of the Mexican people is profoundly vindicating for those who have been fighting to show just how deep the corruption of the state goes, particularly its ties with organised crime and the use of state violence to protect those interests, under the guise of combating the drug trade. As Secretary of Defence in 2014, Cienfuegos denied that the army had any involvement in the disappearance of the students and refused to allow his officers to participate in investigations. As well as Ayotzinapa, Cienfuegos has been implicated in other mass human rights abuses, including the Tlatlaya massacre in the state of Mexico, also in 2014.

The public increasingly came to see the Ayotzinapa case as symbolic of the country’s social and political binds.

The wreckage to Mexican society caused by the war on drugs is indisputable. The US-directed “kingpin strategy” of pursuing the heads of drug-trafficking organisations in order to break their power has actually resulted in the splintering and proliferation of armed organised criminal groups, and multiplied the alliances between organised crime and state power. The death toll from the resulting violence is at least 150,000 since 2006, while at least 60,000 have been forcibly disappeared, a fraction being discovered in mass graves, usually by relatives conducting civilian searches. A near-total rate of impunity for crime keeps accountability and change elusive.

As the interests and actions of Mexican authorities and organised criminal groups in the Ayotzinapa case were demonstrated – such as a deliberate cover-up by the Peña-Nieto administration revealed by the Inter-American Human Rights Commission investigation – the public increasingly came to see the case as symbolic of the country’s social and political binds.

Indeed, outrage over the Ayotzinapa case and the desire for national reckoning had a direct role in the historic election in 2018 of President Andrés Manuel López Obrador (known by his initials as AMLO), a self-styled political outlier who promised to pursue the truth of the events of Ayotzinapa. Yet since his election, AMLO has failed to deliver on promises to end corruption and to bring peace via “hugs not bullets” (“abrazos, no balazos”). There have been record highs in the homicide rate, while his security strategy is heavily invested in the same military that Cienfuegos led, including a recent move to place the Mexican army in charge of all ports. Still, perhaps knowing the public appetite for justice on this question, President AMLO has been coming through on Ayotzinapa: reopening the investigation in collaboration with the Office of the UN High Commissioner for Human Rights, meeting regularly with the parents of the missing students, pursuing the arrest of soldiers and federal agents alleged to have been involved, and even apologising on behalf of the state for the disappearance of the 43.

On the US arrest of Cienfuegos, AMLO, while critical of the intervention of the US Drug Enforcement Administration in Mexico’s affairs, said “we [Mexico] are not going to cover for anyone; those times are over.” Felipe de la Cruz, spokesperson for Ayotzinapa parents, told the media that they were considering asking AMLO to pursue extradition of Cienfuegos back to Mexico to face justice for his role in the disappearance of the 43.

To be sure, for many in Mexico the arrest and detention of General Cienfuegos in the United States has a meaning that far outstrips any triumph by the US in catching out another powerful “narco”.

It confirms the lived experience of many Mexicans that there has been total complicity between the state and armed criminal organisations for at least the duration of the war on drugs and its continuing fallout. It energises the claims of the families and allies of the Ayotzinapa students that the abuses of that emblematic case go right to the top. And it lends even greater weight to demands for accountability from a population that has disproportionately borne the terrible costs of the failed “war on drugs”.

Show Comments
Previous Article
What does a Biden administration herald for New Zealand?
Next Article
Biden’s comfortable style of diplomacy will be welcome for Japan