Many frame China’s options against Taiwan as peace or invasion. This is a dangerous oversimplification. 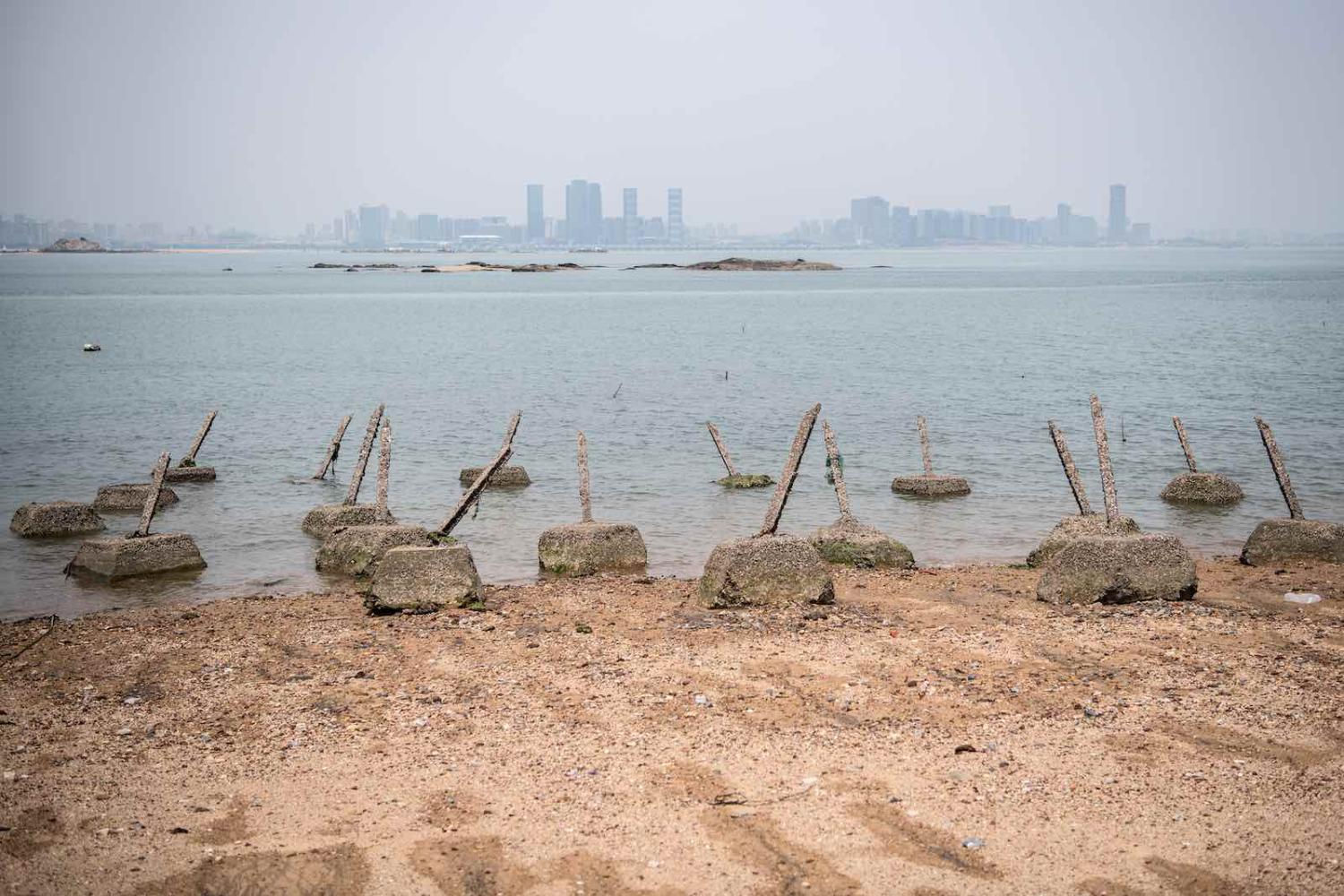 The Chinese Communist Party’s (CCP) war with the Kuomintang (KMT, or Nationalist Party) started in the 1920s, hit pause during the decade of anti-Japanese war and the Second World War, then culminated in an immediate post-war period with the remnants of the KMT fleeing to Formosa/Taiwan in 1949. The Chinese civil war has never ended – it has just shifted means, modes and tempo, and the “war” has continued to the present day.

The US has been enmeshed in this civil war almost since its inception, through acts and decisions not to act. It has played a decisive role at every juncture, even while professing an official position of not taking a position, other than that the two sides work to resolve the issue peacefully. The US decision not to support unpopular, deeply corrupt KMT leader Chiang Kai-shek – a Second World War ally ­– in his fight on the mainland hastened the CCP’s victory there, but only marked the beginning of the next phase of the Chinese civil war.

The deployment of the US Navy’s Seventh Fleet to the Taiwan Strait in 1950, after the start of the Korean War, effectively checked any plans by China to mount an invasion. Taiwan remained a military dictatorship until 1987, when Chiang’s son, Chiang Ching-kuo, lifted martial law and began the transition to a vibrant tech-led economic growth and popular elections to strengthen the island’s attractiveness to non-autocrats and counter its growing isolation. Even then, the official policy of the Republic of China on Taiwan was reunification under the KMT, not independence from China.

At the height of US-ROC relations, prior to President Richard Nixon’s 1972 visit to China, the US maintained a mutual defence treaty. The US stationed troops on Taiwan, kept nuclear weapons there, and US combat troops fighting in Vietnam would travel to Taiwan for R & R. On Kissinger’s first secret visit to negotiate Nixon’s trip to China, a key Chinese requirement was US agreement to remove its nuclear weapons from Taiwan. Taiwan would launch the first of its repeated efforts to develop its own nuclear weapons, all of them uncovered and stopped by the US government and the international community.

For the past 40 years, in part because of the US commitment neither to support Taiwan independence nor to abandon its former ally, China shifted priorities for its war with Taiwan to building cross-strait relations, and strengthening the basis for stable US-China relations. When tensions flared and China staged military demonstrations, its goal was to maintain this status quo. In many instances, the principal target of the CCP threats and military demonstrations during periods of tension (typically around a Taiwan election cycle) was to put pressure on the US to constrain Taiwan rather than act directly on Taiwan itself. And the US frequently performed this role (eg. public comments by presidents or senior US officials viewed by Taiwan voters as critical of the candidate of the Democratic Progressive Party, the party typically regarded as most sympathetic to independence).

The primary political goal of the CCP’s struggle from roughly 1979 until now has been to preserve the possibility of political unification at some undefined point in the future. Tellingly, China’s 2005 law laying a foundation for the use of force is an “anti-secession” law, not a “reunification law”, a distinction that was actively debated for the two years prior to its passage.

But in a very real sense, over decades of relative peace, a massive expansion of economic, tourist and people-to-people ties between Taiwan and the mainland, the Chinese civil war has continued. China has been conducting an “all of regime” strategy for reunification for decades that has remained at low to moderate intensity, employing non-military means because successive administrations on Taiwan, and in the US, have not pressed the issue. China has been able to sustain its immediate goal of preserving the possibility of political compromise under a framework that it can call “reunification” as Beijing built China’s composite national power and controlled the risk of war through deep integration with Taiwan, the US and the international system.

Those closely watching this situation for the past several decades will understand that China has a political strategy for unification, which has a military component.

Most US analysis reverses this and frames China’s options as peace or war, and if war, the only military option they consider is invasion. This is a dangerous oversimplification.

Many of the understandings, military factors and ambiguous positions that enabled decades of peace, prosperity and democracy on Taiwan are now eroding, due to China’s burgeoning economic and military power, Taiwan’s consolidating democracy led by the pro-autonomy DPP, and burgeoning US determination to play the “Taiwan card” in its strategic rivalry with China.

If military conflict comes to the Taiwan Strait in the next few years, the past will not serve as prologue for China’s modes, means and goals. The unfinished Chinese civil war will re-emerge as not only a military contest. And it’s likely that, from the moment the shooting starts, it will cease being the unfinished Chinese civil war and will become the China-US war. Taiwan would be the first battlefield of intensive combat operations between the world’s two most powerful military forces in a war that would quickly cease to be primarily about Taiwan’s autonomy, prosperity or the lives and livelihoods of its 24 million people.

For China, the first and most important goal would not be to quickly “win” in a conventional military sense. Instead it would be to “not lose”.

For the CCP, such a conflict would be about its legitimacy and survival, and the return of China as the dominant power in East Asia. Not contesting probably would not be an option for the CCP – indeed, it seems convinced that it has an asymmetrical interest in the outcome compared to the United States.

For Washington, it would present a Hobbesian choice: intervene in open-ended, financially ruinous conflict with another nuclear power for the first time and risk unprecedented combat losses, or be seen as standing aside in the face of an assault on a vibrant democracy and its 24 million citizens. US allies and partners would be torn by the cost of picking a side versus the potential ramifications of not countering Chinese aggression.

In a crisis to compel unification, the scope and intensity of China’s means, modes and measures could increase exponentially. It probably does not need to invade the island quickly, and if successful (by no means assured), then fight a ruinous counterinsurgency for decades. For China, the first and most important goal would not be to quickly “win” in a conventional military sense. Instead it would be to “not lose” while it sets the conditions for eventual victory – a victory that the CCP will frame in political rather than strictly military terms.

The CCP probably could afford to continue to be patient as it executes a series of strategic campaigns. It will be prepared for this war to last for months, perhaps years, and even for a decade if necessary. It will be analogous to other struggles for national unification – those in Vietnam, Korea, Germany and even the US Civil War.

If the Chinese civil war becomes a kinetic conflict, the key distinction that China will make is that East Asia is in a condition of “not peace”, along with all the economic and security ramifications of that new reality. The region that has driven global economic growth for the past several decades would become a war zone, breaking global supply chains, transportation links and financial systems.

The second key condition China will seek to impose is that US military presence, and access to bases, waters and airspace make enabling countries targets for multiple domains of Chinese aggression. Rather than being the “security guarantor of the Western Pacific”, China will seek to make the US the “insecurity guarantor” disrupting the region’s (and the world’s) trade, prosperity and peace, and to create doubt and gaps between the US and its allies and partners.

For China, its adversaries’ centre of gravity isn’t their purely military capacity to blunt an invasion. Instead, it’s the will of the Taiwan people and military to fight, and the will and capacity of the US to intervene decisively and maintain a posture to do so for a long time. Military operations almost certainly would not be binary – bluster or invade – but a wide spectrum that can be intensified or reduced at China’s choosing.

China can, early in a conflict, use long-range strikes to destroy all of Taiwan’s key military and leadership facilities, power generation and telecommunications. It can embargo all of Taiwan’s oil imports and cut or compromise via cyber all high-bandwidth connectivity to the outside world. And it likely can sustain this indefinitely. It can seize all Taiwan-held offshore islands, including the Penghus and Pratas, and use these as mobilisation and embarkation bases for future landing operations on Taiwan, and as chokepoints against US intervention, while burnishing nationalist domestic support early in the conflict.

And perhaps most importantly, it can seek the right time and conditions to demonstrate to the people of Taiwan – and Japan, Australia and the US – that the US military cannot prevent or undo China’s actions, and either will not put its major military assets into harm’s way, or having done so, will suffer surprising and politically devastating losses. Beijing would strive to portray the US position as analogous to victoryless wars in Vietnam, Iraq, Afghanistan, albeit at far higher potential human and financial costs for the US and its allies.

In such a scenario, what China would want – and what the CCP would need – is an end to the Chinese civil war on terms that it can call “reunification”. Its best outcome would be one negotiated by Taiwan political authorities that cannot be negated by US military, economic or diplomatic action. Arguably, from the CCP’s perspective, the most effective way to bring about a negotiated outcome could be to deter or defeat the US military as a primary line of operations, rather than invade Taiwan, and then take advantage of the psychological impact on Taiwan to press for negotiations.

To read more from John Culver and other experts about China’s perspective on the rules-based order and its relationship with the US, see the special interactive published by the Lowy Institute.

Previous Article
Duterte’s vaccine promise is a political placebo
Next Article
In Bangladesh, Covid adds to a list of maladies

Watching on: Australia and the Korean Peninsula talks

Australia has put its trust in Donald Trump and his transactional, “deal-making” style of diplomacy.
Tristan Kenderdine 9 Jan 2018 10:29

Military on the front line in Thai election

An ex-army general poised to become prime minister and a junta-manipulated constitution has many Thais fired up.