A crackdown on “wrong spendings” signals an important transformation for the communist regime – but Vietnamese are wary.

On Monday, Vietnam’s former transport minister Dinh La Thang was sentenced to 13 years in prison. Another prominent figure, Trinh Xuan Thanh, received a life sentence for “deliberate violation of state regulations on economic management”. It is first time in Vietnam’s recent political history that a high-profile Politburo member has been subject to this kind of punishment. After the relatively express trial, Vietnamese Communist Party Secretary General Nguyen Phu Trong announced a determination to continue targeting “spoiled elements” of the Party.

When Dinh La Thang – then Minister of Transport, head of the Vietnamese Communist Party in Ho Chi Minh City, and a member of the elite 19-member Politburo – was stripped of his positions in May 2017*, it was a sign that something serious was happening in Vietnamese politics. Thang’s case would not have attracted so much attention if not for his unusual career path and influence in the key industries of oil and banking.

More importantly, Thang's was not an isolated case. Some 20 more individuals linked to the oil and banking sector have also been sentenced, including Trinh Xuan Thanh, head of oil giant PetroVietnam, who was captured in Germany by an international intervention. Later, Phan Van Anh Vu “Vu Nhom”, a business tycoon, was seized in Singapore. Vietnam’s ties with Germany suffered following the alleged kidnapping of Thanh, yet the arrest of these once-powerful individuals, even at the cost of diplomatic relations, was a signal of serious purpose within the Vietnamese Communist Party.

While many in Vietnam welcome the crackdown on prevalent corruption, others see only the ripples of a fierce power game within the Party.

Corruption is a widespread and recognised problem in Vietnam. According to Transparency International, Vietnam ranks 113th of 176 countries in the Corruption Perception Index, and scores one of the highest rates in terms of bribery practices (the rate citizens have paid a bribe to key public institutions over the past 12 months) at 65%, second only to India with 69%.

A 2014 report from the Vietnam Chamber of Commerce and Industry found corruption slows down GDP growth by an average 0.23% each year. The oil and banking industries, as exposed in the recent cases, are particularly prone to what in Party language is called “wrong spendings”.

Nguyen Phu Trong vowed to restore confidence in the Party when he renewed his position as Secretary General at the 12th Party Congress in January 2016. This meant, among others issues, addressing widespread corruption and fraud in the public sector that has damaged the image of the Vietnamese Communist Party. After a successful bid against former prime minister Nguyen Tan Dung, Trong promised a “reform in the right direction” and to address crony capitalism – a practice that Dung excelled in.

The scale of mismanagement

Dinh La Thang had been a popular and influential political figure; at 56 years old he was relatively young for such a senior position, compared to his counterparts. He had also previously served as chairman of PetroVietnam, from 2009 to 2011, when he was seen as one of closest partners of then prime minister Nguyen Tan Dung.

During this time, Thang invested large amounts of Petro capital (reportedly more than 20%) to Oceanbank Group, which made an estimated US$88 million loss. Thang was also responsible for about $523 million in failed investments, and allegedly advanced $67 million to the Vietnamese Communist Party, which did not use the funds for the proper purpose, causing losses of $5.5 million to the state.

Thang’s case is important not only because of the scale of mismanagement, but also because of the nature of the retrospective investigation. The budgetary misuse dated back to period 2009–11. If such retrospective punishment is to be enacted consistently, the Vietnamese political scene is about to undergo a large-scale “clean up” at the Party’s highest level.

The prominent arrests are likely to be only a prelude to an important transformation of the communist regime. A logical comparison with the impressive anti-corruption campaign in China under Xi Jinping is being drawn, and while Xi’s “political earthquake” has undoubtedly served as inspiration, it is doubtful that such consolidation of power under one man is possible in the Vietnamese collective leadership model.

But unlike the generally positive reception in Chinese society about the anti-corruption campaign, Vietnamese remain unconvinced (at least not yet). If this is indeed a prelude to a systematic “cleaning” of endemic abuse of power in the state economy, the campaign will gain societal support. Should it remain a selective and targeted political power game, it may achieve greater unification within the Party but cause a wider divide within Vietnamese society.

*This piece originally stated that Dinh La Thang was arrested in May, and that Trinh Xuan Thanh was a former Politburo member. 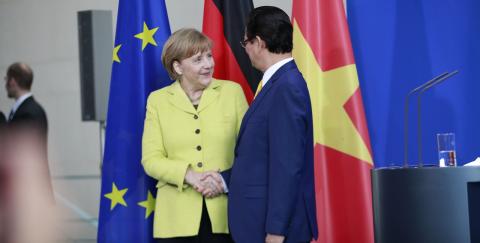