What are the prospects for stability across the Taiwan Strait?

A democratic Taiwan has considerable agency and capacity to affect the dynamics of power in East Asia. 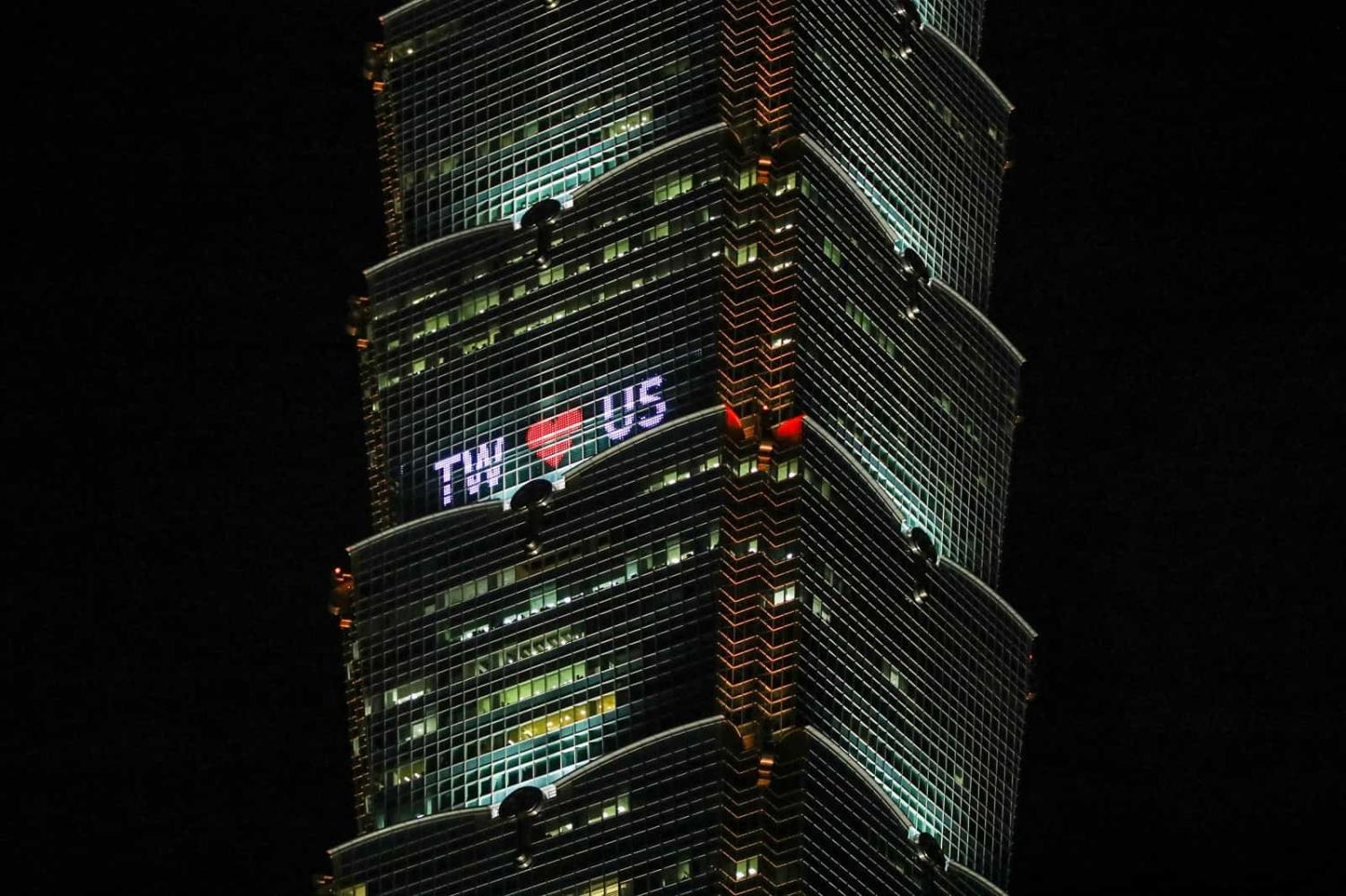 The Taipei 101 building lit up with a message reading "TW hearts US" before the impending visit of US House Speaker Nancy Pelosi, 2 August 2022 (I-Hwa Cheng/Bloomberg via Getty Images)
Published 24 Aug 2022     Follow @JiaAu

It is under debate whether we are heading towards a fourth Taiwan Strait Crisis. This month alone, US House Speaker Nancy Pelosi visited Taiwan, China responded with unprecedented sea and air combat drills in six exercise zones around the island, and Beijing published a White Paper on the question of Taiwan’s reunification with China. This was swiftly followed by another US congressional delegation travelling to Taipei.

Although all the parties declare they want stability and warn the other sides to avoid provocation, each has been testing where it can go further. The possibility of maintaining stability across the Taiwan Strait looks less and less likely given the direction in which the key regional players are heading, namely China, Taiwan and the United States.

First, the military exercises conducted by the People’s Liberation Army (PLA) to test and strengthen its integrated combat ability could become a “new normal” across the Taiwan Strait, based on Beijing’s perception of further challenges to its “One China Principle” by Taiwan, the United States and US allies. Grey zone military operations will continue to be applied to subdue Taiwan. Additionally and probably more significantly, China will continue to develop its military capabilities, especially in nuclear weapons. Such a posture seeks to shape a situation where Taiwan’s independence and a war over the island is unthinkable.

In terms of lawfare, there is speculation that Beijing might promulgate a “National Reunification Law” after the 20th Party Congress.

Politically, the White Paper maintains the “One Country, Two Systems” framework is still applicable to pursue a peaceful reunification with Taiwan, but its appeal in Taiwan is in doubt. As analysts have noted, compared to the versions published in 1993 and 2000, the 2022 White Paper implicitly suggests that “Two Systems is subordinate to and derives from One Country” and that Taiwan would enjoy less autonomy after unification. If this interpretation stands, how operational is the framework when the majority of Taiwanese disapprove of it according to public opinion polls by Taiwan’s Mainland Affairs Council in March 2022?

In terms of lawfare, there is speculation that Beijing might promulgate a “National Reunification Law” after the 20th Party Congress later this year that could stipulate measures and steps for China to proceed with national reunification including legal consequences for committing “serious crimes of secession”. Interestingly, the White Paper singles out Taiwan’s ruling Democratic Progressive Party (DPP) authorities for having “adopted a separatist stance” as distinct from “the 23 million Taiwan compatriots”. If reunification were eventualised, legal consequences would all fall on “separatists”. Internationally, Beijing will continue its efforts to “institutionalise and normalise” its “One China Principle” as a universally accepted norm to legitimate its position on Taiwan and constrain Taiwan’s participation in intergovernmental organisations.

Taiwan’s politics and emphasis on democratic identity are key drivers of its significant agency and regional dynamism. The Third Taiwan Strait Crisis (1995–96) was arguably triggered by the then President Lee Teng-hui’s “two-state theory” and public diplomacy manifested in his visit to Cornell University in the United States. The referendum campaign on Taiwan independence during the DPP’s Chen Shui-bian presidency rendered a backdrop for China’s 2005 Anti-Secession Law. Taiwan’s democratic identity has been vigorously promoted by the DPP’s Tsai Ing-wen government to rally domestic and international support. It is predicted that her successor will continue this strategy after the next presidential election in 2024.

Why does Taiwan matter to the United States?

Although it does not have formal diplomatic relations with Taipei, the United States considers Taiwan “a key US partner in the Indo-Pacific” – located in the first island chain to block China from moving further into the Pacific. If the United States failed to support Taiwan under China’s pressure, US allies might question the country’s role and commitments in the region, particularly at a time when US power is perceived to be in relative decline.

The Taiwan issue thus constitutes a key node of the structural rivalry between the United States and China.

Ideologically, the United States views Taiwan as a successful model for democracy, making a strident contrast with China’s internal tightening under President Xi Jinping. The visits made by US congress delegations are thus a test for Taiwan’s global status under Chinese pressure and send a strong message to the world that others should not yield to Beijing’s demands.

Economically, Taiwan is the United States’ eighth largest trade partner as of 2021. It provides critical value in global high-tech manufacturing. As an example, in July this year, the United States proposed the “Chip 4” alliance, which would include Taiwan, with the intention of competing with China in the semiconductor industry and supply chain.

Geopolitically, the United States, with key regional ally Japan, will continue to support Taiwan and would play a major role in any Taiwan contingency. Washington is clear that its strategic interests in the Indo-Pacific have not been shifted by events such as the war in Ukraine, rather its alliance policy has been strengthened and “countering China” remains its strategic priority.

Chih-yu Shih, a political science professor at National Taiwan University, recently commented that the United States is seemingly pushing China towards unifying Taiwan by force. Shih argues that “what China pursues is a peaceful unification”. He suggests that the United States has seen that should China take military action, it would likely become bogged down, as Russia has in Ukraine. The United States in such a scenario would support and use Taiwan as a proxy in its great power rivalry with China, while avoiding direct conflict. In this regard, a proxy war over Taiwan between the Taiwanese and the PLA would be detrimental to China’s rise but in the strategic interests of the United States.

The Taiwan issue thus constitutes a key node of the structural rivalry between the United States and China. Xi’s China is explicit that “Resolving the Taiwan question … is indispensable for the realisation of China’s rejuvenation” and appears less patient with the United States’ goal of maintaining its primacy in the region. In this tug-of-war, a democratic Taiwan has considerable agency and capacity to affect the dynamics of power in East Asia.

This work by Dr Jade Guan is supported by a research fund she received from the 2021-22 Australian Strategic Policy Grants Program. The views expressed are those of the author and do not represent any organisation.

Previous Article
Penny Wong on “30 minutes with the PM” and Australia’s global interest
Next Article
Solomon Islands: a blueprint to stop a cycle of strife

Rather than a personality rivalry between Mahathir and Anwar, a wider decentralisation of political power is underway.
Nick Bisley 31 May 2017 16:22

Competition for influence in an integrated Asia

Competition and contestation among Asia’s mega powers will be the defining feature of the region’s future.