Whatever happened to the South China Sea ruling?

Five years ago the Philippines largely squandered a crucial legal win. But it’s not too late to marshal support. 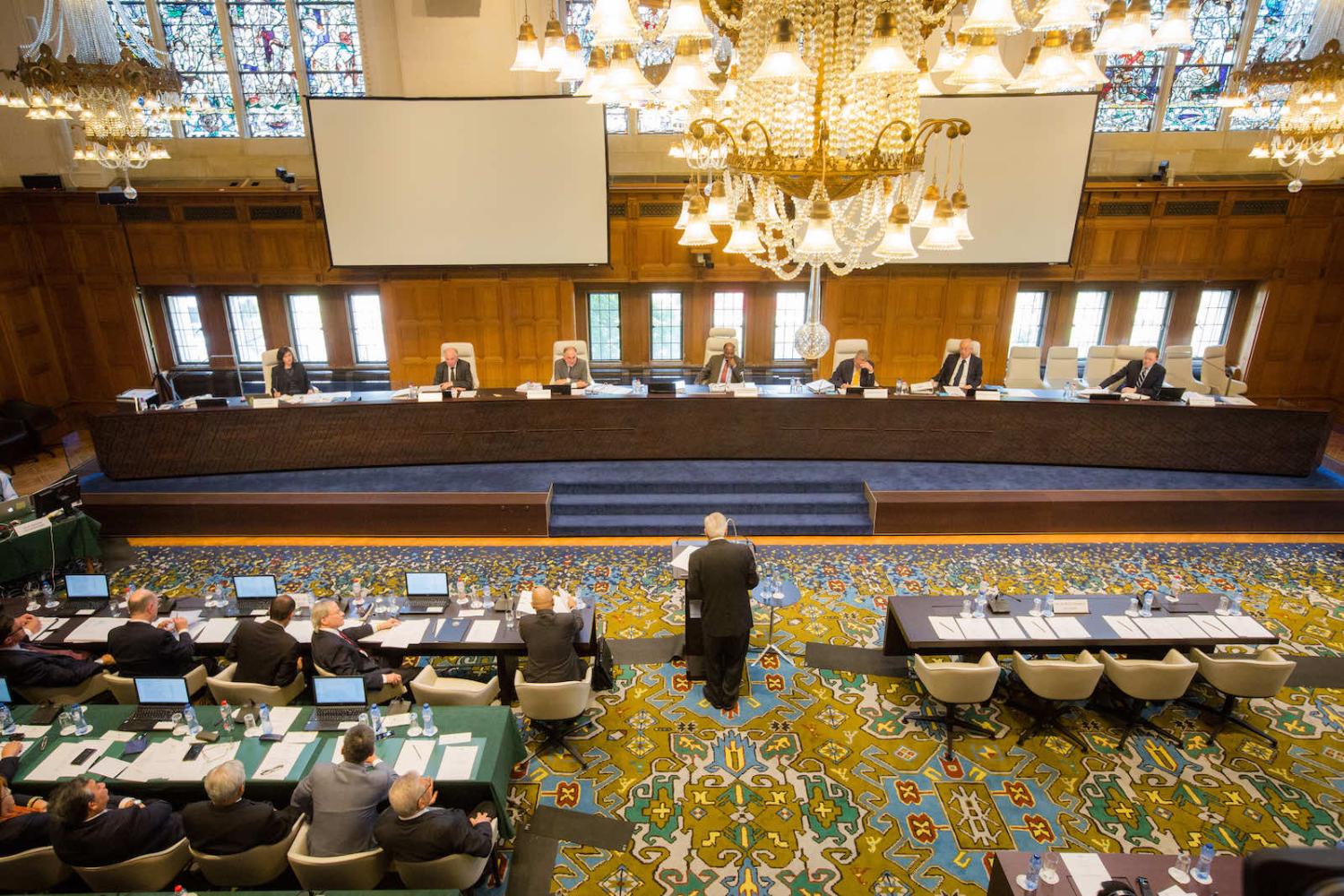 A hearing in session from the Permanent Court of Arbitration in the case of the Republic of Philippines vs the People’s Republic of China, with a ruling delivered in 2016 (PCA 2013-19)
Published 12 Jul 2021     Follow @pratikjakhar

Five years ago on this day, an international tribunal in a landmark ruling dismissed Beijing’s claim to much of the South China Sea. The Permanent Court of Arbitration at The Hague said on 12 July 2016 that there was no evidence that China had exercised exclusive control historically over the key waterway.

What was expected to catalyse a stronger pushback against Chinese actions in the disputed sea has, essentially, been reduced to just a moral victory for the Philippines.

Clearly the verdict has had little impact on China’s behaviour as its land reclamation and creeping militarisation continues unabated, while its vessels regularly intrude into Filipino waters.

What was not expected was that the leader of the primary litigant of the case – the Philippines – would seek to undermine his country’s legal win.

Despite the recent tensions between Beijing and Manila, Rodrigo Duterte has shown an inexplicable reluctance to use the ruling, instead dismissing it as scrap paper. The reasoning is based on the belief that good relations with China would bring in economic benefits and that confronting Beijing will lead to repercussions. Critics, both at home and abroad, have questioned this approach as much of the promised billions of dollars in investments have yet to materialise.

As the Philippines gears up for presidential polls in 2022, the issue will surely feature in the campaigning rhetoric even if it is just political grandstanding.

After years of putting the ruling on the backburner, Duterte told the UN General Assembly last year that it “is now part of international law, beyond compromise and beyond the reach of passing governments to dilute, diminish or abandon”. But the supposed change of tack was short-lived. In May, he switched back to his earlier stance, threatening to throw the verdict “in the waste basket”.

A more forceful articulation on the importance of the ruling has come from other officials, most notably Foreign Minister Teodoro Locsin who said in June: “We firmly reject attempts to undermine it; nay, even erase it from law, history and our collective memories.” Filipinos also appeared to back a more assertive stance to the country’s claim in the South China Sea, according to a July 2020 poll reported by Reuters.

And as the Philippines gears up for presidential polls in 2022, the issue will surely feature in the campaigning rhetoric even if it is just political grandstanding. Boxer-turned-Senator Manny Pacquiao and Vice President Leni Robredo – a possible contender for the top post – have both called out Duterte for kowtowing to China.

From Beijing’s perspective, its goal of deflecting international attention from the ruling and effectively rendering the decision irrelevant has largely succeeded. To be sure, the verdict did inflict a heavy blow to the legal legitimacy of China’s expansive claims in the South China Sea, and set a precedent for other claimants such as Vietnam and Malaysia.

But the Philippines’ handling of the ruling may have, in fact, reduced the appeal for other countries to challenge Beijing on legal grounds.

For China, it also reinforced the idea that it can get away with ignoring international law when it suits its interests. Yet, it has been careful not to be seen as a rogue state in the rules-based international order, often citing differing interpretations of international law in its defence. Through state media commentary, white papers and an effective PR campaign, China has sought to discredit the tribunal ruling as a political tool to deny China’s “legitimate” rights in South China Sea.

For instance, a report about a 200 page-long “Legal Critique” published in 2020 by a Chinese think tank and an international law firm claimed that the tribunal is “not competent to determine the lawful effect of China’s nine dash line and related historic rights”.

China has also sought to muffle criticism by railing against “double standards” and what it sees as selective application of international norms. After vowing that the Communist Party will resolutely defend China’s sovereignty, President Xi Jinping is unlikely to back down and take a more accommodating approach on the South China Sea issue.

Constantly invoking the ruling and having China repeatedly dismiss it would also highlight the hypocrisy in Beijing’s self-portrayal as a benevolent, responsible actor.

Scholars have argued that there is not much the Philippines can do to force China’s compliance with the ruling. That may be true, but it can surely raise the costs for China’s non-compliance, even if Beijing can afford to bear them.

One option could be to impose sustained reputational damage on Beijing over the issue, particularly as it counters mounting international criticism over Xinjiang and Hong Kong. But the narrative has to be framed in more emotive language by highlighting the plight of Filipino fishermen who have lost their livelihoods instead of couching it in legal jargon and finer points of the law of the sea.

Further, maintaining discourse pressure by constantly invoking the ruling and having China repeatedly dismiss it would also highlight the hypocrisy in Beijing’s self-portrayal as a benevolent, responsible actor in the international system.

Another course of action for Manila could be to demand that the ruling be incorporated into the South China Sea Code of Conduct with the Association of Southeast Asian Nations – negotiations which Beijing is keen to quickly wrap up. Given the internal discord within the ASEAN, the Philippines should enhance coordination with Vietnam, Malaysia and Indonesia, all of whom have used the tribunal ruling to bolster their claims.

A new Lowy Institute survey reveals a wide range of experiences and views around the Australia-China relationship.
Peter Layton 12 Oct 2018 15:00

The army is preparing for new challenges on the battlefield. It should align it's strategy with that of the White Paper.
Chan Jia Hao 21 May 2019 13:30