When China lashed out

Lessons of the past are too readily overlooked. But Australia has walked a tightrope between clashing giants before. 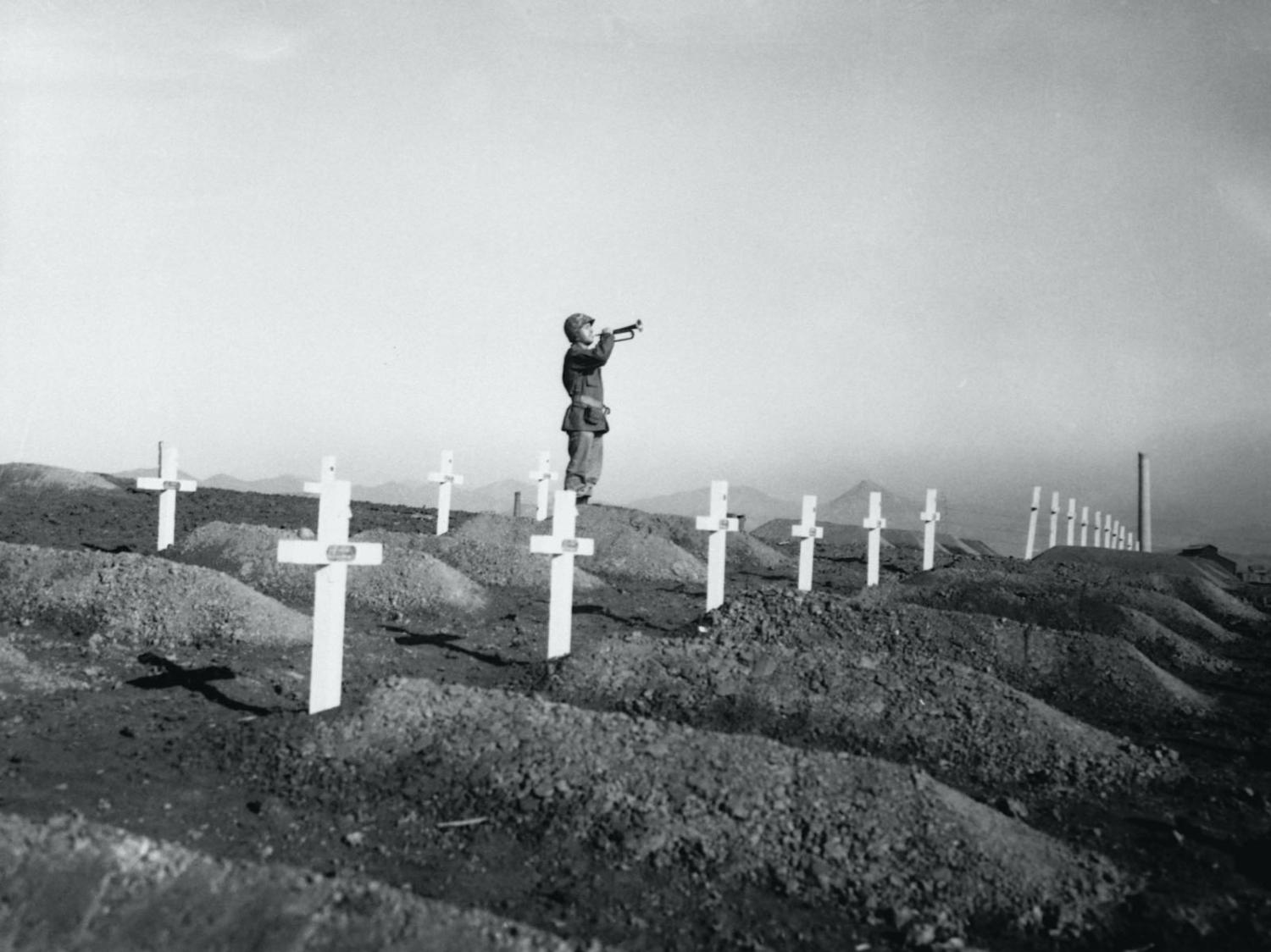 A memorial service on 13 December 1950 in Hungnam, Korea at the graves of fallen US Marines following the break-out from Chosin Reservoir (Corbis via Getty Images)
Published 15 Jun 2022     Follow @Yuan_Frank0

On the wintry night of 27 November 1950, Chinese troops suddenly descended upon the US 1st Marine Division and the 31st Regimental Combat Team around the frozen Chosin Reservoir, less than 100 kilometres away from the China-Korea border. Having failed to dissuade the United States with words from crossing the 38th Parallel and crushing its communist neighbour, China had started dispatching troops into North Korea in October. But it was only then that the military and indeed geopolitical implications materialised.

Surrounded and vastly outnumbered, the US forces at Chosin Reservoir managed to break out after two weeks of brutal fighting. But the war had turned decisively against the allies fighting in Korea under a United Nations flag. In addition to pursuing sanctions against China, the Truman administration publicly and privately mused about using the atomic bomb to stem the Chinese offensive, prompting a disconcerted British prime minister to make an emergency visit to Washington.

For an Australia of the time, here was a thorny policy thicket to clamber through. The Robert Menzies government shared British concern about escalation but did not wish to upset American opinion. Privately, the government lobbied Washington against branding China an “aggressor” in Korea through the UN General Assembly. It also instructed Australian diplomats to delay related debates and resolutions in that forum. While Australia and the UK finally gave in after nearly two months, both continued to counsel the US against attacking Manchuria or employing Chinese Nationalist forces from Taiwan. The major newspapers espoused largely similar editorial lines, condemning Peking’s drastic intervention without proscribing China as implacably expansionist, calling for firm military responses but arguing against further escalation.

Crucially, official documents since released show that both Menzies and his External Affairs Minister Percy Spender still actively contemplated recognising the People’s Republic of China and facilitating its representation to the UN, believing that those steps would help mitigate the risks in Korea. But simultaneously, the External Affairs department worked tirelessly towards what would become the ANZUS treaty.

The Menzies government was successful in walking a diplomatic tightrope: neither encouraging an escalation in the Korean War nor publicly embarrassing a superpower whose protection it sought.

Of course, 70 years later, Australia faces a different lashing out by a different China, in a very different world. In November 1950, Australian troops were somewhat distant from the most intense fighting. Today, Canberra finds itself on the forefront of Beijing’s diplomatic stoushes with numerous countries, bombarded by harsh rhetoric and punitive trade restrictions.

Yet there is an important parallel in how Australian observers understood Chinese actions on both occasions. When China launched its forceful offensive in late 1950, some saw it as the rational response of a newly established regime to salvage a crucial geopolitical buffer for its only industrial base in the North-eastern provinces. Others, such as Australia’s first ambassador to China (1941–44), Frederic Eggleston, argued that the intervention, having no legal justification because China itself had not been attacked, revealed the Chinese Communists’ adventurist or even aggressive character. The Menzies government’s cautious responses suggest that it was largely informed by the former approach, based on what is oftentimes characterised as a “realist” understanding of great power dynamics.

Similarly, China’s moves vis-à-vis Australia today have been interpreted in two ways, broadly. Some argue that Beijing is largely responding to Australian actions which it sees as detrimental to China’s international standing, commercial interest and even domestic legitimacy – consequently arguing that certain adjustments from Canberra are needed to alleviate the tension. Others contend that China is clearly behaving as a bully and that Australian sovereignty must not be traded away.

Taking the grievances of China seriously is not kowtowing to it, but the basis for avoiding a catastrophic clash.

While it is necessary to defend one’s principles, it would be dangerous to follow them legalistically. As Gough Whitlam put it, “Only the impotent are pure”. China’s massive, unilateral intervention into Korea could have been taken as the justification for retaliatory military action of the type subsequently seen in the 1991 Gulf War. This was certainly politically tempting for Truman in late November to early December 1950, though he proved cautious enough to not test the Soviet Union’s commitment to the survival of the most populous communist country and risk a Third World War.

While the situation today is much less incendiary, it is just as delicate. The economic stake in Australia-China relations is undoubtedly high, and, despite being a middle power, Australia’s actions can help exacerbate Sino-American rivalry. Indeed, delving into another historical example from the the Paris Peace Conference following the First World War, Australian Prime Minister Billy Hughes played a crucial part in the League of Nations’ rejecting the Racial Equality Proposal by Japan. Hughes might have saved the White Australia Policy, thanks to US President Woodrow Wilson’s backing, but the incident stoked Japanese nationalism and resentment towards the US, contributing to a geopolitical competition that would see Japan embarking on an explicitly expansionist path in just over a decade.

Precision and prudence matter in policymaking as much as in military operation. The proponents of a pushback against (or a realist “management” of) China need to explain what exactly such a project would involve, what the objectives are and how the geopolitical risks are manageable and justified. Also, beyond the mantra about diversifying Australia’s trade, they need to provide a credible plan for finding alternative export markets, within a reasonably short timespan, to absorb most of the Australian products that could be rejected by China.

To be sure, the logic also applies to advocates for a positive “reset” of the Australia-China relations. What are the interests involved in the relationship, and what are their priorities? How should the risks of trade restrictions and political interference be managed? And, if the Sino-American rivalry intensifies, what exactly should Australia do to avoid being embroiled in it?

The Battle of Chosin Reservoir was the tragic culmination of one miscalculation, and the basis for another. American policymakers underestimated the importance Peking attached to the Korean Peninsula. Then, after a taste of (albeit pyrrhic) victory in early December 1950, the Chinese leadership underestimated American determination and capacity to hold onto South Korea, and pushed into it. Following two major counteroffensives from the UN forces and another from the Chinese, a stalemate developed by mid-1951, lasting until the armistice agreement. If General Douglas MacArthur had stopped near the original North-South border in early October 1950, or if Chinese forces had done so later in the year, the division of Korea would not have looked much different, but hundreds of thousands of lives could have been spared.

Taking the grievances of China seriously is not kowtowing to it, but the basis for avoiding a catastrophic clash. As analyst Hugh White has noted, Australia cannot “set the terms of engagement unilaterally”, and compromise is inherent to international politics. Amid a whirlwind of events and emotions, calm and sophistication must prevail, as it did in the tense days of December 1950. And foreign policy commentators may not wish to create a political atmosphere where de-escalation becomes virtually impossible.

As well as remembering the battles that were fought, we should also reflect on the wars that were avoided.

The Games of Thrones-style struggle now underway between the stranded Trans-Pacific Partnership (TPP) and the enlivened Regional Comprehensive Economic Partnership (RCEP) is getting murkier by the day.
Susannah Patton 28 Jun 2022 15:46

Also in this week's links: Manus Island refugees, the ADB, the Solomon Islands' Child and Family Bill and the celestial integrity of Disney.