The challenge to legal abortion in the Trump era is global

Alabama’s new anti-abortion law might be extreme but resurgent attacks on legal abortion are widespread. 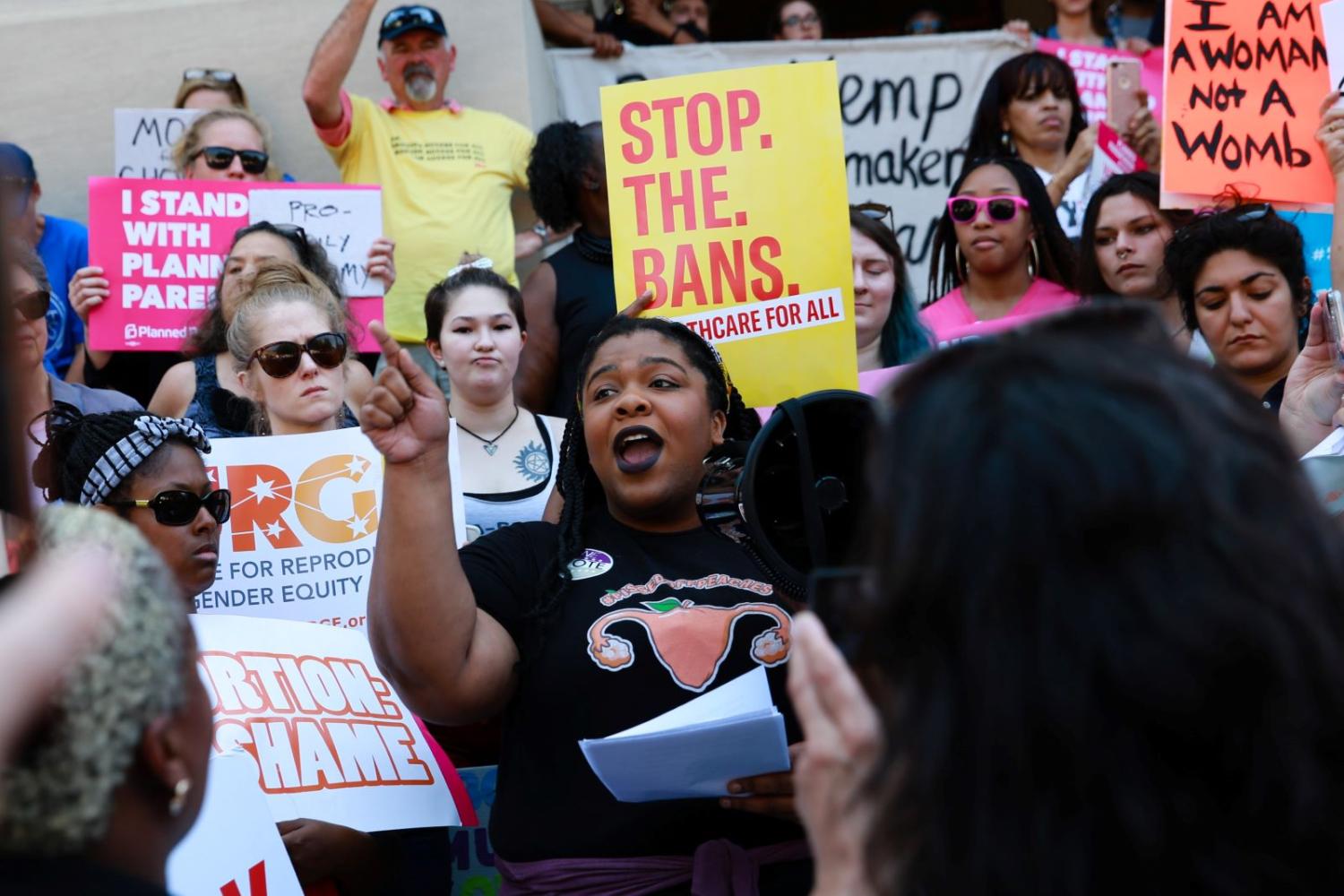 A woman speaks during an abortion rights rally in Atlanta, Georgia in May as part of rallies across the US following the Alabama law. (Photo: Elijah Nouvelage/Getty)
Published 20 Jun 2019

Last month Alabama passed a law that would imprison doctors for up to 99 years for performing abortions, with no exceptions in cases of rape or incest. Even televangelist Pat Robertson, who in 2005 suggested Hurricane Katrina could be God’s punishment for allowing abortion, has said Alabama’s new law “goes too far”.

But Robertson’s complaint was more strategic than compassionate. The purpose of Alabama’s new law, like similar bills recently passed in Louisiana, Georgia, Missouri and Ohio, is to challenge Roe v Wade in the Supreme Court.

Alabama’s law is so blatantly unconstitutional that it would have little chance of making it to the Supreme Court, let alone winning there.

Alabama’s law is so blatantly unconstitutional that it would have little chance of making it to the Supreme Court, let alone winning there. Other laws may have a better chance of chipping away at the framework that keeps abortion legal for American women. Even if it stays legal, various states have for years been making access to abortion as difficult as possible.

Abortion is a pervasive issue in American politics even when it isn’t making headlines. Since the Roe v Wade decision in 1973, it has replaced racial segregation as the most emotionally charged issue at stake in control of the Supreme Court.

Roe struck down state bans on abortion because they violated a constitutional right to privacy. At the time, many evangelical Christians agreed with the decision, and were suspicious of the overwhelmingly Catholic pro-life movement.

However, as conservatives of all stripes migrated to the Republican Party, especially in the South, Ronald Reagan forged a powerful coalition of traditionalist Protestants and Catholics, united by opposition to abortion, feminism and the nascent gay rights movement. The 1980s also saw the rise of the conservative legal movement within the judiciary and legal profession, which aimed at countering the “liberal legal network” that had successfully used litigation to advance liberal goals in the postwar decades.

Ever since, conservatives have hoped for Republican-appointed Supreme Court justices to overturn Roe. This raises the stakes of every presidential election. Donald Trump got a huge boost in the 2016 election when Senate Republican leader Mitch McConnell refused to allow Barack Obama’s nominee for the Court, Merrick Garland, to face confirmation hearings, saying the next president should appoint the next justice. This gave conservatives something to vote for.

Trump barely tried to convince anyone of his Christian bona fides, but he promised to fight for Christians and appoint pro-life justices. So far, his two Supreme Court appointments and his own violent rhetoric about abortion have entrenched his support among the evangelicals who will be vital to his re-election chances.

For Democrats, support for women’s rights to abortion is an important litmus test for would-be presidential candidates. Joe Biden, who is trying to appeal to more conservative voters, was forced to reverse his long-standing support for the Hyde Amendment, which prohibits federal funding for abortion.

Elizabeth Ingleson shows how pro-life activists in the United States have reframed the abortion debate using non-medical terms like “partial-birth abortion” that are found nowhere else in the world. But the United States is not alone with its resurgent anti-abortion movement.

Abortion bans appeal to right-wing nationalists in central and eastern Europe who combine traditionalist religion and hostility to feminism with racialized paranoia about low birthrates. In 2016, Poland’s ultra-conservative Law and Justice party (PiS) attempted to impose a full abortion ban with the support of the Catholic Church. There were marked similarities with recent American laws. The ban was so extreme that even “suspicious” miscarriages could be investigated, which is also a potential effect of Georgia’s new law. And like the new American laws, they did not reflect majority opinions, which in Poland and in all American states are opposed to full abortion bans. Massive “Black Protests” led by women’s rights groups derailed the 2016 ban, but PiS has not given up.

The most restrictive anti-abortion regimes are found in the developing world, and especially in Latin America, where three-quarters of abortions take place under illegal, often unsafe circumstances.

Donald Trump, like every Republican president since Reagan, has implemented the Mexico City Policy (also known as the “global gag rule”) prohibiting US aid funding to groups that provide advocacy of or information about abortion. This affects many NGOs involved in family planning and women’s health worldwide, and Trump has expanded it to include the UN Population Fund and the Organization of American States. Just as the Hyde Amendment denies safe and accessible abortion to the Americans who can least afford it, so the global gag rule imperils women in poverty around the world, and particularly on America’s doorstep.

The headline-grabbing new laws in Alabama and other states will face legal challenges and may never take effect. But the challenge to safe, legal abortion in the Trump era is global, and it won’t end with Trump.

Previous Article
The limits of unilateral action against Iran
Next Article
Economic diplomacy: G20 warms up, the China drip and open trade talks

New Zealand could change to a strategic “front line” if geopolitical competition in the South Pacific hots up.
Alexander Harper 8 Feb 2018 12:30

The meltdown contributed to the Soviet Union’s collapse but may have also cost a chance to employ low-carbon energy.