Keeping the Kremlin in the Kelvinator

A flurry of enthusiasm to re-engage Russia speaks more to Western insecurities than future power dynamics in East Asia. 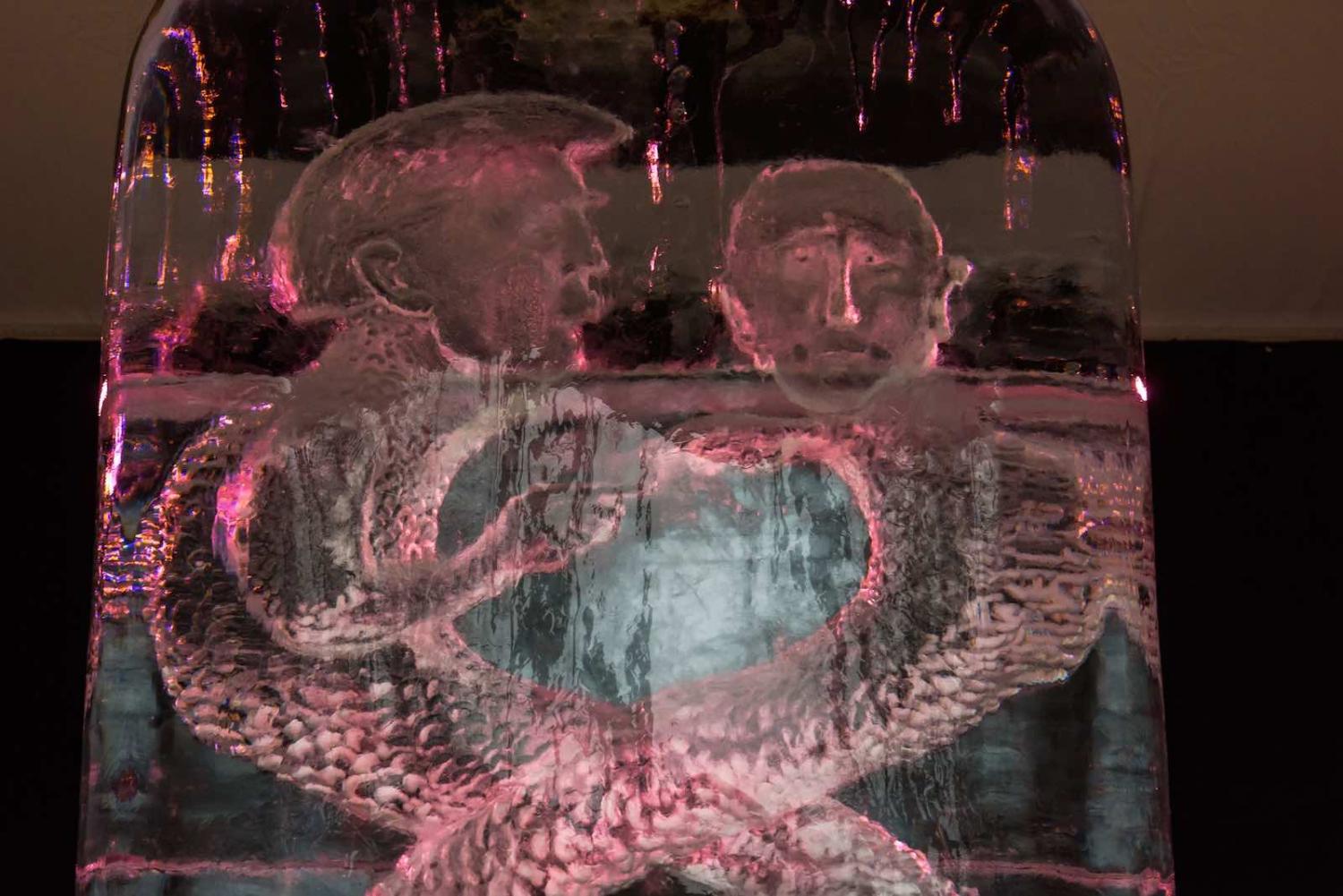 The ice sculpture “Genie in a bottle” by Kestutis Musteikis and Vytautas Musteikis from Lithuania during a festival in Jelgava city, Latvia, in February (Gints Ivuskans/AFP/Getty Images)
Published 10 Jul 2020     Follow @matthew_sussex

One effect of Australia’s more assertive posture on the People’s Republic of China has been to try to split off Beijing’s current and potential partners. This thinking was apparently behind Liberal MP Dave Sharma’s recent suggestion that Australia should back Russia’s participation in the upcoming G7+ summit. It was also visible in Matthew Dal Santo’s call to defrost the relationship because Russia had been pushed into Beijing’s orbit by Western marginalisation.

While this view does resonate with what Russia has suggested it would like to see from the West, re-engaging with Moscow currently makes no strategic sense. Put simply, the schisms between Russia and the West are now too wide for iterative “baskets of cooperation”, and they are too deep for comprehensive rehabilitation. Calling for a return to “realism” on Russia is therefore a clumsy attempt to reverse-engineer the Sino-Soviet split: a kind of 21st century geopolitical Hail Mary.

First, it is difficult to see how Russian and “Western” interests (inasmuch as we can claim the West has broadly uniform interests) might intersect to justify re-engagement, for either side. There are few indications Russia is serious about rapprochement. And the Russia-US relationship is likely to worsen before it improves. With a Biden victory in the November presidential election now likely, domestic pressure for a harsher American line on Moscow will dovetail with the desire to turn around the sharp decline in US global standing.

The task of managing Russia, which seeks to tear down the existing order, is much better left to the PRC, which only seeks to supplant it.

Australia and Russia also have few interests in common. The two countries are trade competitors, especially over energy, and that competition will accelerate in future. Canberra has proclaimed support for a regional order that Moscow regards as tattered. In Russia’s view, that puts Australia on history’s losing side. Indeed, Vladimir Putin concluded some time ago that the liberal project was moribund. Fragmenting the West was the best way for Russia to marginalise what it saw as the NATO threat, buying time to pivot to Asia as the new locus of global power and wealth.

Russia has pursued that objective virtually unchecked. It has encouraged US and European societal divisions, meddled in elections, contributed to the European refugee crisis through its role in the Syrian civil war, stoked anti-immigration and anti-EU sentiment, seized Crimea, fragmented Ukraine, embarked on massive military modernisation, and treated Britain as a playground to poison dissidents by exotic means. Until Donald Trump gave it some competition, Russia was the world’s chief amplifier of fake news, and its chief spoiler in multilateral forums associated with the US-led order.

Twenty years ago, scholar Kenneth Waltz noted that NATO members were re-creating bipolarity, shifting the boundaries of competition eastwards. But the West has been reluctant to accept its choices. The EU’s response to Russian muscularity has been only marginally better than supine. It has sought to avoid the costs of Russo-European competition, building a narrative around soothing messages that obscure its free-riding, while German overdependence on Russian gas watered down the EU’s sanctions regime. Robust US responses have been stymied by Trump’s chaotic presidency, and were plagued by half-hearted attempts to “reset” the relationship before that.

Absent economic and normative rationales for re-engagement, we are left with strategic convergence. And on that score, Russia simply does not yet see China as a deep threat to its interests.

In fact, Russia now sees the West as negotiating from a position of weakness, which means any cost of re-engagement will be higher. The Kremlin is largely uninterested in one-off seats at symbolic tables, and is unlikely to seriously undermine Sino-Russian ties at a G7+ meeting. The Russians are realists too, and chiefly seek a zone of influence over the former Soviet space: a price that would be – should the West pay it – a stunning backflip, interpreted in Moscow as a sign of even deeper frailty.

Superficially, then, it is true that the West has pushed Russia towards China. Yet this has also been a conscious decision by Moscow. It is wary of being wedged between the EU and China, and ideally seeks a pivot role in the Euro-Pacific. Certainly some of its behaviour, such as courting Vietnam over energy exploration, as well as seeking alternatives to the Belt and Road Initiative via the Koreas and the Arctic, risks Beijing’s ire. But it has also doubled down on Sino-Russian ties by facilitating BRI routes through the Meridian Highway linking Kazakhstan and Russia, and deepening interoperability with the People’s Liberation Army via joint exercises.

The recent flurry of enthusiasm for re-engaging Russia therefore tells us more about Western insecurities than future power dynamics in East Asia. That’s why the task of managing Russia, which seeks to tear down the existing order, is much better left to the PRC, which only seeks to supplant it.

In fact, China increasingly has both the incentive and – crucially – the means to moderate Moscow. It dominates the relationship’s major headline items: institutionally, on development assistance, and increasingly on military-security affairs. Russia is increasingly compelled to participate in the BRI on China’s terms, even as Beijing develops deeper leverage in Central Asia and Russia itself.

This has blunted Russian attempts to foster Chinese energy dependence, undermined Moscow’s local primacy, and provided Beijing with geo-economic flexibility through energy and connectivity alternatives. Alongside the broader dynamics of Sino-US competition, China has also effectively constrained Russia’s military and trade strategy in Asia, relegating it to commercial opportunism. And Russia’s limited capacity to secure its wider Asian interests militarily locks it into a second-tier bandwagoning posture.

Ultimately the West is going to have to live with its choices – and an icy relationship with a weak Russia in Asia is likely to be one of them. Whereas there may be limited opportunities to nudge Russia to irritate Beijing, the opportunities as well as the strategic rationales and mutual incentives for re-engagement dissipated some time ago. And while that may be cold comfort for those who worry about a Sino-Russian axis, the reality is that China today is much better placed to engage Moscow – and manage it – than the West has proved to be.

Previous Article
Stoking the fire of Asia-Pacific missile proliferation
Next Article
India-China conflict: A move from the Himalayas to the high seas?

The Philippines and the wider region must engage and enable grassroots moderates. It must start in Marawi.
Cornelia Tremann 21 Sep 2018 12:00

Beijing seeks to polish its global brand through efforts in Africa and a willingness to cooperate, but more is needed.
J. Michael Cole 23 Mar 2017 08:40

The spectre of American retrenchment creates incentives for potentially exposed weaker states to increase their collaboration on regional security.