Limitations in the established rules and forums have led the region to innovate. 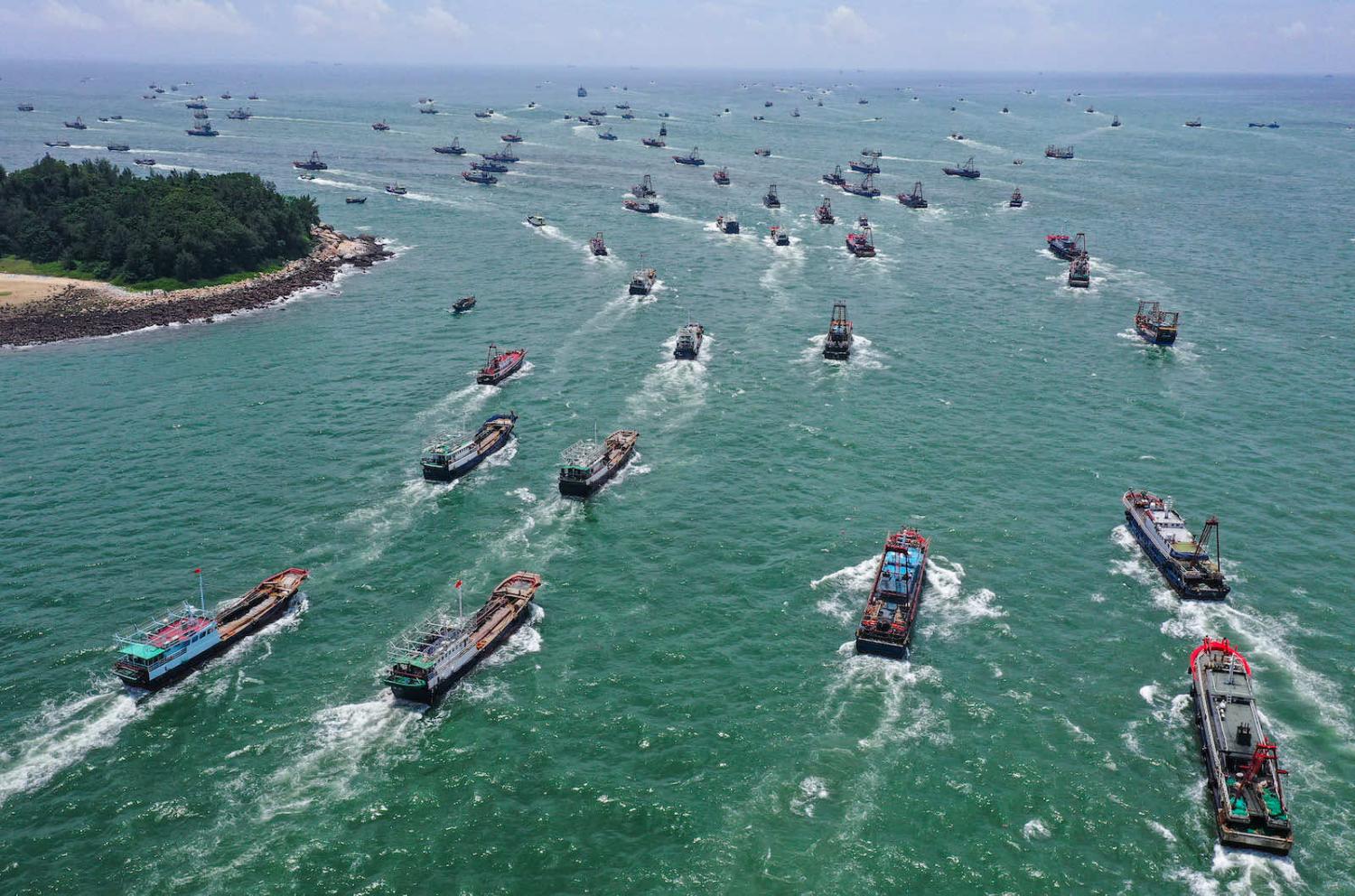 Boats setting sail for fishing grounds in August 2021 from Yangjiang, Guangdong province of China, after a fishing ban in the South China Sea was lifted (Liang Wendong/VCG via Getty Images)
Published 4 Apr 2022

The Indo-Pacific maritime security order consists of international treaties, multilateral diplomatic forums and, increasingly, minilateral security initiatives. The first two are under stress due to China’s assertive behaviour in the maritime domain and have led to the formation of the latter.

The principal treaty underpinning the rules-based global maritime order is the 1982 UN Convention on the Law of the Sea (UNCLOS). A product of the Cold War, and the consensus of over 100 developed and developing countries, UNCLOS contains ambiguities and imperfections. But it remains the single most important treaty governing maritime norms, rights and responsibilities.

In the Indo-Pacific, UNCLOS has been eroded by China’s actions, especially in the South China Sea. The biggest problem is China’s expansive jurisdictional claims denoted by its “nine-dash line”. In 2013, the Philippines challenged those claims under UNCLOS dispute resolution procedures and won: in July 2016 an arbitral tribunal ruled that the nine-dash line was incompatible with UNCLOS and that China’s actions had violated the Philippines’ sovereign rights in its exclusive economic zone (EEZ)–and by extension the sovereign rights of the other Southeast Asian claimants, Brunei, Indonesia, Malaysia and Vietnam. China not only refused to participate in the legal proceedings but also rejected the award and has continued its unlawful activities in Southeast Asia countries’ EEZs ever since.

Although the United States has repeatedly called out those unlawful activities, because it has not ratified UNCLOS, China has accused Washington of hypocrisy. Unfortunately there seems little prospect that the United States will ratify UNCLOS any time soon.

Equally unlikely is the international community convening to revise, refine and renovate UNCLOS to resolve those ambiguities, strengthen adherence and take into account new challenges such as climate change.

The chances that Beijing will alter its behaviour and renounce its so-called “historic rights” in the South China Sea are vanishingly small.

The maritime states of Southeast Asia are firm believers in the importance of UNCLOS, because in theory international law levels the playing field between large and small countries.

ASEAN and China are currently negotiating a code of conduct for the South China Sea. There is much the 11 parties agree on – at least rhetorically. But China has inserted several problematic provisions into the preliminary texts designed to promote its nine-dash claims and undermine the arbitral tribunal’s award.

It is imperative that the five Southeast Asian claimants coordinate their positions in the code of conduct talks and present a united front in defence of UNCLOS. Indonesia’s call in December 2021 for a meeting of the five states plus Singapore to discuss the situation in the South China Sea is an encouraging first step, though it remains to be seen whether it signals that Jakarta is finally willing to assume a leadership role.

ASEAN itself has highlighted the importance of maritime security for decades. However, ASEAN-led forums have not been very efficacious. The ASEAN Regional Forum has failed to enact effective confidence-building measures let alone preventive diplomacy and conflict resolution. The East Asia Summit is too high-level to produce detailed agreements. And although the ASEAN Defence Ministers’ Meeting Plus has promoted the use of the Code for Unplanned Encounters at Sea (CUES) during naval exercises, the agreement is voluntary, does not cover coast guards and there have been lapses between practice and implementation.

Due to the limitations of ASEAN, countries have formed minilateral security initiatives which are more flexible, informal and targeted than larger multilateral forums.

Southeast Asian countries have established minilateral security initiatives to deal with the problem of piracy and sea robbery in the Straits of Malacca and the Sulu-Celebes Seas. Thailand and Laos have joined with China to conduct coordinated patrols in the Mekong River to counter maritime criminals. The three initiatives have been relatively successful, and aside from sensitivities over sovereignty, have been uncontroversial.

More controversial are the Quad (Australia, India, Japan and the United States) and AUKUS (Australia, United Kingdom and United States). Both minilaterals were established in response to the perceived threat of a rising China. The Quad is not yet a letter-head organisation, and AUKUS is primarily a technology-sharing agreement. Both may yet evolve into something else. Other regional states may plug in and play on an ad hoc basis, but Southeast Asian countries will be wary of antagonising China and undermining the concept of ASEAN centrality by actively endorsing them. Yet at the same time, due to concerns about China, they will not actively oppose them.

The chances that Beijing will alter its behaviour and renounce its so-called “historic rights” in the South China Sea are vanishingly small.

Southeast Asian countries are not without influence and agency, and understand well the costs to their economies and strategic autonomy if they recognise China’s claims. Countries such as the United Kingdom and Australia can provide succour, if done sensitively and in a coordinated manner. The provision of hardware such as radars, drones, surveillance aircraft and patrol boats would help regional states improve their maritime domain awareness. This would allow the Southeast Asian claimants to draw attention to China’s violations of UNCLOS. The sharing of best practices with regional navies and especially coast guards would also be beneficial.

Australian and British universities are also well-placed to offer courses and workshops to Southeast Asian officials, postgraduate students and security practitioners on the importance, essence and complexities of UNCLOS–both to highlight regional states’ rights and disabuse Southeast Asians of China’s insidious narratives concerning its “historic rights” in the South China Sea and wrongful interpretations of the law of the sea.

The Kremlin may be tiring of the impasse in eastern Ukraine

In upping the ante, Putin might see a chance to break the deadlock while Europe is distracted and the US preoccupied.
Bruno Tertrais 26 Mar 2017 15:13

After Brexit and Trump, the French election surprise(s)

The 2017 presidential election is already the biggest political rollercoaster since the birth of the Fifth Republic in 1958.
Claire Rogers 21 Mar 2018 12:00

The most overcrowded refugee camp on the planet has more than twice the population of Canberra crammed into an area the size of beachside Victorian town Sorrento.