Despite abandoning attempts to make same-sex relationships a crime, the politics around the LGBT community remains a flashpoint in Indonesia. 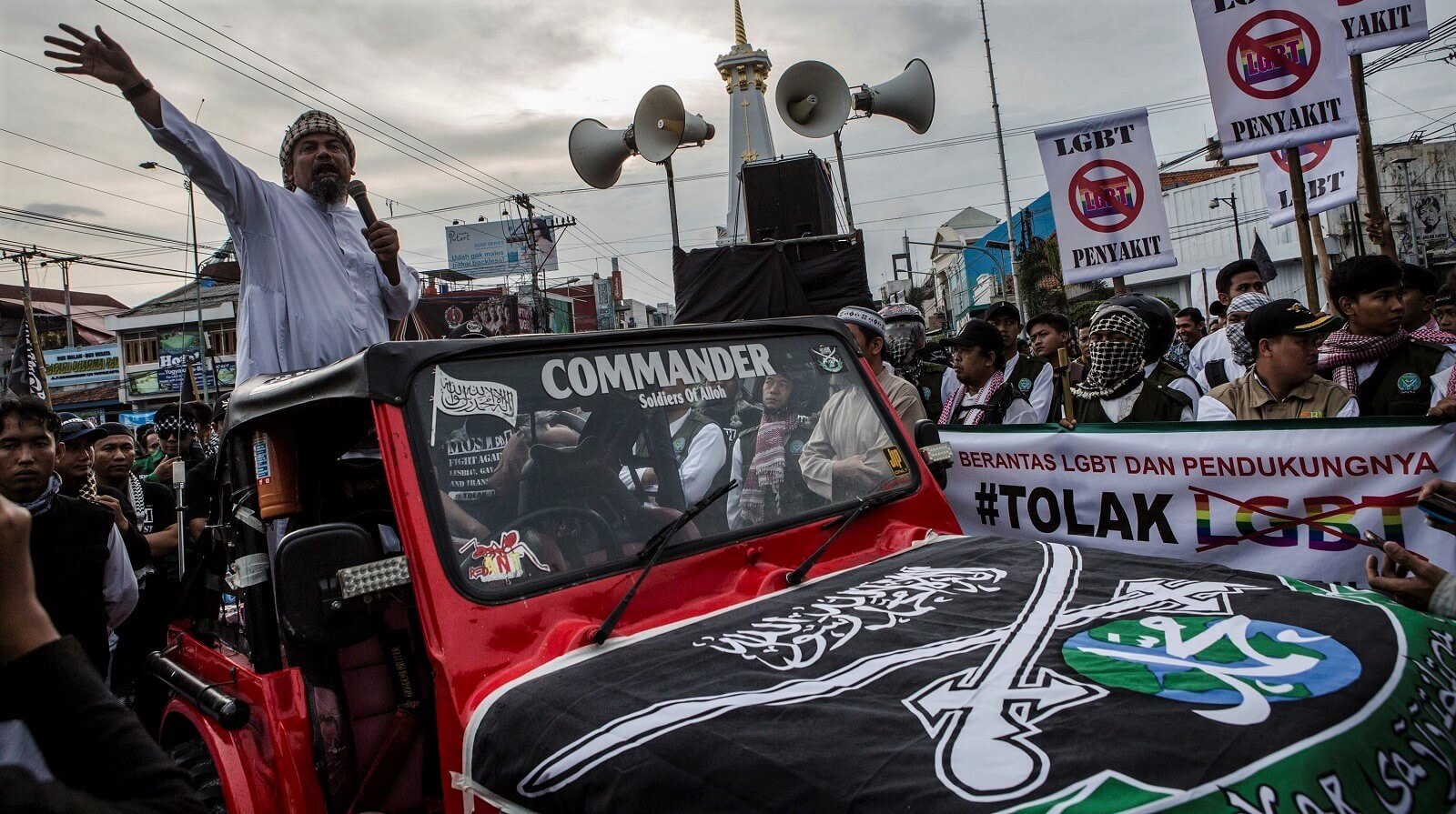 Last month, Indonesia’s lesbian, gay, bisexual, and transgender (LGBT) community was buoyed by a decision to remove the phrase “same-sex” from the article on fornication in the proposed Criminal Code (KUHP) bill, amid a raft of contentious legal changes that have sparked much debate. The decision showed there’s still a shred of decency in the country.

The resolution was arrived at after several prominent civil organisations criticised the phrase, and followed six months of tension in the parliament, with human rights defenders arrayed against the government and Islamic parties. Eventually, the government conceded that including the phrase would discriminate against the LGBT community.

Yet it remains far from clear whether this backdown marks a win for the LGBT community in Indonesia, or just a distraction. Over the past two years, the LGBT issue has been used as a political weapon in efforts to seize voters’ support in local elections. Ahead of the upcoming national election in 2019, there is every risk the issue will be used in this way again.

The proxy LGBT war began after a leaflet on sexual consultation went viral and made headlines in January 2016. The Support Group and Resource Center on Sexuality Studies of the University of Indonesia (SGRC-UI) that produced it was accused of being a community “group shelter” for LGBT individuals.

This event was quickly followed by warnings from Vice President Jusuf Kalla about UN Development Program funding for LGBT campaigns in Indonesia. One NGO worker told me it has become common for Indonesia to ban international funding of LGBT issues, Papua, and the 1965 anti-communist crackdown – the three most sensitive issues in the country. The government even sought to have messaging apps such as WhatsApp remove emojis seen as linked to LGBT issues, although this was mostly ignored.

Then, at a dark point in the LGBT panic that seized Indonesia in 2016, came protests that forced the closure of Pondok Pesantren Waria Al-Fatah in Yogyakarta, a sanctuary for waria (transgender people), self-described as having the body of a man but the soul of a woman. Shinta Ratri, founder of the pesantren, told me during a commemoration event in February that it was the first time a demonstration had been so organised. “Before that,” she said, “only individuals complained to us.”

The pity of it all was on display in Yogyakarta. I observed a religious group that claimed to promote tolerance, yet attacks directed at the LGBT community are portrayed as amar maruf nahi munkar (commanding good and forbidding evil, to save the people from sin).

These events, however, were only the beginning of the campaign against LGBT Indonesians.

The hate has increased, and not only from vigilante religious groups. The LGBT issue was used by politicians to demand the attention of the Indonesian religious majority, actions the Jakarta Post described in an editorial as “The politics of gay-bashing” and Human Rights Watch documented as ignorant homophobia.

Even Ridwan Kamil, Mayor of Bandung and one of the most favoured local politicians in Indonesia, disappointed many by not supporting the LGBT community when he declared:

Sexual preferences should be a private matter and cannot be exposed or campaigned about publicly because there are social behaviours that are not acceptable in Indonesia.

In 2017, the campaign against the LGBT community shifted to physical intrusions into people’s private lives.

The raid of a gay couple’s home by a vigilante moral group in Aceh in March was followed by at least four similar incidents: a raid at a gay party in Surabaya; the arrest of more than 140 men at an alleged gay sauna party; the arrest of five alleged lesbians in Medan; and the eviction of 12 women from their homes in West Java, based on prejudiced assumptions of their sexual identity.

Then came the campaign to challenge morality articles within the criminal code. In May, a religious group calling themselves the Family Love Alliance (AILA) filed a petition to make premarital sex and same-sex relationships punishable by up to five years in prison – a petition eventually rejected in the courts.

In 2018, conservative groups, including the Islamic Prosperous Justice Party (PKS), confidently brought an anti-LGBT campaign to the parliament, seeking a change to the criminal code. The irony of a morality campaign was rich, given a former PKS chairman was jailed in 2013 for corruption, and another PKS member was caught on camera looking at pornographic images on his tablet in parliament.

The attempts to outlaw the LGBT community sparked an opposition campaign by human rights activists and the wider community that led to an eventual government backdown. But efforts to discriminate against the LGBT community continue, particularly at the local level.

The Depok administration in West Java, for instance, has formed an anti-LGBT special force, to “limit the presence of the LGBT community in the city”, according to the mayor. Human rights monitors have reported similar instances of discrimination, from Aceh to Kalimantan. Just over a week ago, in West Java, another instance of mob harrassment of two trans women was reported.

While the government backdown to remove the phrase “same-sex” from Indonesia’s criminal code bill has been welcomed as progress, work to protect LGBT Indonesians is far from over. Human rights activists suspect the hate campaign will develop into attempts to include anti-LGBT provisions in changes to broadcasting and national security provisions.

Indonesia’s LGBT community also holds out hope that President Joko Widodo will eventually break his silence on the issue, making a bold statement to protect the LGBT community as a minority within Indonesia.

But even the best designed measures to protect the LGBT community will founder if homophobic politicians see political reward in vilification. How many politicians really “understand” the difficulty of being LGBT? Perhaps they are well educated, but not open-minded and brave enough to speak up to support minorities.

The real hope is for a stop to the political gay-bashing in Indonesia.

Show 1 Comments
Previous Article
Time for reason, not emotion, in the “China influence” debate
Next Article
Cambodia: the unfree press