The supposed “premier forum” has by and large failed to rise to hopes of a broader mandate. 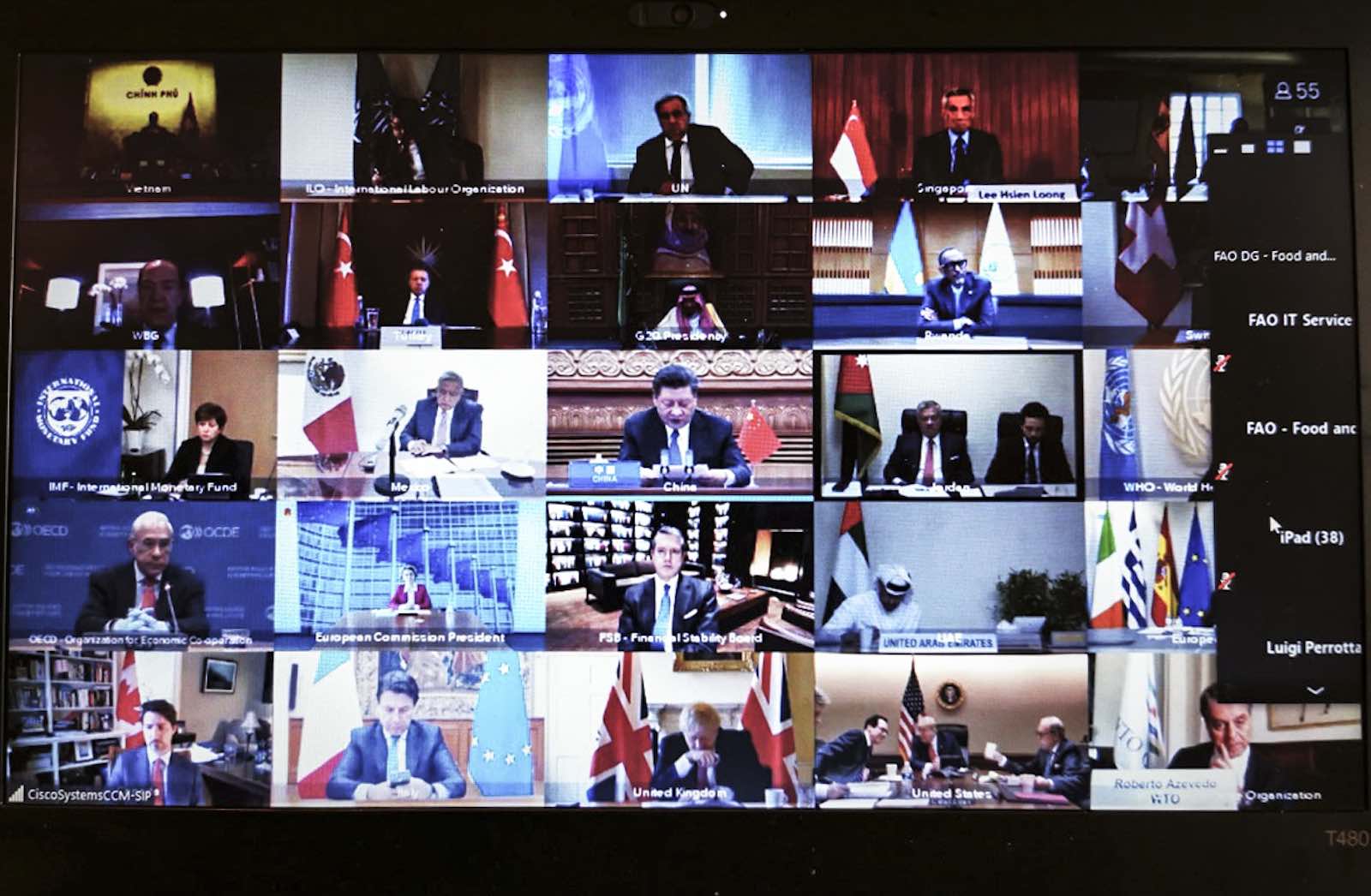 As the Covid-19 pandemic deepens, the need for international cooperation to deal with the twin health and economic crises has been highlighted. While much is made of the failings of the World Health Organization, other international bodies have fared no better. In particular, the G20 – which styles itself as the “premier forum for international economic cooperation” – has been largely missing in action. Comprising the world’s 20 largest economies, the G20 should be the natural forum to devise and steer the global response to the twin crises.

This is especially so given its success in responding to the previous global crisis: the 2008–09 Global Financial Crisis (GFC). Back then, the G20 was transformed from an obscure gathering of finance ministers into the main forum for crisis management, which devised a timely and effective policy response to the crisis. Its particular strength was its informal nature, which enabled networks of technocrats, officials and bureaucrats to bypass gridlocked international organisations to avert a global depression. Since then, the G20 has evolved from a crisis committee to steering committee, facilitating international cooperation on a broad array of issues, from health to development to women’s economic participation. Accordingly, the current crisis has led to widespread calls for the G20 to step up once again.

When they finally convened on 26 March, the G20 leaders promised to do “whatever it takes to overcome the pandemic”, but their communique lacked concrete commitments.

And yet, its response to date has been limited and tepid. It was largely on the sidelines early in the year, with a 7 March meeting of its Health Working Group concluding with a one-page statement with no concrete commitments or plans for action. It took calls by former leaders such as Kevin Rudd for the G20 to even acknowledge the need for a formal leaders’ summit.

When they finally convened on 26 March, the G20 leaders promised to do “whatever it takes to overcome the pandemic”, but their communique lacked concrete commitments, and their promise to inject $5 trillion into the global economy consisted of already-announced domestic measures. Moreover, there was no mention of reversing export bans of medical equipment, funding a vaccine, or addressing the economic crisis brewing in the developing world.

While the recent meeting of G20 finance ministers produced more concrete outcomes – namely a suspension of bilateral debt repayments for low-income countries – there was no new actions on health crisis, and no response to International Monetary Fund pleas to bolster its resources. As former US Treasury Secretary Larry Summers put it afterwards: “I had modest expectations, which were significantly disappointed.”

The roots of this failure to rise to the challenge of Covid-19 stem from both the nature of the G20 itself, and the broader international context in which it operates.

Firstly, despite its broader focus, the G20 remains at its core an institution concerned with finance. True decision-making power lies in its “Finance Track” – which brings together finance ministers, central bank governors and officials – rather than the “Sherpa Track” where all other issues are discussed. This was key to its successful response to the GFC, and also explains why its most concrete actions in the current crisis – such as the debt suspension – have been in finance, as technocrats respond to threats to financial stability. A financial focus, however, means neglect of issues such as health, which are seen as outside the purview of financial policymakers. The expansion of the G20’s remit always sat uncomfortably with the continuing centrality of the Finance Track, and has been highlighted by the current crisis.

This does not mean that the G20 lacks participation from a broader array of stakeholders. Indeed, the past decade has seen the institutionalisation of “engagement groups”, integrating civil society actors into the G20 – including NGOs, unions, women’s groups, academics and business associations – in the hope they will bring a more diverse perspectives to its agenda.

These groups have lobbied the G20 to take a holistic view of the crisis, including seriously addressing its health dimensions and going further on issues such as debt. And yet, their calls have largely fallen on deaf ears. Whilst the engagement process facilitates the participation of civil society in the G20, its terms are set by G20 officials, who often treat it as an opportunity to solicit “buy in” to their policy priorities, rather than meaningful deliberation. In this context, civil society resorts to issuing statements from the sidelines, with little effect.

The third reason for the G20’s failure stems – paradoxically – from its networked nature. Much has been made of the effectiveness of the informal institutions of the G20, in particular its ‘troika’ presidency, which brings together officials from the previous, current and future leadership countries, negating the need for a formal bureaucracy and secretariat.

As commentators have pointed out, this year’s troika was not well positioned for action, consisting of Japan, which was focused on preserving showpiece events such as Olympics, Saudi Arabia, not known for its diplomatic activism, and Italy, the European country most ravaged by the crisis. Yet the broader point is that crisis situations require action and initiative, which can only come from leaders.

This is not to suggest that their mere presence is sufficient. Indeed, the current context is characterised by populist leaders rejecting the very need for global governance and international cooperation. This populist backlash stems from the secular stagnation of the global economy since the GFC, as the underlying causes that led to the crisis – inequality, stagnating wages and social mobility and growing precarity – remain unaddressed. The G20 is not free from responsibility for this, struggling since 2010 to devise meaningful solutions. As a result, confidence in the efficacy of international cooperation has declined further, with the G20 largely gridlocked along North-South lines. In this context, it’s not surprising that the response from G20 leaders has been to further pull up the drawbridges and engage in beggar-thy-neighbour policies.

In short, the G20’s failure “to demonstrate the power of global cooperation” stems both from its own nature and the broader international context. There seems little hope for a sudden change of course, either for an effective response to the health crisis or a bold new agenda to address the economic crisis, even before the “Great Lockdown”.

Show Comments
Previous Article
The case for the World Health Organisation
Next Article
Europe hasn’t fallen for China – if anything, it’s the opposite