With plumes of black smoke at times issuing from its engines, Russia’s only aircraft carrier, the 55,000-ton Soviet-era Kuznetsov, arrived off the Syrian coast at the head of an eight-ship flotilla earlier this month. According to Russian media reports, Sukhoi SU-33 fighter jets from its complement bombed rebel positions in Syria’s Ildib province a few days later. Around the same time, US President-elect Donald Trump aroused consternation on both sides of the Atlantic when he confirmed in his first interview of his intentions to transfer the focus of US operations in Syria away from the overthrow of Assad and to seek an alliance with Russia against Islamic State.

While the Kuznetsov is drawn from the Northern Fleet, it is Russia’s Black Sea Fleet and a Caspian Sea flotilla based at Astrakhan at the mouth of the Volga that have so far played the central role in connection with Syria.

Prompted by the eastward expansion of NATO and the EU, the Black Sea Fleet (part of Russia’s Southern Military District) has in recent years undergone an intensive construction program, with submarines being a top priority. Though Russia cannot prevent NATO ships from navigating the Black Sea, it regards the presence of a Western fleet as a threat to Russian security. Being especially difficult and resource-intensive to locate for a naval force, submarines offer Moscow an effective way of balancing the West’s expanded naval presence on what was during the Cold War more or less a Soviet lake. With the exception of Turkey, NATO countries on the Black Sea littoral (Romania and Bulgaria) either do not possess or have very poor technology for finding submerged submarines.

Russia’s original ambition was to build an entirely new (‘Lada-class’) submarine, but recurring delays have seen it resort to building a modernised version of the older Kilo-class submarine. Thus, in 2014 the Black Sea Fleet received the first of six new submarines, with an expectation of continuously receiving the remaining up until 2020. Such vessels allow Russia to demonstrate both power and surprise.

Russia is also constructing six new corvettes of Buyan-M Class for delivery to the Black Sea Fleet by 2019. Their relatively small size (less than 1,000 tons) means that they are not designed for employment far from their home ports (such as in longer trips to either the Atlantic or Indian Oceans). Rather, their aim will be to contribute to Russia’s balancing of NATO and the EU in the Black Sea.

Though maintaining a favourable balance of power in the Black Sea has thus been the main concern guiding the fleet’s modernisation, if economic considerations allow the Black Sea Fleet will in coming years receive warships capable of maintaining a permanent Russian fleet presence in the Mediterranean Sea and further into the Atlantic and Indian Oceans. The priority is none-the-less clear: given NATO’s Black Sea presence, the defence of Russian coastal areas must come first.

But even at its current stage, the modernisation programme has enhanced the fleet’s ability to complete operations, and project Russian power, beyond the shores of the Black Sea. Russia’s intervention in Syria from October 2015 is significant as the first such operation.

Initially, the task assigned to the Black Sea Fleet was protecting Russian supply vessels on their way to and from Syrian ports. But another important element of the programme has been the acquisition and deployment of (for Russia) new missile technologies.

Thus, on 7 October 2015, the Caspian Flotilla fired 26 Russian cruise missiles at targets in Syria. The same flotilla fired a further round of 18 missiles in November (the ships from which these missiles were fired are similar in type to the Buyan-M Class corvettes, mentioned above, a fact which gives a good indication as to the new ships’ intended purpose.) And in December the Black Sea Fleet’s newest submarine, Rostov-on-Don, fired four cruise missiles from a location in the Mediterranean Sea while submerged.

Within little more than two months, Russia’s Black Sea Fleet thus demonstrated that it could hit onshore targets at a range of up to 1,600 km from the coast. At the same time, Russia strengthened its maritime deterrence by deploying the new Kalibr missiles – a capability the Russian fleet had thus far not possessed. Such operations have had an element of ‘gunboat diplomacy’ about them.

Russia has not until recently possessed cruise missiles and could have used other, pre-existing assets to hit the same targets. For that reason the cruise missile attack against the Islamic State should be considered as much a strategic act directed toward Russia’s neighbours as a purely tactical attack on Islamic State.

By using the Caspian Sea flotilla to launch its first cruise missile attacks against Syrian targets, Russia sent a clear signal to its southern neighbours (especially the former Soviet republics of Azerbaijan in the Caucasus and Uzbekistan and Turkmenistan in Central Asia, with which Moscow entertains difficult relations) of its renewed ability to project power over a long distance and with great accuracy.

Politically, the message was a warning for them to not get carried away by ambitions (if they still had them) for closer integration than already exists with either the EU or NATO.

Though the Syrian operations represent the first extra-regional conflict Russian forces have been involved in since the collapse of the USSR, it’s significant that domination of former Soviet space that is still  (and perhaps inevitably, given the geography) seen by Moscow as key to making good Russia’s claim to its status as a great power.

The other goal of the modernisation programme has been to increase both the naval power at Moscow’s disposal in its Southern Military District and Moscow’s ability to bring that power to bear in nearby regional conflicts where Russian interests are at stake.

After decades of retreat, the Kuznetsov’s arrival symbolises Russia’s return to the waters of the Mediterranean. At a minimum, Moscow’s aim with its main tool in prosecuting this task (its reinvigorated Black Sea Fleet) is to challenge NATO sea power in the Black Sea. But it’s also a political tool to be used alongside economic and diplomatic instruments to reassert Russian power and influence along the whole sweep of its long, and historically troubled, southern frontier. 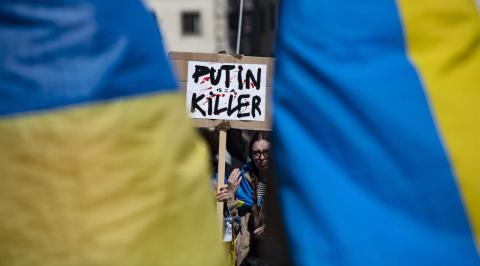