The US withdrawal was telegraphed months beforehand, but the speed of the Taliban advance still came as a shock. 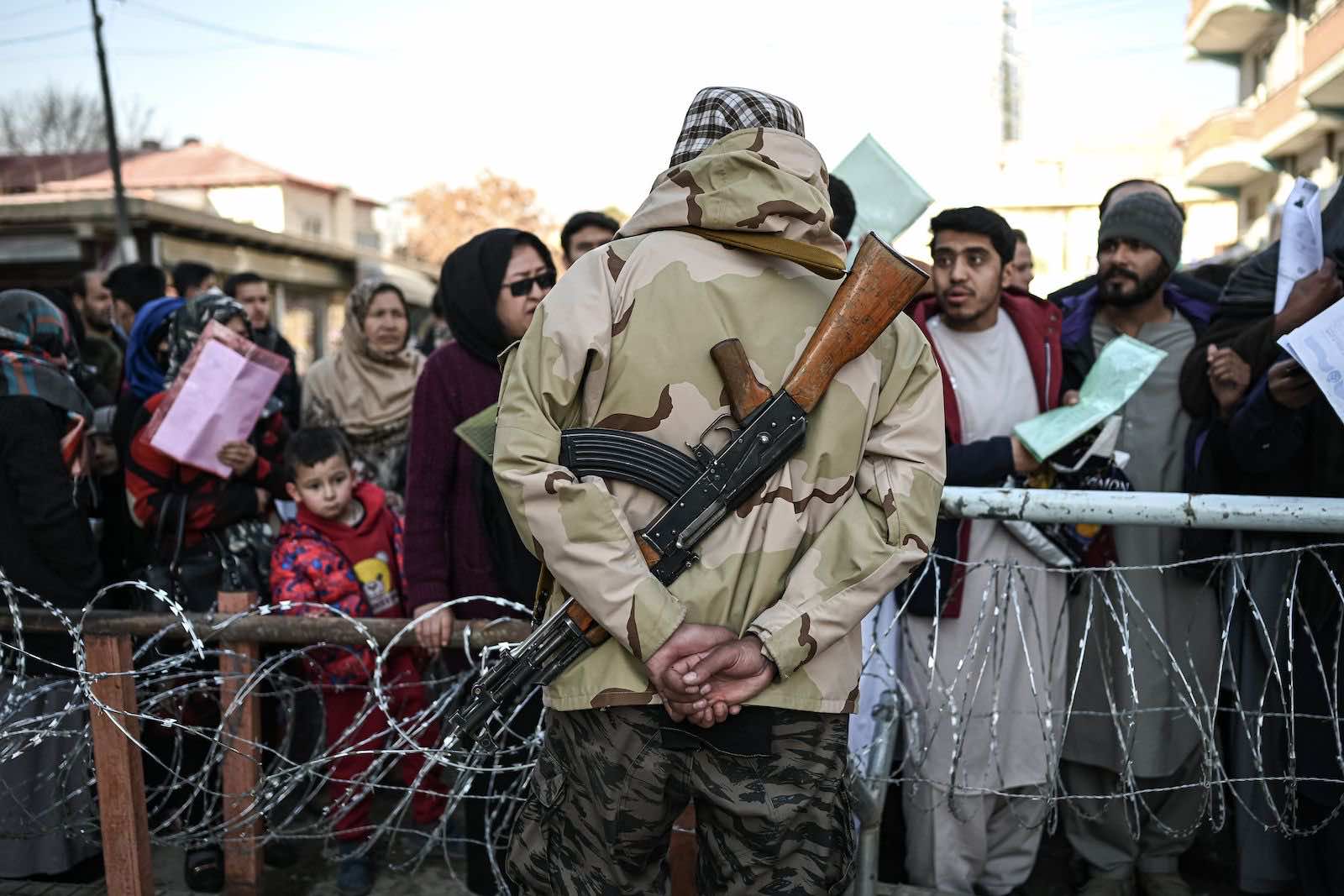 A Taliban fighter stands guard as people queue to enter the passport office at a checkpoint in Kabul this month (Mohd Rasfan/AFP via Getty Images)
Published 31 Dec 2021 08:00   0 Comments       Follow @lowyinstitute

US forces and their allies debated the same question with varying intensity for 20 years after the 9/11 attacks. Afghanistan: To leave or not to leave? Syed Fazl-e-Haider:

The Taliban has already warned the US-led forces against extending their presence and demanded they stick to the Doha agreement. Any unilateral decision by the US and NATO could escalate tensions and restart conflict with the Taliban, derailing the already fragile peace process in the country.

Afghans are stunned that the Americans packed up and left without the slightest courtesy of communicating their exit to an ally that lost at least 703 security forces personnel in June alone and over 64,100 troops since the war began in October 2001. The ensuing silence at Bagram airbase to many Afghans symbolises that their country has been abandoned and left to defend itself against the onslaught of the Taliban.

The lightning march of the Taliban into Kabul in August caught much of the world by surprise. Susanne Schmeidl:

We are awash with analysis offering reasons why. A propped-up state with limited local legitimacy, self-interested and corrupt elites that did not pay the army, an increasingly isolationist and polarising president, and a poorly negotiated exit by the United States. Researcher Ibraheem Bahiss summed up why the rest of the world could not lift its head out of the collective, perhaps Covid-induced, fog: “We caused all this not because the signs weren’t there. But because we were caught in our own hubris and imagination.”

But it was, according to Rodger Shanahan, the right time to go.

US President Joe Biden appears to be someone who wants to be certain that the strategic aim he sets for the military on operations is both achievable and worth the lives of those service men and women who may die because of the orders he gives. In Afghanistan he felt that the mission no longer justified that risk.

It is hard to separate fact from fiction at a time when information amounts to heavy artillery in a broader political battle for support. Claims that Pakistan supports the Taliban in a “double game” is one such fiction that has persisted despite evidence to the contrary.

Melissa Jardine wanted the West to take responsibility for women exposed to danger.

Women police are at particular risk because they are often seen as transgressing gender norms and “moral” boundaries of what is acceptable within religious and conservative practices and norms. Women police are not only at risk of assassination, violence or reprisal from violent extremists, but also from the community and their own family members.

Why was the US intelligence community seemingly blindsided? Ben Scott:

The speed of the Taliban’s success seems due less to its military prowess and more to the perceptions and decisions of various parts of the Afghan National Security Forces. Those who had been willing to fight were no longer. Their choices were shaped by the decisions – or the anticipated decisions – of those around them. And when a conflict reaches a tipping point like this, other things change. Previously dependable sources of information become far less reliable.

The Taliban’s rule would have consequences for the strategic balance in South Asia, wrote Stuti Bhatnagar.

For Pakistan, resurgence of the Taliban in Afghanistan offers significant opportunities. When the group first surged in the 1990s, support to the Taliban allowed Pakistan a chance to establish strategic depth vis-à-vis India via what it saw to be a friendly regime. … India, on the other hand, enjoyed better relations with Afghan governments except during the years of Taliban rule.

Beijing traditionally looked with discomfort at the presence of US troops in Afghanistan, urging Washington to withdraw. Now, as the security situation in Afghanistan deteriorates, China has changed tack, criticising the US for the “abrupt” nature of its exit. While not baseless, such criticism is indicative of Beijing’s growing anxiety about Afghanistan’s trajectory.

Nor was the terrorist threat extinguished. Amira Jadoon, Andrew Mines and Abdul Sayed:

As the Afghan Taliban now transition into a legitimate political entity, the nature of their clashes is likely to change as Islamic State- Khorasan Province (ISK) will tackle the Afghan Taliban as more of a state actor – whose credibility can be undermined domestically and internationally.

Donald Rothwell asked would whether the Taliban would win international recognition.