Hosting the tournament is a chance to show off to the world, and offers a snapshot of perceptions of the host country.

The real deal began on Thursday night in Moscow, when Russia trounced Saudi Arabia 5-0 in the first match of the 2018 FIFA World Cup.

The stories, both sporting and political, emerging from Russia over the next month will be watched closely by the Cup’s next hosts in 2026, Canada, Mexico, and the US. The three countries, collectively known as the “United” bid, won the vote over Morocco for hosting rights at the FIFA Congress in Moscow on Thursday.

Hosting the World Cup is a unique opportunity for a country to gain a soft power bounce. It offers a chance to show off your culture, people, and infrastructure, and your team becomes a sentimental favourite.

After eight years of careful planning, you put on the biggest show on Earth. More than a billion people watched the 2014 final between Germany and Argentina. A million visitors are expected in Russia for the tournament.

And it is big business. FIFA hauled in more than US$5 billion for the 2014 Cup in Brazil, but only the best organised hosts turn a profit for themselves. The United bid projects revenues of US$11 billion.

The bidding process and FIFA itself have an unenviable reputation. In 2015, then president Sepp Blatter stood down following the indictment on corruption charges of 14 people associated with FIFA.

In reaction, FIFA overhauled the voting system. In 2010, the FIFA executive committee cast 22 secret votes to award the hosting rights in 2018 to Russia, and in 2022 to Qatar – a country that has never played at a World Cup before. This year, more than 200 FIFA member-nations held an open vote.

The vote came down to two. Morocco also sought the hosting rights, although a FIFA technical report nearly disqualified its bid. On FIFA’s five-point readiness scale, the North Africans scored 2.7, while the “United” bid scored 4.0. With strong early indications of support for the United bid, plus its logistical advantage, the race for 2026 had been seen as a foregone conclusion.

The US President naturally made sure to politicise the process. On Twitter he linked US support at the United Nations to countries who voted for the North American bid.

The U.S. has put together a STRONG bid w/ Canada & Mexico for the 2026 World Cup. It would be a shame if countries that we always support were to lobby against the U.S. bid. Why should we be supporting these countries when they don’t support us (including at the United Nations)?

His earlier reference to Haiti and African nations as “shithole countries” and threats to ban Muslims from the US led to speculation of a surge in votes for Morocco.

Yet in the end it did not matter. The United bid was insulated from the Trump factor by Canada’s and Mexico’s involvement, and won 134-65. But it begs the Eurovision question: who voted for who, and how did geopolitics and pettiness play into the decision?

Despite the bonhomie on show in Singapore between Trump and Kim Jong-un, North Korea voted for Morocco, as did China and, interestingly, Taiwan.

Qatar voted for Morocco, while its blockading neighbours Saudi Arabia, United Arab Emirates, and Bahrain voted for the United bid.

Considering recent wobbly relations, France might have taken some joy in voting for Morocco.

Iran could not bring itself to vote for either bid.

And Russia, in a move to warm Trump’s heart, voted for United. 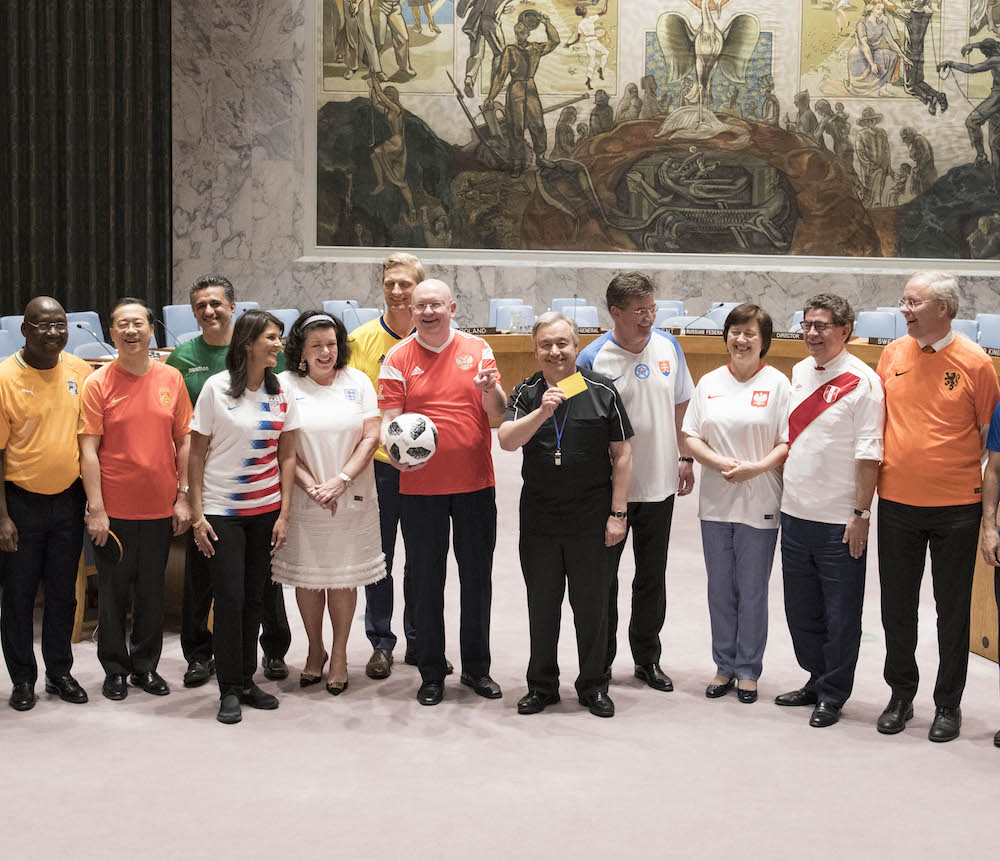 For Russian President Vladimir Putin, winning the rights to the 2018 World Cup in 2010 was a huge opportunity to show off Russia to the world.

In Beijing, Putin watched on as China used the 2008 Olympics to mark its arrival on the world stage as a confident and rich superpower. But what the Olympics did for China, the World Cup is unlikely to do for Russia.

Over the past eight years, the fate of Russia’s national team has mirrored its country’s economic circumstances and relations with the West. Its FIFA ranking has fallen from 13 in 2010 to 70 in 2018. Russia’s GDP was growing at 4.5% in 2010, but then Russia's economy contracted for two years and in 2017 it achieved just 1.5% growth.

Russia has annexed Crimea, used force in eastern Ukraine, and remains heavily involved in the conflict in Syria. It stands accused of downing flight MH17 over Ukraine, meddling in the 2016 US presidential election, killing opposition politicians and journalists, and using a nerve agent against a defector in England.

And Russian football has a dark recent history of security issues, including racist attacks, homophobic chants, and hooliganism. Outbreaks of violence are unlikely to occur while the eyes of the world are on Russia, but if they do they will add to already dipping perceptions of the country.

My favourites for the final on 16 July? The Germans. But the prospect of handing over the trophy to the German captain might be enough to make Putin stay at home.

Show Comments
Previous Article
The US and the West: with friends like that ...
Next Article
Weekend catch-up: Singapore summit, China–Pakistan, and diplomacy at the World Cup